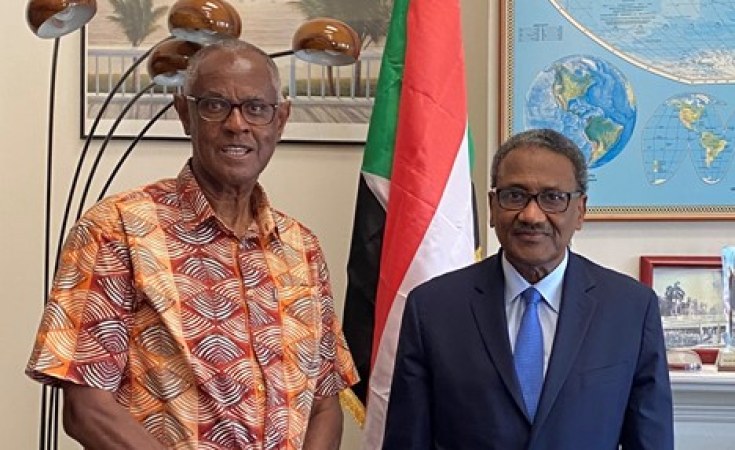 Washington, DC — The Constituency for Africa (CFA), a Washington, DC based education and advocacy organization, organized a virtual forum on Thursday, March 18th, focused on developments in the Sudan following the overthrown of longtime dictator Omar Al-Bashir in 2019.  The event was organized in partnership with the Africa Trade Desk in Ottawa, Canada and entitled, “Sudan:  Challenges of Democratic Transition”!

The forum was moderated by the Constituency for Africa President, Melvin Foote, and featured remarks from the new Prime Minister of Sudan, the Honorable Abdalla Hamdok, Congresswoman Karen D. Bass, (D-CA) , the Chair of the House of Representatives Sub-Committee on Africa, Ambassador Nureldin Satti, Sudan’s Ambassador to Washington, and Ambassador Tariq Abusalih, Sudan’s Ambassador to Canada.

An esteemed group of panelists followed, that included General William “Kip” Ward, the Founding Commander of the U.S. Africa Command; Susan Namulindwa, the Director of the Africa Trade Center in Canada, Dr. Nagmeldin Karamalla, a Senior Political Scientist based at the University of Poland, Dr. Sulma Mohammed, a Professor of Cancer Biology at Purdue University, and well-known Anthropologist and Afrocentric Historian, Dr. Runoko Rashidi.

Melvin Foote was pleased with the forum and had this to say, “I have personally been involved with Sudan since the early 80s, and led a small delegation to Sudan in 2000 and again in 2001, to meet with the Sudanese government and civil society around strategies for ending the war in the south, which had resulted in more than 500,000 deaths and untold numbers displaced.  We also discussed ideas for ending the punishing sanctions that were placed on Sudan by the U.S. and other western governments because of Sudan’s support of terrorism!  Sudan has made tremendous progress since the overthrow of the dictator Omar al-Bashir in 2019, and the sanctions were removed by former President Donald Trump!  However, retarting the Sudan economy, addressing challenges including border disputes resulting from Ethiopians intent to build a dam on the Nile River downstream from Sudan and Egypt, and challenges in addressing the global pandemic of COVID-19, clearly makes a very challenging situation even more challenging.”

The CFA forum focused on the role of Diaspora in North America in supporting Sudan, and building friends for the economic and social transformation now underway in the country!

World Bank Strengthens Its 'Marshal Plan' for the Poor in Sudan

Next Story
Tagged:
Copyright © 2021 Constituency for Africa. All rights reserved. Distributed by AllAfrica Global Media (allAfrica.com). To contact the copyright holder directly for corrections — or for permission to republish or make other authorized use of this material, click here.