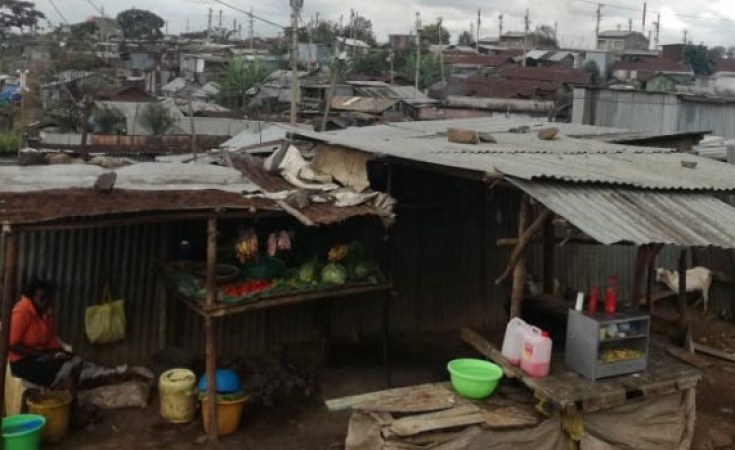 Only a fifth of global climate finance contributions have so far gone towards adaptation, with most support focused on cutting greenhouse gas emissions in developing countries.

NAIROBI, March 26 (Thomson Reuters Foundation) - Rich countries must provide more finance to help the poor cope with the impact of global warming, residents of Kenya's biggest informal settlement told the president of the COP26 global climate talks as he visited on Friday.

"The climate has changed a lot. We experience heavy rains more and this brings flooding which damages houses, brings diseases to our children and causes deaths," said Faith Ondiek, a weather forecast provider or 'Mtaani' with the DARAJA project.

"The message we want the president to take back to global leaders is that we are doing what we can to deal with climate change, but we need help. The rich nations must contribute some funds so we can improve our lives in the face of this threat."

Sharma said Britain would place adaptation and resilience "front and centre" during its presidency of COP as he praised the forecasting project.

"Globally as extreme weather events become more frequent and more severe we need to build resilience among the most vulnerable communities," Sharma said in a statement.

Governments will submit updated national action plans to reduce planet-warming emissions and adapt to a hotter climate ahead of the COP26 summit in Glasgow in November.

Sharma's visit aimed to show that COP26 was not just focused on the West bringing down their carbon emissions, but also on garnering the finance so that countries like Kenya could adapt, said a British official.

Ministers from a number of countries will meet virtually next Wednesday ahead of the summit to identify practical next steps for climate vulnerable communities.

Developed countries agreed at the United Nations in 2009 to jointly contribute $100 billion each year from 2020 in climate finance to poorer countries, many of which are grappling with rising seas, storms and droughts made worse by climate change.

But only a fifth of global contributions have so far gone towards adaptation, with most support focused on cutting greenhouse gas emissions in developing countries.

In Kibera, a sprawling informal settlement housing more than 200,000 people living cheek-by-jowl in makeshift homes, the change in weather patterns - in particular increased rainfall over a shorter period of time - has had a devastating impact.

Due to poor drainage and garbage collection, floods are a common occurrence - not only destroying homes and possessions, but also contaminating drinking water and even causing deaths through building collapses, electrocutions and drownings. DARAJA provides localised weekly forecasts from the Kenya Meteorological Department, which are translated into Kiswahili and local slang Sheng and sent out daily via SMS, WhatsApp and radio.

The forecasts provide actionable information, telling residents to avoid a particular route as it may be flooded, or advising parents not let children play near the river as heavy rains are expected.

The Mtaani leaders also organise clean-ups of the river and drainage areas, ensure electrical cables are out of harm's way, and advise residents to add waterproofing materials to their homes when heavy rains are forecast.

"The DARAJA project has been an effective way to get the information out," said Pascaline Chemaiyo, principal meteorologist at the Kenya Meteorological Department.

"The project has formally finished, but the team members are still continuing the work as the community have found it very helpful and it has helped to make them more climate resilient."