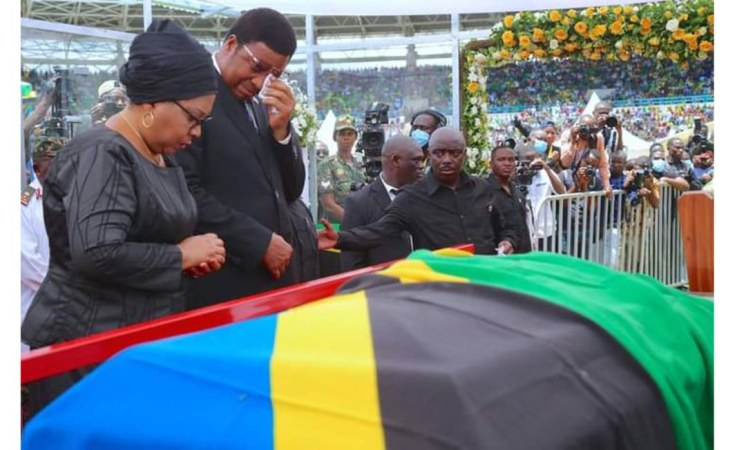 John Magufuli has been buried nearly 10 days after passing away at the age of 61, officially from heart complications. The late head of state was an ardent coronavirus skeptic.

Tanzania's late president, John Pombe Magufuli, was buried on Friday in his ancestral home of Chato, nearly 10 days after his death from suspected heart complications.

Magfuli's body was moved through different towns in Tanzania to allow for public mourning.

Close family, relatives and friends of the ardent coronavirus skeptic also attended the private funeral service in Chato in the northwest of the country.

Many Tanzanians followed the proceedings on live TV and radio in the country of 60 million where the populist leader was admired by many for his pugnacious style of leadership and action against corruption.

Magufuli's body lay-in-state as members of the public bid him farewell.

He passed away on March 17th from what aides described as heart problems. But opposition leaders charge that he died of complications from COVID-19.

Thousands lined up as the hearse containing the coffin made its way into the grounds on Thursday, accompanied by military vehicles.

What legacy did Magufuli leave?

He said that Magufuli left a legacy in all sectors including education, finance, transport and others.

Others, however, are critical of his legacy, saying his rule reduced fundamental freedoms of expression and assembly.

Before his death, he had declared that Tanzania was "COVID-free" thanks to three days of national prayer.

The late head of state would later express doubt on the safety of masks and vaccines, branding both a western conspiracy.

Tanzania officially only has 509 infections and 21 deaths, however this vastly understates the extent of the pandemic.