South Africa Court Set to Rule On Jacob Zuma, and an Era of Impunity 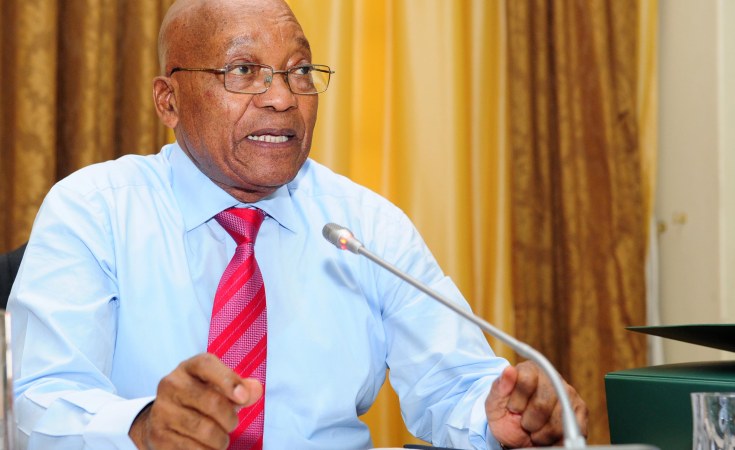 Johannesburg — For nearly three years, South African investigators have been unearthing a web of corruption around former President Jacob Zuma in a public inquiry that has captivated the country.

There were bribes paid in top-shelf whiskey, luxury cars and a cash-stuffed Louis Vuitton bag. High-ranking officials distributed lucrative government contracts in exchange for monthly handouts. That era of graft drained tens of billions of dollars from state coffers and has become one of the most infamous chapters of South Africa's post-apartheid history.

Now, the country's highest court will determine whether Mr. Zuma can be held accountable for contempt of court, and for an era of consequence-free corruption, in a hearing that represents one of the greatest tests for South Africa's democratic institutions in recent years.

"This is an absolutely critical moment: The principle that all people will be equal before the law is being challenged and the constitutional system itself is being challenged," said William Gumede, the chairman of the Democracy Works Foundation, a South African nonprofit group. "Essentially, the former president is saying he is above the law of the country, he is above the Constitution, he is untouchable."

The hearing, taking place before the Constitutional Court on Thursday, comes a month after Mr. Zuma defied a court order to appear before corruption investigators, a move that challenged the legitimacy of South Africa's legal system and prompted the chief investigator to seek a two-year prison sentence for Mr. Zuma for contempt of court.

The Constitutional Court is unlikely to impose such a harsh sentence when the verdict is announced in the coming weeks. Doing so could set off mass protests by supporters of Mr. Zuma and destabilize the country as it reels from the worst coronavirus outbreak on the continent, an economy battered by the pandemic and record-high unemployment.

Nonetheless, the hearing is seen as an important moment for South Africa, which has been plagued with corruption over the last decade, with few officials held accountable.

Speaking at the virtual hearing on Thursday morning, a lawyer for the corruption inquiry framed Mr. Zuma's refusal to testify and recent attacks disparaging the high court as a fundamental threat to the country's democracy.

"There is a real risk, a threat, to the authority of the judiciary as a whole," said the lawyer, Tembeka Ngcukaitobi. "His conduct must be seen for what it is: We are dealing with a cynical maneuver to avoid accountability."

Mr. Zuma and his legal team did not attend the virtual hearing to respond to the contempt charges -- a move that analysts say is all but unheard-of in such a high-level case.

The case has also underscored the challenges facing the African National Congress, the party of Nelson Mandela that has governed the country since the end of apartheid in 1994. During Mr. Zuma's nine-year tenure, the party became consumed by corruption scandals that tarnished its image and fueled public outrage over mismanagement.

After Mr. Zuma was ousted from the presidency in 2018, the A.N.C. became increasingly polarized between loyalists of the former president and supporters of his successor, Cyril Ramaphosa, who vowed to crack down on corruption and restore the public's confidence.

Fierce resistance to Mr. Ramaphosa's efforts from within the A.N.C. have cast serious doubts over his ability to deliver on that promise.

But analysts say the high court hearing on Thursday may be the beginning of a turning point. Not only does Mr. Zuma face a possible prison sentence from the outcome, but he will also stand trial in May for accusations that he took bribes from arms dealers in the 1990s.

"For 15 years or more, Jacob Zuma has been using the strength of the South African court system to put off his day in court" by appealing cases against him, said Richard Calland, a constitutional law professor at the University of Cape Town. "But he is now running out of legal runway. This is the moment where he finally meets his Waterloo legally."

Mr. Zuma has denied all accusations from both cases. In recent months, he has also accused the corruption inquiry's leader, Deputy Chief Justice Raymond Zondo, of harboring a personal vendetta against him, and attacked the investigation itself.

Established in 2018, the investigation is known as the Commission on State Capture, a term that has become a buzzword in South Africa and refers to corruption at such a high level that private groups effectively purchased the power to divert state resources into their own hands.

The commission has interviewed more than 250 witnesses in televised hearings that have become a telenovela of sorts about the country's deep-seated corruption. It is expected to end in June, and deliver a report to South African officials that could include suggestions for prosecution.

Taken together, the testimonies paint a damning portrait of post-apartheid South Africa, where relationships between former freedom fighters in business and government transformed into criminal enterprises and elites manipulated efforts designed to shift economic power from the country's white minority to Black South Africans to line their own pockets.

At least 40 witnesses have directly implicated Mr. Zuma in arrangements to plunder tens of millions of dollars from state companies. In total, an estimated $33 billion was siphoned from state coffers during his tenure, which ended in 2018 amid public outrage over graft and bitter infighting within the governing party.

For months, many South Africans have anticipated a climactic moment when the former president would appear before the panel and investigators could demand a response to the nearly three years worth of evidence laid against him.

But that moment of reckoning seems unlikely to ever arrive. At the contempt hearing on Thursday, the commission's lawyer, Mr. Ngcukaitobi, conceded that investigators had abandoned hope that Mr. Zuma will ever testify.

"It is clear that the situation has escalated beyond what the commission could have anticipated," he told the nine justices, who appeared on Zoom in dark green robes with photos of the grand courtroom's red brick wall and large South African flag as their backdrops.

"The public has been deprived," Mr. Ngcukaitobi said, "of an opportunity to hear from Mr. Zuma, to hear his version, to get an explanation."

Previous Story
South Africa Faces Biggest Constitutional and Political Crisis Since 1994
Next Story
Could ConCourt Punishment of Zuma Lead to the Making of a Martyr?

Could ConCourt Punishment of Zuma Lead to the Making of a Martyr?

Next Story
Tagged:
Copyright © 2021 Democracy Works. All rights reserved. Distributed by AllAfrica Global Media (allAfrica.com). To contact the copyright holder directly for corrections — or for permission to republish or make other authorized use of this material, click here.