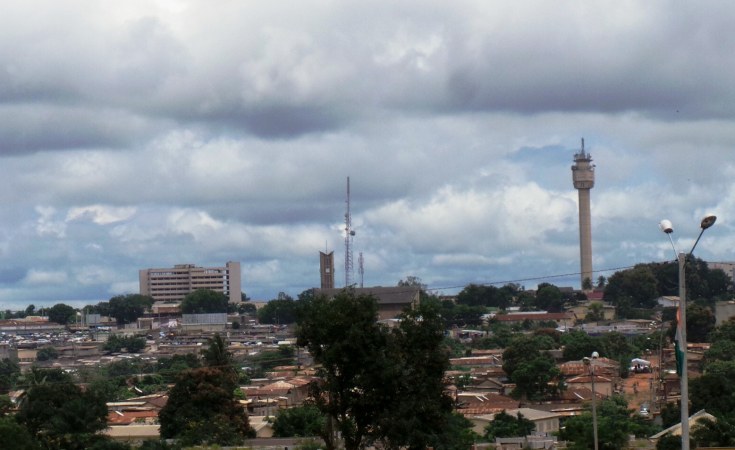 Criminal proceedings open in Paris on Monday over the 2004 attack by two Ivorian warplanes against a French military base in Bouaké, Cote d'Ivoire, killing nine French soldiers and an American civilian. More than 16 years later, the suspected pilots will be tried in absentia for murder, attempted murder and destruction of property.

"We know who are the killers and they're free," says Edwige Laliche, who lost his son in the attack, which also injured 38 people and resulted in the French army putting the Ivorian air force out of action.

None of the suspects will appear in the dock of the French court. Former Belarusian mercenary Yury Sushkin, a pilot of one of the Sukhoi aircraft has disappeared, and the two Ivorian co-pilots, Ange Magloire Gnanduillet Attualy and Patrice Ouei benefited from an amnesty law in 2007.

"They've destroyed me, destroyed my life," says Laliche, speaking to RFI's Laura Martel. "There's a case 16 years later and they're not there, that's maybe the hardest thing."

Families of the victims may find it hard to get any more closure from the legal proceedings in France given the absence of the accused.

There remains many unanswered questions about the attack on 6 November 2004, notably who ordered the raid on the French base hosting troops part of Operation Licorne, deployed during the Ivorian civil war.

Cote d'Ivoire was split in two at the time with forces loyal to former President Laurent Gbagbo in the south, and rebels supporting Guillaume Soro in the north, with a UN peacekeeping force and French troops stuck in the middle.

Victims of Bouaké airstrikes still wait for justice, 15 years after

Despite a ceasefire signed in 2003 and against the advice of then-French President Jacques Chirac, Gbagbo launched an offensive to take back territory from the rebels, notably Bouaké - the seat of the rebellion.

After having bombarded rebel positions from early morning to midday, the Ivorian Sukhoi fighter jets targeted the French base.

Ivorian authorities claimed the attack was not intentional, but the French government insisted it was deliberate.

However, the claim that the attack was in fact an error have been disputed by witnesses and details of the circumstances of the raid. So who did give the go ahead for the bombardment?

"We have a simple explanation," says lawyer Lionel Béthune de Moro, saying that these were Ivorian planes, so it was therefore an Ivorian decision.

Yet further information on who gave the order is less clear, according to Béthune de Moro - "was it the head of state, the army chief - it's not so simple in a country in crisis split in two".

"But of course, what my clients want, above all, is the truth. Who authorised this attack?" the lawyer adds.

For those who believe the Ivorian authorities were responsible, the goal of the air attack was to cause France to reconsider its deployment in the West African country, withdraw its troops, as well as divert attention away from the difficulties Gbagbo encountered in retaking rebel territory.

Nevertheless, this theory is somewhat complicated by a murky affair in Togo when 10 days after the attack Togolese authorities arrested eight Belarusians, which some believe could suggest French complicity.

The Belarusians nationals were suspected of being linked or in fact responsible for the bombardment in Bouaké.

"The reality for me is extremely simple," says lawyer Jean Balan, acting for the majority of civil parties, describing how those in positions of power at the top of the French government were responsible for the Bouaké attack.

"Look it's Gbagbo who attacked us, let's get rid of him," says Balan, outlining the argument that the attack was used as an excuse to remove Gbagbo.

Balan, who has worked on the case for past 16 years, claims responsibility must go to the upper echelons of French government, given that players such as Alliot-Marie or de Villepin could not stop the Belarusians slipping through their fingers, and therefore face French justice.

In February 2016, judge Sabine Khéris considered that "everything was orchestrated with the aim of making it impossible to arrest, question or judge the Belarusian authors of the attack".

She said the decision to do nothing about the pilots arrested in Togo was taken in concert by the interior ministry, defence ministry and ministry of foreign affairs.

Khéris referred the case to the Law Court of the Republic, the only court able to judge government ministers on decisions taken during their time in office.

On 17 May 2019, the case filed with the court was dismissed and it was decided that the three former ministers would not be forced to give testimony.

It was decided that the "inaction" of these ex-ministers was not sufficient enough to force them to appear before court, and the suspicions that they had somehow interfered did not hold water.

The three ministers are, nevertheless, expected to appear as witnesses in the trial that opens this week.

Their testimonies is highly anticipated, even for those who do not believe in the theory of some sort of French conspiracy in the Bouaké bombing.

"Having arrested the pilots, mercenaries, and then released them, it's still incredible," says Jean-Paul Roko, a former soldier who was at the base during the attack, questioning why they did not given the green light to have them transferred to France.

"If there are any military secrets, you have to give them up, we want answers," he adds.