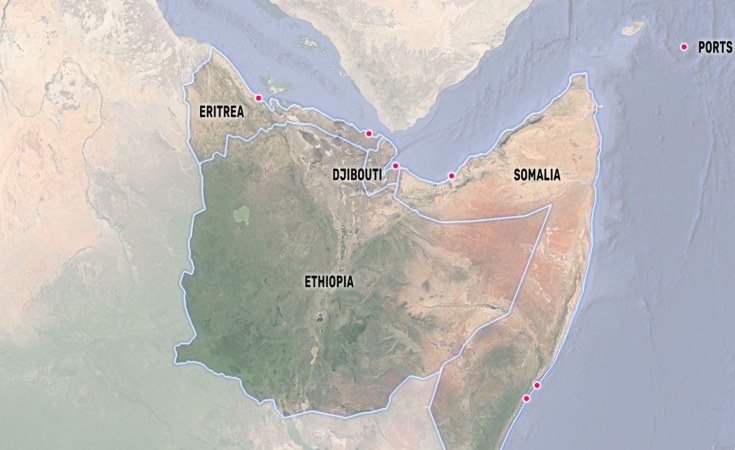 VOA
A map of ports in the Horn of Africa.
The Ethiopian Herald (Addis Ababa)
By Getahun Legesse

Addis Ababa — Ethiopia is executing due activities to re-access Eritrean ports of Massawa and Assab whilst the Eritrean side is currently renovating the ports facilities to handle Ethiopia's shipment and provide seamless service for the future traffic, Ministry of Foreign Affairs (MoFA) said.

Dina further stated that Ethiopia and Eritrea's move to economic integration would have a paramount importance to the peace and stability of the Horn of Africa.

Apart from sharing borders and communities, Ethiopia and Eritrea were one state that is believed to be the main factor for the unique cultural and social bonds the two states have enjoyed.

"What owned by Ethiopia is lacked by Eritrea and what they have is not with us," he said, adding that Eritrea's extensive coastline avails a good opportunity to the land locked Ethiopia's import-export trade.

Noting the positive relationship between Ethiopia's economic growth and its utilization of Eritrean ports, he expressed his optimism about the joint use of the outlets to the benefit of the people and economies of the two countries.

As to Dina, both leaders of Ethiopia and Eritrea have strong desire to put the relationship in a solid base and held commendable deliberations on ways to cement the partnership.

During his two-day visit to Asmara, Ethiopian delegation led by Premier Abiy held a fruitful discussion with the Eritrean leadership and the parties reached a consensus to excel the two countries bilateral relations in political and economic frontiers including reponing of the border.

Involving the border communities in Ethiopia's Tigray State and the Eritrean side has given due attention by the leaders so as to restore the two countries people-to-people ties, the spokesperson remarked.