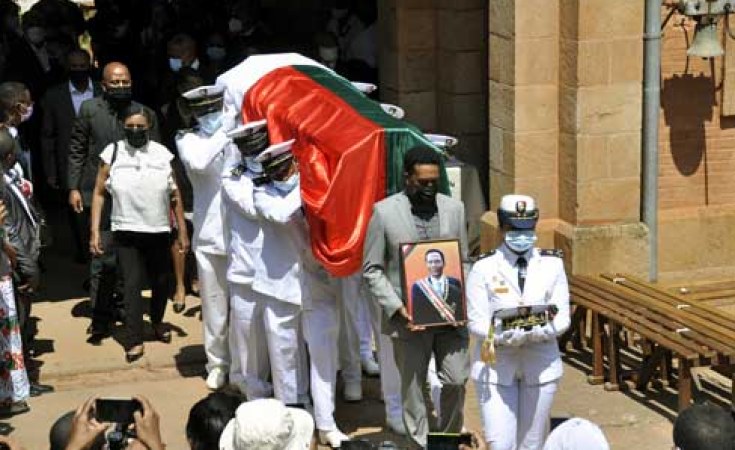 Didier Ratsiraka, who was Madagascar's president twice for a combined period of 21 years, has died at the age of 84.

Ratsiraka was a controversial figure. Nicknamed the "Red Admiral" for his socialist policies, he was a national hero and great patriot for some, for others a ruthless dictator with policies that led to the ruin of the national economy and the country's cultural heritage.

His ascent to power was largely due to his military career. He was a naval officer and instrumental in the creation of the national navy. In 1972, he was appointed as the Minister of Foreign Affairs.

When Ratsiraka became Madagascar's leader in 1975, it was a time of socio-political upheaval. After independence from France in 1960, the First Malagasy Republic was led by the Social Democratic Party and its leader, Philibert Tsiranana. Tsiranana was forced to resign and hand over power to the military, led by General Gabriel Ramanantsoa, in 1972. Colonel Richard Ratsimandrava replaced Ramanantsoa, but was assassinated after just six days in office. Ratsiraka was then appointed leader.

Ratsiraka went on to rule the island nation for 17 years as president of the socialist regime he created from 1975 to 1992. He returned to power four years later as the second president of the Third Republic from 1997 to 2001.

Ratsiraka had a strong socialist ideology. When he became president in 1975, he wrote a new socialist constitution and a book known as the Boky Mena - the "Red Book". Madagascar's development was to be guided by the socialist principles laid out in the Boky Mena.

Madagascar has had more than 10 presidents since attaining independence from France, but none have dominated the political landscape of the country more than Ratsiraka. As a specialist on Madagascar's politics, I argue that Madagascar today is in many ways the product of Ratsiraka's political decisions and actions.

Despite all the good things Ratsiraka might have done for the country, there are two legacies that stand out.

First is the country's deep poverty. While Madagascar was among the most advanced African countries at independence, it is now ranked among the poorest in the world. The World Bank estimates that 77.4% of the population lived below the international poverty line of $1.90 a day in 2020. It was 46.1% in 1980 and increased to 70% in 1992, when Ratsiraka left power for the first time.

Second is the lack of education (or miseducation) of its young people. After two decades of socialism and "Malgachisation" (use of the Malagasy language as an educational language) under Ratsiraka, Madagascar had one of the worst education systems in the world.

These two legacies overshadow any others - positive or negative - that could be credited to Ratsiraka's 21-year rule.

Madagascar's economic decline started in the early 1970s. This was caused by a variety of factors including political instability, an oil crisis in 1973 and also capital flight due to nationalisation of the economy.

Under his socialist regime, Ratsiraka promised to make Madagascar a self-sufficient country. Instead, there was scarcity and basic necessities were heavily rationed. The gross national income per capita (GNI per capita), a measure of a country's wealth but which ignores how that wealth is distributed across the population, dropped from its peak of $858 in 1971 to $762 in 1975. The decline continued under Ratsiraka's government, it stood at US$484 when Ratsiraka left office for the first time in 1992.

The nationalisation of economic sectors that had been held by the French started with the previous military regime, but it was intensified under Ratsiraka's socialist regime. Key sectors were nationalised included banking and agriculture. This led to massive capital flight that worsened the economic situation. To compensate for the flight of capital, Ratsiraka's government had to borrow heavily in order to make massive investments, which were for the most part unproductive. As a result, the national debt also increased exponentially.

Less than three years after taking power, there was growing popular opposition to Ratsiraka's government. In 1977, anti-government demonstrations erupted in the capital city, Antananarivo, because of severe shortages, including food and essential commodities.

Under Ratsiraka, there was a determined push for "Education for All", but it was an experiment without proper planning or resources. He tried to achieve, in a few years, what had not been done for generations.

Within a couple of years, Ratsiraka wanted to build one primary school in each fokontany (neighborhood), one middle school in each firaisana (an administrative unit between a neighborhood and a county), one high school in each fivondronana (county), and one university in each faritany (province). But there weren't enough financial resources to build these schools or enough staff and teachers to run them.

Instead of educating everyone, they ended up with students who did not know what they were supposed to know at the grade levels they were in. Several generations of Malagasy - especially those completing their secondary education from the 1970s to the 1990s - had a very poor education. They are widely known as the "Sacrificed Generation".

The economic and political elites flooded private schools. In the 1991 academic year, about 5,800 students were enrolled in private French-sponsored schools, the most prestigious of the education system. Another 199,000 students were enrolled in private Roman Catholic schools. The vast majority (an estimated 1.5 million students) found themselves trapped in the public school system.

The regime started to buckle under the weight of a growing opposition voice. Several thousand people demonstrated against the government in 1991. Security forces opened fire on the crowds outside the presidential palace, about 130 people were killed.

Ratsiraka managed to be democratically re-elected once more in 1997, when Zafy was impeached due to alleged political corruption. He now described himself as a "humanist and environmentalist".

Ultimately, it was Marc Ravalomanana (president from 2002 to 2009) who brought an end to his political career. The presidential election of 2001, which pitted the veteran Ratsiraka against the new comer and wealthy businessman, Ravalomanana, was highly contested and ended up in another political crisis and even a low level civil war.

Despite all of the mediation deployed by the Council of Christian Churches in Madagascar, the African Union, and other entities, the electoral conflict was not resolved. Ratsiraka eventually lost in court and fled to France in 2002.

Ratsiraka returned to run for office one last time, in 2018, but he was no longer a major political actor. He didn't even garner more than 1% of the vote.

Throughout his life, Ratsiraka fought hard to lead Madagascar. But what kind of country did he leave behind? One of the poorest in the world with an education system in tatters.

Ratsiraka will be remembered as a national hero for his supporters, and as the president who ruined his country by his opponents.