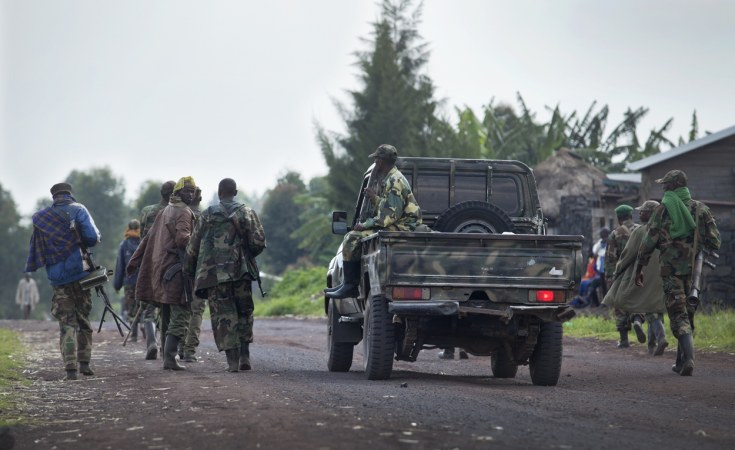 Sylvain Liechti/MONUSCO
M23 fighters loyal to Bosco Ntaganda move along the road towards Goma as peacekeepers observe a gathering of armed people north of the city on March 1, 2013.
Deutsche Welle (Bonn)

Dubbed the "Terminator," the former militia leader had appealed the ICC's 30-year prison sentence. The appeals chamber upheld both the verdict and the sentence.

The sentence, handed down in 2019 on 18 counts of war crimes committed in the early 2000s, is the longest in the court's history.

What was the previous ICC ruling?

Dubbed the "Terminator," the Rwandan-born 47-year-old was found guilty of crimes against humanity, including murder, sexual slavery, rape and using child soldiers.

The ICC convicted him in July 2019 and sentenced him in November 2019.

On March 8 this year, the ICC ordered a record $30 million (€25.3 million) in reparations to Ntaganda's victims.

The court said it was offering "collective reparations with individualized components" for possibly more than 100,000 eligible victims.

Judges said Ntaganda was a "key leader" of the Union of Congolese Patriots rebel group and its military wing, the Patriotic Forces for the Liberation of Congo.

The group operated on the eastern border of the Democratic Republic of Congo in 2002 and 2003, killing hundreds of civilians in the fight with rival militias over minerals in the region. Since 1999, tens of thousands of people have been killed in the area.

Who is Bosco Ntaganda?

Ntaganda was a former army general who later became a founding member of the M23 rebel group, which signed a peace deal with the government in 2013.

He was the first-ever suspected war criminal to surrender to the ICC in 2013 by walking into the United States Embassy in the Rwandan capital Kigali. An ICC warrant for his arrest was first issued in 2006.

He said during his trial that he was a "soldier not a criminal," insisting that the nickname "Terminator" did not apply to him. The name refers to the 1984 science fiction film depicting a relentless robot killer.

DR Congo Warlord Ordered to Pay Millions to Victims
Tagged:
Copyright © 2021 Deutsche Welle. All rights reserved. Distributed by AllAfrica Global Media (allAfrica.com). To contact the copyright holder directly for corrections — or for permission to republish or make other authorized use of this material, click here.