Congo-Kinshasa: The US Has Placed Sanctions On Isis-DRC, but Does the Group Even Exist? 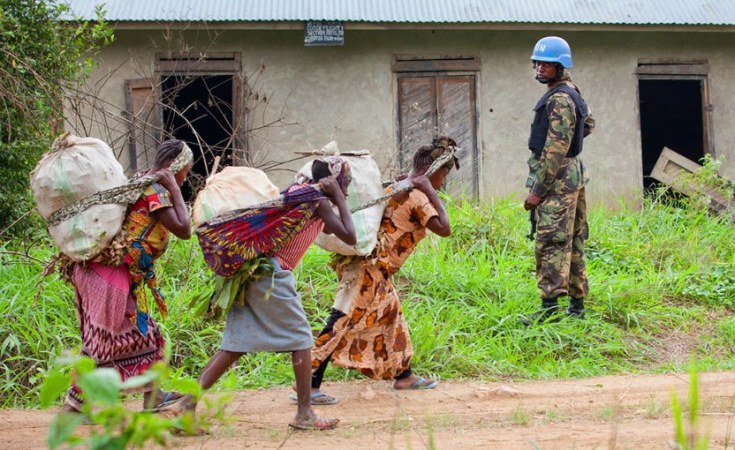 Sylvain Liechti/MONUSCO
A UN peacekeeper on patrol in the Beni region of the Democratic Republic of the Congo (file).
African Arguments
analysis By Robert Flummerfelt & Judith Verweijen

In recent interviews with detained ADF rebels, some hadn't even heard of ISIS.

On 10 March, the US Department of State designated a rebel group operating in the eastern Democratic Republic of Congo (DRC) as a foreign terrorist organisation. Referring to it as the "Islamic State of Iraq and Syria - Democratic Republic of the Congo (ISIS-DRC)", it placed the group under strict sanctions. It suggested that the rebel group - also known as Allied Democratic Forces (ADF) - has become part of the so-called Islamic State's Central Africa Province and warrants heightened action.

The announcement comes as US military advisers and the UN peacekeeping mission in the DRC have shown a renewed interest in supporting Congolese forces conducting operations against the ADF. The rebel group has operated in the DRC since the 1990s, long before ISIS gained international prominence. Apparently US officials believe that its modus operandi and objectives have shifted now that it is part of global jihadist movement of ISIS.

Many analysts, however, disagree.

One argument for seeing ADF as part of ISIS is that its objectives and strategies have changed. According to a report by George Washington University's Program on Extremism and the Bridgeway Foundation, the ADF's current leader Seka Baluku has reoriented the group's raison d'être from overthrowing the Ugandan government to the "establishment of an Islamic State inside DRC as part of a global caliphate".

In making this case, the report cites an ADF video in which "children can be heard repeating in Arabic the Islamic State's infamous motto: 'Remaining and expanding!'" It explains that ISIS's "primary export" to its affiliates are its creed (aqeeda) and method (manhaj), which includes "territorial control and implementing authority". This is often achieved through capturing territory, holding cities and declaring a state.

It is questionable, however, as to whether the ADF has truly evolved in this way. The group has never previously shown any interest in capturing territory to govern civilian populations, only a small minority of whom are Muslim. It has mostly stayed secluded in the bush. Recent interviews with detained combatants, internal UN intelligence reports or accounts of kidnapped civilians indicate that there are no signs that this has changed. Rather, these sources saythat ADF primarily wants to be left alone. Its main message to local populations is that it will stop conducting mass killings when the army halts operations against it.

This suggests that the rebel group has not adopted the ISIS objective of "remaining and expanding", but simply of remaining. In fact, in the video cited by the report, the children can only be heard chanting the first half of the phrase: "baqiyah" (which is the same as the Swahili bakia).

It is true that, within its camps, the ADF has developed an extensive governance system with schools, prisons and health care structures. All the camps' inhabitants must abide by strict regulations based on Islamic law. But these purely internal governance structures long predate any links with ISIS.

Another reason to suggest that ADF is part of ISIS is that it has started to recruit fighters from across the region and has received funding through foreign ISIS associates. However, both these claims are dubious.

Firstly, ADF has contained fighters from different East African countries for a long time. A UN Group of Experts report in 2012 documents its recruitment networks operating across Burundi, Uganda and Tanzania and notes that the group is "increasingly targeting recruits from East Africa". The ADF's former leader Jamil Mukulu was in Tanzania when he was arrested in 2015.

Secondly, the evidence for alleged financial links with ISIS appears weak. There were allegations in 2018 that the group received funding through an alleged ISIS money handler in Kenya, but recent UN investigations do not mention these financial links. Much of the evidence for them relies on interviews conducted by "Ugandan authorities" and must be treated with caution, especially as numerous reports indicate that ADF combatants and suspected collaborators were tortured during interrogation by the Ugandan intelligence services.

In any case, external financing is not crucial for ADF's survival. According to recent interviews with detained ADF combatants, the group relies primarily on supplies obtained via looting and "business" operations in North Kivu.

According to the George Washington University report, more evidence of ADF's affiliation with ISIS can be seen in the increase of violence against civilians. It associates a spike in violence in early-2018 with then ISIS-leader Abu Bakr al Baghdadi's first mention of the Islamic State Central Africa Province (ISCAP). It adds that "these numbers were surpassed in 2019 when the ADF was finally recognized publicly by the Islamic State as part of ISCAP."

But correlation is not causation. Moreover, there is a much more plausible explanation for these patterns. Both those spikes in violence came immediately after the Congolese army and the UN mission MONUSCO conducted offensive operations against the ADF. Furthermore, the period preceding the 2018 violence was notable for both a lack of offensive operations and few rebel attacks against civilians. The most consistent ADF motive for violence continues to be reprisals to discourage offensive operations.

Some have also cited the ADF's use of improvised explosive devices (IEDs) as a sign of its ISIS links. But, in the words of UN reports and officials, these weapons remain "very rudimentary" and are used for "tactical, defensive reasons against the army, not as a terrorist tool". This stands in sharp contrast with the level of sophistication and function of IEDs used by ISIS.

In recent years, ISIS's central media units have started to claim attacks in the DRC. Meanwhile, the ADF has begun making reference to ISIS in its growing propaganda output.

This appears to be evidence of close communications, yet a 2020 UN report found that 35% of the attacks in the DRC claimed by ISIS do not correspond to actual incidents. Over 50% were inaccurate, misstating locations, dates or casualty figures.

Furthermore, ADF's propaganda remains diverse and at times makes no reference to ISIS at all. Rather than relaying a coherent message about being an ISIS affiliate, the group appears to tailor its output to its various networks. Most of its videos are primarily in Swahili and Luganda, suggesting they are targeting the same East African networks in which ADF has been embedded for decades.

Recent interviews with detained ADF combatants also indicate that knowledge of the group's connections to ISIS is uneven. Some even stated that they were unaware of the existence of ISIS altogether. This suggests that any links with the Islamic State are part of externally oriented rebranding rather than a consistently applied internal transformation.

The dangers of inaccurate analysis

The US labelling of ADF as ISIS-DRC suggests a much more fundamental transformation of the group than the current evidence allows for. This points to the risks of reading too much into propaganda, thereby inflating the significance of the Islamic State.

The ISIS-DRC narrative also leads to misdiagnosing the drivers of violence. This is deeply worrying if it contributes to an increase in offensive operations against ADF given that the rebel group has typically attacked civilians in response to such assaults. Moreover, the Congolese army itself has been implicated in past mass killings that were attributed to ADF.

Finally, making the struggle against ADF part of the global war on terror forecloses non-violent ways of dealing with the group. The ADF is no doubt a dangerous armed group that needs to be addressed, but the wrong narrative carries with it all the wrong solutions.

Robert Flummerfelt is an investigative journalist and human rights researcher based in DR Congo, where he has worked for more than three years, mostly in Beni. Notably, working with the Thomson Reuters Foundation and The New Humanitarian, Robert worked to expose a sex abuse scandal in the WHO and other agencies in Congo's Ebola response. Generally, he focuses on abuses in the aid sector, the war on terror in Africa, militant conservationism, and abuses of private power.

Judith Verweijen is a Lecturer in International Relations at the University of Sheffield. She has extensively published on militarisation, civil-military and civil-rebel relations, and violent conflict around natural resources. Her work focuses on eastern DR Congo, where she has conducted extensive field research for over a decade.