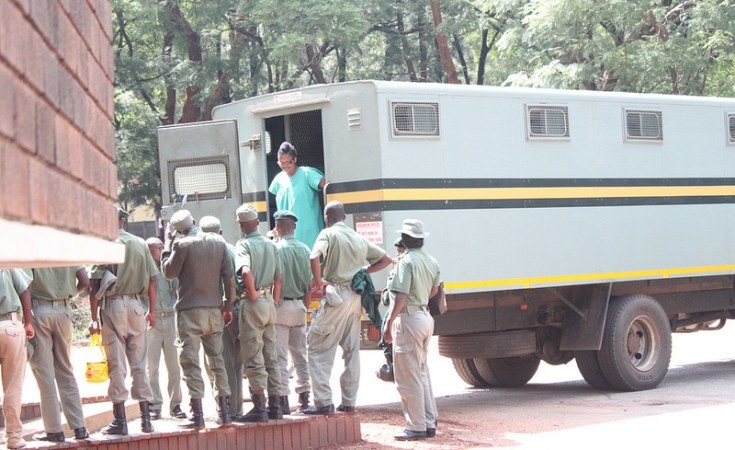 Nyarai Mudimu/IPS
Prominent Zimbabwean human rights lawyer Beatrice Mtetwa was arrested for allegedly obstructing the course of justice. She is pictured here existing a police van as she arrived at the Harare Magistrate's Court (file photo).
The East African (Nairobi)
By Kitsepile Nyathi

The United States has raised the red flag over alleged human rights violations in Zimbabwe, which include torture of government critics by security forces.

In its country report on human rights practices in 2020, the US Department of State's Bureau of Democracy, Human Rights and Labour said Zimbabwean security forces acted with tacit support from President Emmerson Mnangagwa's government.

The report is yet another unflattering assessment of President Mnangagwa's administration by the US in the last three years following a military coup that toppled long time ruler Robert Mugabe.

"Non-governmental organisations reported security forces abducted, assaulted and tortured citizens in custody, including targeted assault on and torture of civil society activists, labour leaders, opposition members and other perceived opponents of the government," the report released on Tuesday says.

The department said that as of November 2020 there were a minimum of five reports of short-term abductions and assaults or torture of government critics by security forces.

A number of activists were allegedly abducted last year ahead of protests against the deteriorating economic situation in the country.

"These instances typically occurred at night, although some happened in broad daylight," the report added.

"The abductors forcibly removed persons from their homes, parking lots and press conferences and assaulted them for hours before abandoning them, usually severely injured and naked, in a remote area."

Some of the prominent victims include opposition MDC Alliance legislator Joana Mamombe, who was allegedly abducted and sexually abused alongside two other activists - Netsai Marova and Cecilia Chimbiri.

Ms Mamombe, Ms Marova and Ms Chimbiri were allegedly removed from police custody, then abducted and tortured by suspected security agents after they were arrested during a protest in Harare on May 13 last year.

"After the three women reported the crimes to police, they were rearrested and charged with making false statements to police and for faking their own abductions."

The Harare administration is also accused of using the cover of Covid-19 lockdowns to clamp down on dissent.

"Impunity was a significant problem in the security forces and the civilian authorities who oversee them, including police, military and intelligence officers," the report added.

"To date, no one has answered for disappearances, civilian deaths, rape, abduction or torture allegations from the 1980s to as recently as November (2020).

"Security forces were firmly under the control of the ruling party and were often directed against the political opposition."

Zimbabwe insists that the sanctions are illegal and unjustified. Several western countries and the European Union also maintain targeted sanctions against Zimbabwe over alleged human rights violations and electoral fraud.

What Biden-Harris Victory Means to Africa's 54 Nations - Experts
Tagged:
Copyright © 2021 The East African. All rights reserved. Distributed by AllAfrica Global Media (allAfrica.com). To contact the copyright holder directly for corrections — or for permission to republish or make other authorized use of this material, click here.