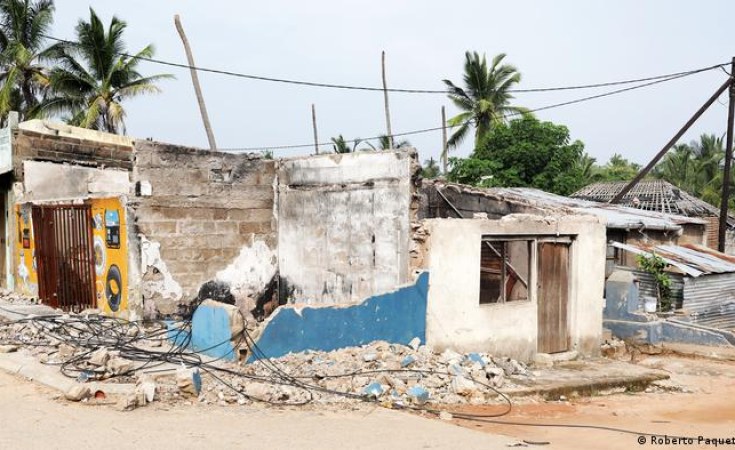 Islamic State (IS) claimed credit for the attack on Palma, but the claim is clearly fake and, indeed, it seems likely that IS was never in contact with the insurgents about Palma.

The IS-aligned AMAQ news agency issued a statement 29 March claiming that IS had attacked Palma, and destroyed government offices and banks - which by then had been in the international media. And it included the photo below. Enlarging the upper left corner of the picture gives the location, Mocimboa da Praia.

Indeed, in attacks over the past year, one of the first things destroyed has been mobile telephone towers and equipment, to prevent communications with the outside, and that happened in Palma. Instead of trying to gain publicity, insurgents seem to be trying to prevent it.

The insurgents did make links with IS in 2019 and sent out films taken on mobile telephones, including some with insurgents flying the black IS flag. But this appears to have ended more than six months ago.

Fighting continues in Palma. As in all of its raids, the insurgents do not initially try to hold towns, but drift away as the military response increases. But there are still insurgents in Palma and still the sound of gunfire. On Tuesday afternoon (30 Mar) the Defence Ministry took a group of journalists to Palma to show the town was in government hands, but instead were forced leave after 30 minutes when the helicopter came under insurgent fire.

Much of the town is empty and abandoned or destroyed. There is still no telecommunications, making it difficult to obtain details.

Fresh troops have been flown in from Maputo and the defence forces have launched an operation to identify everyone in Palma and the reasons for their presence, to try to identify remaining insurgents. But that raises the danger or the army harassing innocent civilians, as has happened in the past.

The UN migration agency IOM reported that at 17h00 on Wednesday 31 March nearly 8,200 displaced people had been identified, with 3,600 in Mueda and 1,200 in Nangade. Many thousands more are in transit or hiding in forests. In a statement Wednesday afternoon, OCHA said "Many more people remain displaced inside of Palma - including thousands who have reportedly gathered near the Afungi complex - where the security situation remains volatile." A second boatload of 1400 Total workers is expected to arrive in Pemba on Thursday.

The 24 March attack was well planned and coordinated. Insurgents robbed three international banks and a WFP warehouse, taking 90 tonnes of food. They seized at least 80 civilian vehicles, including two fuel bowsers, and stole army munitions in the highly-coordinated attack. This should keep the insurgents supplied for he near future. (Intelyse 30 March)

People who fled to Nangage told MediaFax (30 March) that killing was not random, and insurgents targeted civil servants. Similarly, the attack on the Amarula Hotel was not to attack foreigners, but because senior government staff, including the district administrator, had taken refuge there.

Friendly fire: Six people were killed and more wounded when a helicopter of the Mozambican armed forces fired on a lorry transporting soldiers and civilians away from Palma. (@ Verdade)

Three members of the UK’s elite military regiment, the Special Air Service (SAS) went to Cabo Delgado hunting for a British man, Phil Mawer, killed after a convoy from the Amarula hotel came under attack from militants. (The Times, London, 31 Mar)

Dyck Advisory Group (DAG) whose contract with government is ending 6 April has joined with one of the largest private security companies, GardaWorld, according to Africa Intelligence (31 March).

Thousands On the Move After Brutal Attacks in Northern Mozambique, UN Office Reports

Next Story
Tagged:
Copyright © 2021 Mozambique News Reports And Clippings. All rights reserved. Distributed by AllAfrica Global Media (allAfrica.com). To contact the copyright holder directly for corrections — or for permission to republish or make other authorized use of this material, click here.