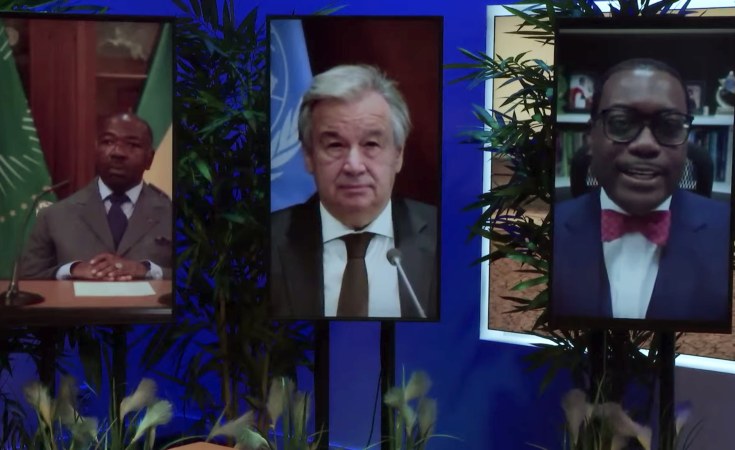 The coronavirus-linked economic slowdown is limiting cash to help Africans pay to adapt to climate extremes, from drought to floods

From heat-resistant crops to insurance that helps nations rebuild after a disaster, efforts to adapt to growing climate risks are taking root in Africa - but the work is too slow and is now threatened by COVID-19, African leaders warned Tuesday.

Just 3% of international climate finance is reaching the continent, Akinwumi Adesina, president of the African Development Bank (AfDB), told an online meeting seeking advice from African heads of state on how to accelerate adaptation.

The bank said earlier this year it would raise $25 billion by 2025 to spur climate action in Africa, with at least half going to back projects to adapt and build resilience to worsening droughts, storms, floods and sea level rise.

But with the coronavirus pandemic hitting economies and development budgets around the world, raising money for climate action has become harder over the last year, even as climate change-related risks surge, African leaders admitted.

"We are soon going to need at least this much ($25 billion) every year if we do not effectively mitigate and reverse climate change," warned Gabon's President Ali Bongo.

"Every day the thunderstorms seem more violent. Flooding is more frequent and droughts are more severe," he said. "Crops are failing. People are being forced to flee their homes (and) becoming climate refugees."

Niger's President Mohamed Bazoum said the economic downturn triggered by COVID-19 had destroyed jobs on a continent already struggling with legions of unemployed youth, "pushing them into the arms of organised crime and terrorists".

But across the continent, varied climate adaptation efforts are already protecting lives and incomes, the leaders said.

In Sudan, Prime Minister Abdalla Hamdok said a switch to heat-tolerant wheat on 800,000 acres, backed by the AfDB, "has made it possible to produce wheat in climates previously considered totally impossible".

Ethiopia has similarly invested in large-scale land restoration and forest re-planting, which has helped shore up water supplies - and countries from Mozambique to Mali are now covered by risk-pooled disaster insurance.

But Senegal's President Macky Sall warned the pandemic was diverting funds from climate change adaptation and threatened to dry up that money in the long term, as debt-laden African countries struggled to right their listing economies.

Much of the continent has seen good economic growth over the last few decades, but with COVID-19 "all efforts have been reduced to nil", Sall told the online event.

"Everything has been put at a standstill," he added, warning that the downturn, bringing job losses and cuts in investment, "will lead to deeper problems in all our countries".

The AfDB and the Global Center on Adaptation hosted Tuesday's meeting as part of their joint Africa Adaptation Acceleration Program, which aims to boost African efforts to adapt agriculture and infrastructure while creating jobs.

The AfDB, for instance, intends to provide weather information and advice to 30 million African farmers via their mobile phones, and to help a million young Africans build skills to create green jobs that advance adaptation.

The program "will build on what is working", Adesina said. The bank has already boosted the share of its finance spent on climate change from 9% in 2016 to an expected 40% this year, with more than half of that going to adaptation work, he noted.

That has included a push to expand a regional insurance initiative to more vulnerable African nations and support for work to plant a "Great Green Wall" of trees across the Sahel to hold back desertification and protect farmers.

But Seychelles President Wavel Ramkalawan said much more needed to be done rapidly, including in island nations like his hit hard by sea level rise and coastal erosion.

"Climate change cannot wait while we address COVID-19," he said.