Namibia: Vilho Falls On His Sword 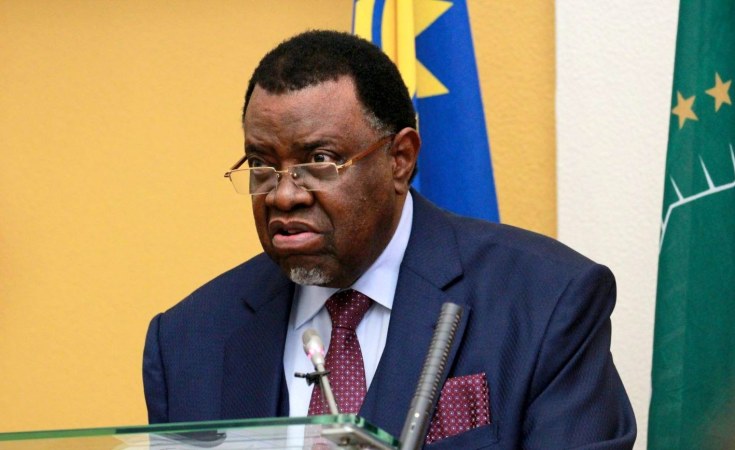 DEFENCE minister Peter Vilho's decision to resign has brought to the fore fresh calls to reform transparency in the military, an industry which has earned a reputation of being a hotbed of corruption.

The minister's other Hong Kong account was linked to a N$1,8 billion arms deal with the Chinese government 12 years ago.

Some expected Vilho (59) to be fired for failing to comply with parliamentary and Cabinet rules that forces lawmakers and executives to declare what they own.

Some say Vilho tried to step on many toes, including that of military generals.

Those sympathetic to Vilho said reforming the ministry was always going to be a tall order for him - especially since he may not have commanded the respect of some of his colleagues.

Geingob accepted Vilho's resignation, State House announced yesterday, saying he resigned because "his continued membership of the executive was untenable" and the "ongoing media blitz" focused on him detracted from the "very important work of government, especially in the area of defence and security".

Vilho thanked Geingob for the honour and opportunity to have served as minister.

Geingob wished Vilho all the best.

Former defence minister Nahas Angula said the ministry was in disarray when he took charge in 2012 and he had to try to stabilise it.

He said he tried to introduce reforms that would see the military understanding its role and civic responsibility.

Angula also introduced synergies between the National Assembly and the Ministry of Defence to ensure that members of parliament understood what they were voting for when the defence budget was tabled.

He did this knowing the parliament would be satisfied that people's funds were not abused.

Efforts to get comment from Vilho were not successful yesterday.

Disgruntled military generals are seen to be some of the people behind the leaks exposing Vilho.

His departure has brought to light the secrecy and dirty deals within the military that had allegedly been going on for years.

The reform of the defence ministry has always been a controversial issue.

Former president Hifikepunye Pohamba suspended former head of the country's defence force, Martin Shalli, in 2009 and forced him to retire in 2011.

Shalli was accused of being paid bribes by a Chinese state-owned weapons company.

A year later, Pohamba had initiated a review of the military. Corruption and nepotism were said to be the main focus of the review, which was eventually handed over to Angula to implement.

Angula yesterday said the content of Tjiriange's report was only seen by Tjiriange himself and by Pohamba.

Institute for Public Policy Research (IPPR) executive director Graham Hopwood last week said there is a need for reform and to introduce measures such as the Executive Members' Ethics Act as has been enforced in South Africa.

This should include the public declaration of interests and assets, verified by an independent body.

"In view of scandals like Fishrot and the claims around this defence deal, it's time for Namibia to introduce a ministerial code of conduct which would build on Article 42, and to make sure that Cabinet members follow the highest standards of integrity or face being sacked or asked to resign," he said.

Hopwood said it appears that Vilho may be in breach of Article 42 (1) of the Constitution "which is the clearest statement we have on the need for Cabinet probity".

Geingob's detractors questioned whether he knew Vilho was subject to pending or past criminal investigations.

It is also queried why no basic background check has been conducted on Vilho.

Revelations linking Vilho to an offshore bank account in Hong Kong brought to the fore a decade-old corruption case, which has haunted the former navy commander for years.

The case involves bank accounts in Hong Kong that were investigated as being part of alleged kickbacks linked to a N$1,8 billion arms tender for the Namibian government around 13 years ago.

Despite strong evidence, Namibian authorities appear to have swept Vilho's involvement in the case under the carpet.

Shalli was forced to retire from his position in 2011 by Pohamba due to the investigation into the kickback allegations at the time.

Vilho has been a senior figure in the defence ministry for years.

He has been a navy commander since 2002.

He is credited for being instrumental in setting up the Namibian navy and was trained at a naval academy in Brazil.

He was then appointed as an executive director of the ministry in 2017. Two years later, he was elevated to head the defence ministry.

During his time as executive director, he oversaw the purchase of farms at prices seen as inflated and in one case the ministry lost N$10 million in a failed attempt to buy a farm in the Okahandja district.

Vilho has had several public spats since last year.

He attacked white businesses, accusing them of being greedy, despite allegedly controlling 70% of Namibia's economy.

Vilho added "we know that their wealth does not stem from business acumen, but from the brutal exploitation of our people on their latifundia [large farms]. It is wealth built on cheap and expendable labour of the contract system."

The former defence boss also faced an onslaught from parliament.

Vilho accused the Office of the Auditor General of attempting to spy on the performance of some of the Namibian Defence Force's military equipment under the guise of accountability and transparency.

Geingob is said to have summoned Vilho, warning him to pick his battles.

Landless People's Movement leader Bernadus Swartbooi accused Vilho of aligning with China and attempting to divert attention from the corruption scandal that has rocked the ruling party.

Swartbooi made these remarks in a letter sent to the minister of defence and veterans affairs on 2 September 2020.

The letter came two weeks after Vilho accused the LPM leader of acting like a puppet of the United States.

In December 2020, Vilho attacked Windhoek mayor Job Amupanda and his father in an opinion piece published in the Confidénte newspaper.

"The sins of the fathers shall be visited again upon the sons," the former minister said.

"Without doubt, kakunyas/makakunyas were sociopaths. I am therefore inclined to believe that the son of the makakunya sociopath is Namibia's dangerous son," Vilho said.

Amupanda nicknamed Vilho 'Abacha', after a Nigerian military general who was known for corruption.

Vilho Challenges Amupanda to Report Him to ACC