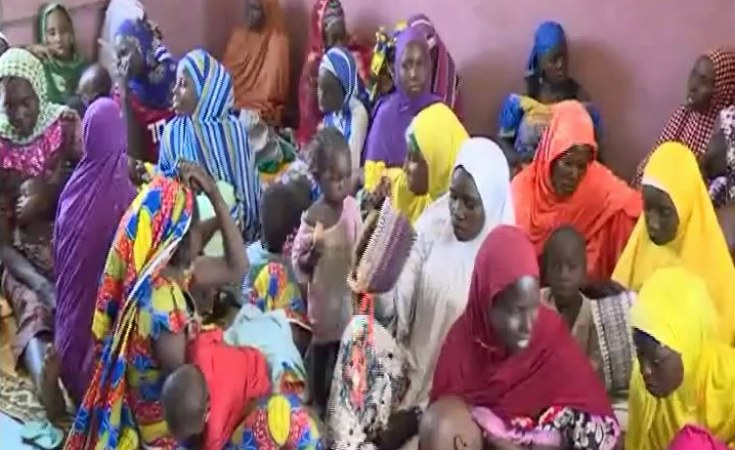 Maroua, Cameroon — About 60 former fighters and civilians rescued from Boko Haram by Nigerian, Chadian and Cameroonian troops have been rushed to a disarmament, demobilization and reintegration center in northern Cameroon. Most of the civilians are women and children, some with fresh scars and amputated body parts, an indication of torture by the terror group.

Thirty-five children, 12 men and 11 women, most of them looking exhausted, rushed for food and water at the disarmament, demobilization and reintegration center in Meri, a Cameroonian town on the border with Nigeria and Chad.

Among them is 29-year-old Momieni Sudarma. Surdarma said she was abducted from the Cameroon border village of Amchide in July 2014 and taken to Nigeria's Borno state. The United Nations says Borno state is an epicenter of the Nigerian terrorist group Boko Haram.

Sudarma said she does not know the fathers of the two children she delivered in the bush in the Nigerian town of Banki. Boko Haram fighters sexually abuse girls and women and refuse to provide water and food for the women and their children, she told VOA. She is grateful to God for saving her life and the lives of her two children, Sadarma said, from the heartless armed men who abducted her and took her to Nigeria.

Cameroon said Thursday the Multinational Joint Task Force, of the Lake Chad Basin Commission freed civilians from the terrorist group. The task force, based in the Chadian capital of N'Djamena, is made up of troops from Benin, Cameroon, Chad, Niger, and Nigeria.

Oumar Bichair, coordinator of the disarmament, demobilization and reintegration center in Meri, said 11 of those sent there are Boko Haram fighters who disarmed and surrendered to the military. He said some of the former fighters and civilians had wounds and amputations, indicating they were tortured in Boko Haram captivity.

He said troops from Cameroon, Chad and Nigeria jointly launched rescue operations along their borders and saved the civilians from Boko Haram atrocities. He said during the rescue operations, some Boko Haram fighters who were disgruntled and wanted to surrender, dropped their weapons. 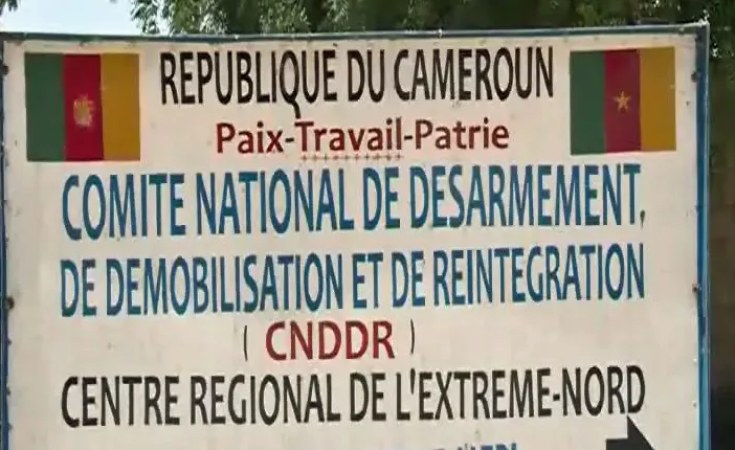 Moki Edwin Kindzeka/VOA
A sign for the CNDDR Center (National Committee for Disarmament, Demobilization and Reintegartion, in Meri, Cameroon, April 9, 2021.

Bichair said some of the rescued mothers said they were sexually assaulted by terrorist fighters. He said most of the 35 rescued children, ranging from 6 months to 9 years, do not know their fathers.

Social workers have been sent by the government of Cameroon to take care of the women and children. Habiba Mamma, of Cameroon's Social Affairs Ministry, said she wants the civilians to, first of all, express their concerns and worries.

She said psycho-social workers must pay special attention to each victim because the rescued women and children have difficult stories to share. She said she listened to stories of victims in distress and there is a need to ensure their psychological well-being before they are reintegrated into society.

Cameroon said it will provide psychological and economic assistance to those rescued before they return to their communities.

In February Cameroon said 5,000 of the 103,000 Nigerians, mostly women and children, who fled across the border from Boko Haram terrorists had agreed to return to Nigeria.

Cameroon said it had agreed with troops from Nigeria and Chad to free civilians still held in captivity by the terror group and make sure Boko Haram's ability to attack is reduced to minimum, for peace to return.

Boko Haram terrorists have been fighting for 11 years with the aim of creating an Islamic caliphate in northeast Nigeria. The fighting has spread to Cameroon, Chad, Niger and Benin.

The United Nations says Boko Haram violence has killed over 30,000 people and displaced about 2 million in Nigeria, Cameroon, Niger and Chad.