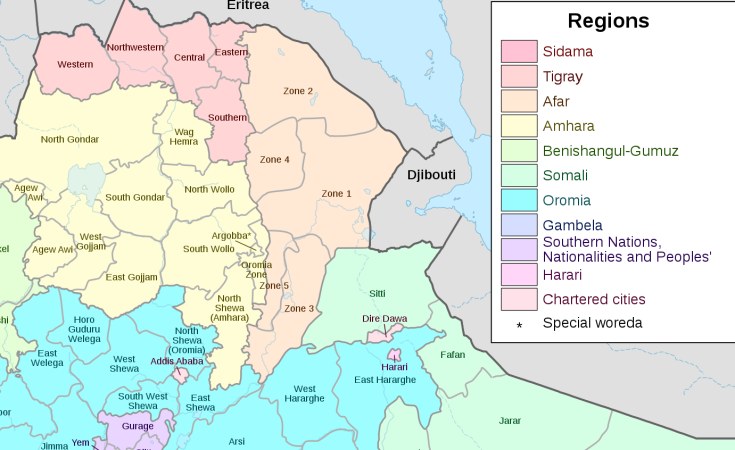 Addis Abeba — Accounts of the magnitude and scale of the violence that wreaked havoc in Oromo Special Zone and North Shewa Zone in the Amhara regional state are surfacing, depicting an image of a violence that inflicted heavy casualties. One such account is presented by the Jile Timuga woreda communication bureau who issued a statement on April 7, 2021 that was addressed to local and international media reporting in Ethiopia requesting immediate media coverage and detailing the scale of the violence, it read, "Jile Timuga woreda has been under attack recently. The attack was so devastating that 65 people have been killed, 114 others injured, 813 houses burned down and 40,000 displaced as a result." The communication bureau also posted a video recording of a burned-down school and photos of a torched health center, both located in Wossen Qorqor kebele; the school which provided Afaan Oromo curriculum was torched during the violence according to witnesses on the recording.

Violence first broke out in Oromo Special and North Shewa Zone on Friday March 19, 2021 after an Imam was killed in front of a Mosque in Ataye town that resulted in escalation despite attempts by elders to resolve the conflict. Eye witnesses Addis Standard spoke to claimed that the fighting was between Amhara residents backed by Amhara Special Forces and Oromo residents of the area. As part of a campaign of contradicting narratives and polarization of the conflict Oromia and Amhara regional state chapters of the ruling Prosperity Party (PP) engaged in a war of words with each accusing its counterpart of fomenting violence in the area.

On April 4, 2021 a graphic video showcasing an attack carried out by a mob on an ambulance, in the attack the assailants dragged injured individuals out of the ambulance, beat and stabbed them to death. Addis Standard was able to locate the location of the attack as being Shewa Robit, North Shewa Zone, Amhara Regional State and was able to get contacts of the victims' families.

Aliye Mohammed, a relative of one of the victims who spoke to Addis Standard on the phone, "One of the deceased is my cousin. It all started in Ataye when fighting first broke out and my brother and I got injured, we were taken to a health center at a nearby town called Senbete but the doctors there treated us badly," he continued, "At one point my cousin passed out so I asked to that we be transferred to a bigger hospital and because my injury was not serious they took my cousin after referring him to a hospital in Shewa Robit town and he was transferred and two of them our distant relatives accompanied them." Aliye was left at Senbete health center but later heard of the incident from survivor who told him, "The injured were carried in two ambulances when we entered the hospital, they were met by a mob of people and soldiers that belonged to the Amhara Special Forces who immediately attacked and assisted attackers who attacked the two ambulances and the injured they were carrying." He continued, "The mob under the watch of Amhara Special Forces used everything within their power on the injured and as a result 12 people died."

Mohammed Ahmed, also a relative of one of the victims, corroborated Aliye accounts and added, "When we heard of the attacks, we wanted to go and collect the bodies of our relatives but the roads are closed due to the continued fighting at the time." Mohammed who lost a brother continued holding back his tears, "Their bodies were left there and we had to beg officials to bring back their bodies so we can give them proper Islamic burials and perform funeral prayers (Janaza). They brought the bodies days after the incident and we buried them." Aliye corroborated Mohammed's accounts about collecting the bodies of the deceased.

Ahmed Aliye, a health care professional who accompanied the motorcade that contained two ambulances and a police car spoke to BBC Afan Oromo service corroborated Aliye and Mohammed accounts of the events but did specify the number of dead and added, "When we arrived at Yifat Hospital, there was only some nurses and no doctors at all so they told us to take them to another hospital as we left the compound the road was blocked and we were prevented from continuing our trip." he continued, "As we stood by discussing the next steps to be taken, Amhara Special Forces came and surrounded us, they pointed their weapons at us and we told them we are men of peace. A town official came and accused us of scaring doctors and as that was happening we started to get surrounded by a huge crowd a man yelled 'these are one and the same with the people who are killing us, kill them' and the attack started. They first shot a man called Ismael who got off the ambulance and started running for safety and the crown started throwing rocks at us and beating us"

Describing how he and others survived the onslaught by the mob, "A man who saw me running with the two drivers and three police officers called us and hid us in a shack and closed the door on us. Later we heard him send the angry mob who followed us 'they went from there' he said when they asked him about our location. We left after the mobs disappeared and we went to the federal police and from there we were brought to safety." Ahmed lost three of his uncles and a cousin in the attack.

The Ethiopian Institution of Ombudsman (EIO) in a statementreleased on its Facebook page discussed conflicts around the country where civilian death has occurred. The statement by EIO acknowledged failure on the part of the Amhara regional government in managing the conflict in Oromo Special and North Shewa Zones of the region, it read, "The situation worsened due to the removal of the security apparatus from the area and failure to arrive to the aid of civilians on time when called upon." The statement also disclosed that according to investigations carried out by the EIO , "303 people were killed, 369 injured, 1,539 houses were torched and based on the information we received from the administrations of the two zones over 50,000 people have been displaced. Provisions of aid is ongoing and is relatively better in North Shewa zone than Oromo Special Zone and yet still the provision in both zones is not satisfactory."

The statement explained that the efforts made by regional government were not effective and recommended that stricter measures should be applied to uphold the rule of law in a timely manner. "81 suspects have been arrested in relation to the violence but they were released shortly after 'orders from above' were received. In similar incidents of violence between 2018-2019, perpetrators were not identified or brought to justice." AS