Egypt Impounds Ever Given Over Suez Compensation Claim 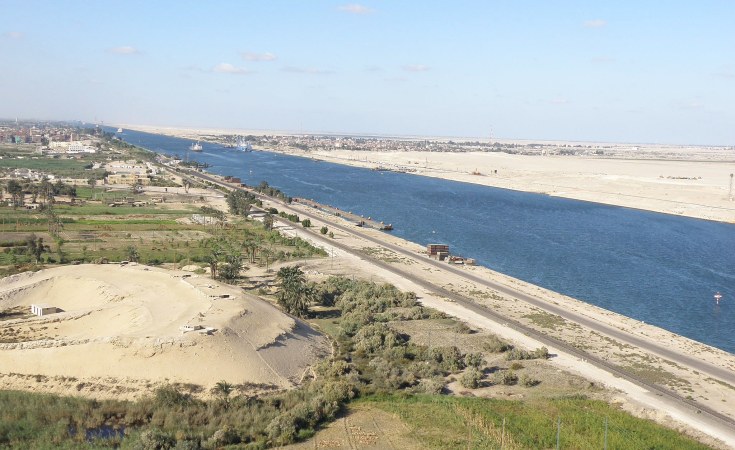 The headline-making cargo ship has been impounded on a lake until its owners cough up at least $900 million in compensation. Egypt incurred heavy financial losses from the canal jam.

The Ever Given megaship, which blocked the Suez Canal for almost a week, is being held until its owners pay for the damages, canal authorities said on Tuesday.

The Empire State Building-sized cargo ship has not been given clearance to leave the lake off of the canal where it was moved to.

"The Ever Given was seized due to its failure to pay $900 million (€754 million)" in compensation, Suez Canal Authority (SCA) chief Osama Rabie told the state-run newspaper Al-Ahram.

The sum was calculated based on "the losses incurred by the grounded vessel as well as the flotation and maintenance costs, according to a court ruling handed down by the Ismailia Economic Court," Rabie said.

Why does Egypt want compensation?

The Suez Canal is a vital moneymaker for Egypt, bringing in slightly over $5.7 billion in the 2019-20 fiscal year.

The canal authority reported that revenue lost during the time that the Ever Given was stuck amounted to $12-$15 million a day.

Egyptian canal personnel and international salvage teams worked for six days to pull the vessel from the bank of the waterway.

An unnamed official from the SCA told the AFP news agency that negotiations on damages were being held between the vessel's Japanese owner, insurance firms and the canal authority itself.

According to the court filing, the Ever Given will be held until the full compensation amount is paid, in accordance with Egyptian Maritime law.

The Japanese-owned, Taiwanese-operated and Panama-flagged vessel ran aground on March 23, blocking the vital Suez route for trade between Europe and Asia.

The maritime data company Lloyd's List estimated that $9.6 billion worth of cargo was held up each day while teams rushed to dig the megaship out of the sandbank.

It took several days for the backlog of some 400 cargo ships, including oil tankers, to pass through the canal after the Ever Given was dislodged.

Along with the judicial order to impound the vessel, prosecutors in Ismailia also opened up a separate investigation into how it ran aground in the first place, a judicial official told AP.

Gold Theft in Zimbabwe - a Huge Problem But Is It Getting Worse?
Infrastructure