Nigeria: Why Ex-Imo Governor, Rochas Okorocha, Is Still in Detention 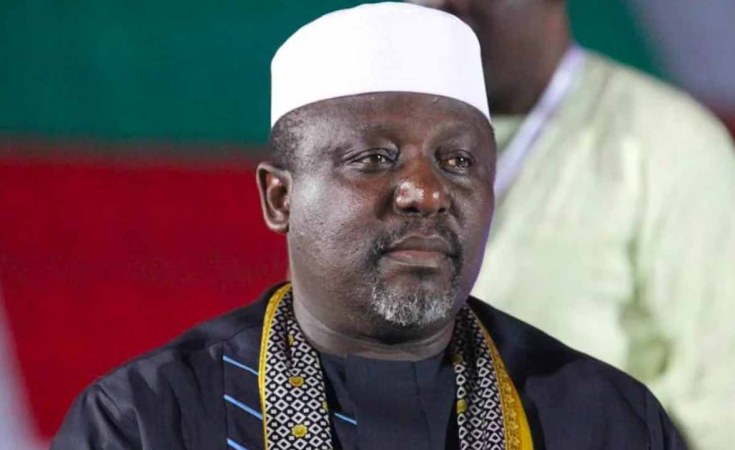 Mr Okorocha, a former governor and serving senator, was arrested by EFCC over multiple corruption allegations on Tuesday.

About 24 hours after his arrest, a former Governor of Imo State, Rochas Okorocha, is still being detained in Abuja by the Economic and Financial Crimes Commission (EFCC), PREMIUM TIMES can report.

This newspaper reported that Mr Okorocha was arrested by the operatives of the anti-corruption agency at about 4 p.m. Tuesday at his Unity House private office in Abuja.

Sources familiar with the matter told this medium that the former governor was arrested after a five-hour standoff with EFCC operatives who trailed him to the location.

Our reporter was reliably informed that the anti-graft agency had repeatedly invited the former governor to its Abuja headquarters in connection with multiple corruption allegations against him.

Mr Okorocha, who is now the senator representing Imo West, reportedly declined to honour the invitation, a development that infuriated detectives who fanned out to get him.

Sources in the anti-corruption agency told our reporter on Wednesday that Mr Okorocha passed the night at the detention facility of the commission in Wuse 2, Abuja.

On why he has not been released, the sources said "operatives have been interrogating him since his arrest since Tuesday."

"The interrogation has continued till this afternoon," one of the sources added, but could not tell when the questioning session would end.

Details of the allegations against the senator are sketchy but our sources said they are related to suspected monumental graft during his eight-year reign as governor.

Since he left office as governor in 2019, Mr Okorocha has been having a running battle with his successor, Governor Hope Uzodinma, who accused him of misgovernance and corruption during his tenure. Both men are members of Nigeria's ruling party, APC.

On February 21, the former governor was arrested by the police for unsealing a hotel owned by his wife but which was shut by the Imo State government. He was later released.

In November 2020, the EFCC's zonal office in Enugu arraigned Lasberry Anyanwu, a former commissioner who served under Mr Okorocha. He was charged with stealing and misappropriation of public funds to the tune of N180 million.

In an interview shortly after PREMIUM TIMES broke the news of Mr Okorocha's arrest on Tuesday, his media aide, Sam Onwuemeodo, told this medium that the senator's arrest was based on an old petition written by the Imo State Government.

"I don't think EFCC has a new matter with Okorocha," Mr Onwuemeodo said.

"Remember that after he left as governor, the (Imo) state government wrote petitions against him, the EFCC came and investigated this matter.

"The matter between Okorocha and EFCC has been pending in various courts, it is not a new matter," he said.

"Unless they must have invited him to come and clarify one or two issues," he added.

In a later statement, Mr Onwuemeodo, who described the arrest as "an invitation," noted that the former governor "is a law-abiding citizen" and would always cooperate with the commission which, according to him, was merely "doing its job."

He also said the senator had been in court with the EFCC over the pending matter.

"The truth is that Okorocha left as the governor of Imo State on May 28, 2019. And shortly after his exit as governor, Imo State Government wrote Petitions upon Petitions against him.

"The EFCC investigated the petitions and has been in various courts of the land with Okorocha, to that effect," he stated.

He said at the end of the day "we would know whether the commission will be withdrawing the cases in courts, or would continue with the cases already in courts."

"But to us, the commission is doing its job and should be given the needed cooperation. And Okorocha being a law-abiding citizen, would always cooperate with the commission over the Matters in Courts. EFCC is not a slaughter house, but a very responsible institution and should be seen as such.

"We have no reason to complain about the invitation of today, which Okorocha honoured as a patriotic and responsible Nigerian.

"Like we stated earlier, the commission didn't invite Okorocha today (Tuesday), for the first time," the senator's spokesperson added.