Kenya: Inside the Kenyan Home of British Supermodel Naomi Campbell 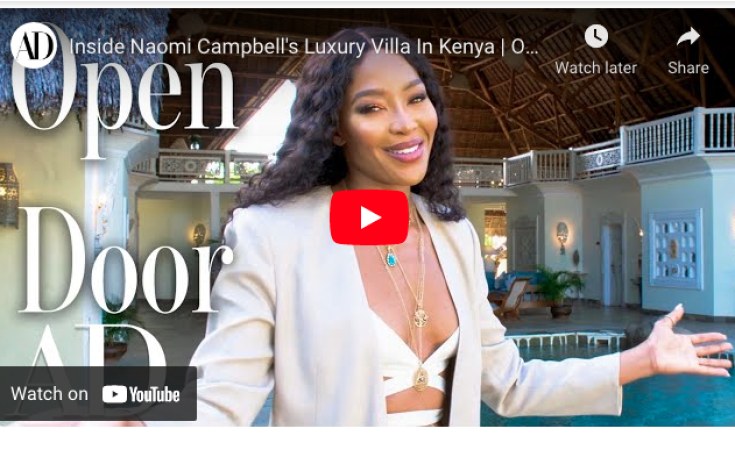 Often referred to as Little Italy, Malindi town by the Indian Ocean is one of Kenya's beautiful seaside towns that is at the center of a strip of idyllic tropical beaches offering a wide range of world class resorts and quiet relaxing hideaways. It is the land of powdery white sand and swaying palms which greet the warm blue waters of the Indian Ocean, and makes it a perfect holiday getaway not only for Kenyans but International tourists and celebrities too among them, British Supermodel Naomi Campbell, who owns a home here. Naomi first came to Malindi in 1994 and has consistently visited the country since then.

She recently gave an exclusive tour of her luxury villa to Architectural Digest, the international design authority, featuring the work of top architects and designers. Overlooking the Indian Ocean, this is her go to home, an epitome of indoor-outdoor living when she needs to unplug from the world. Celebrity homes are always a sight to behold,

The Magical Kenya International Brand ambassador, model and actress who is one of the most successful supermodels of all time, tells the magazine (AD), that the house is largely Makuti roof thatched made from the sun-dried leaves of the coconut palm. This is a common feature at the Coast. For the furniture, "A lot of the wood furniture that we have in the house is made in Malindi," she says. "In fact, we used to have a workshop at the back of the house."

The Kenyan Ministry of Tourism and Wildlife upon giving her the role, mentioned that she will help promote the marketing of Kenya as an ideal tourism and travel destination to the world. The appointment was agreed upon following a meeting between Campbell and Najib Balala, the Cabinet Secretary of the ministry. "Kenya is a natural gem, it has the safari, it has the bush, it has the coast, it has the dunes, it has all the elements and people don't realize that" Naomi says.

This is the second Kenyan home to be featured on Architectural Digest. In 1996, African Heritage House, the most photographed house in Africa, was featured in the prestigious magazine.

Check it out here