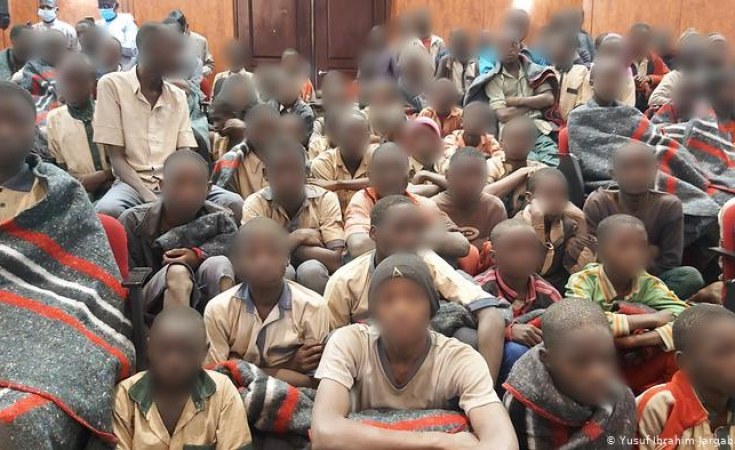 In Nigeria's restive northern region, kidnappings have become all too common, with schoolchildren among the primary targets.

Federal and state governments say they focus on ensuring abductees' safe release and return, but a chorus of health experts and others say support for those abductees shouldn't end there.

Victims need specialized physical and psychological rehabilitation to reintegrate into their communities and to overcome stigma, independent experts working with the U.N. Office of the High Commissioner for Human Rights said in a news release March 3, a day after the release of 279 schoolgirls kidnapped in the northwestern state of Zamfara.

The 10 experts called upon Nigeria's government to make victims' care a priority and, among other things, "to adopt effective preventive measures" against abduction and "to strengthen protection measures for children at risk."

Independent of that group, Dr. Haruna Yakub complains of an "epidemic" of abductions. He is a psychiatrist in Kano, capital of the northern Nigerian state with the same name.

Though Yakub and his colleagues at the federally funded Aminu Kano Teaching Hospital have not dealt directly with victims of mass kidnappings, "we received a lot of people [who] were abducted elsewhere and were brought to us, including children," Yakub told VOA in a recent Skype interview.

"And we have seen a lot of them presenting different degrees of emotional problems, cognitive problems and social problems. And some may include denial of the event, emotional numbness. Some will be mute -- they wouldn't even talk at all," he said.

The ordeal of kidnapping can leave victims "agitated, restless. They have heightened sensitivity to noise," behavioral problems and trouble trusting others, Yakub said. They can lose interest in studies and refuse to go to school. Some "even blame themselves" and wish they were dead.

Yakub said treatment begins with trying to give the patient a sense of safety and control. Once a diagnosis has been made, treatment might include cognitive and behavioral therapy and possibly medication.

"We will teach them how to reintegrate into the society," he said, noting that families also get guidance. "Also, we teach them the psychological aspect of resilience and coping."

But accessing treatment can be a challenge, he said.

Some patients cannot afford medicine or the cost of travel for care. The Nigerian Medical Association reported last year that the country has roughly 350 psychiatrists for a population of over 201 million -- or one specialist for more than 574,000 people.

Yakub said some parents blame themselves for not protecting their children; others blame the government.

Fears of abduction have led more than 600 schools in Nigeria to close, depriving tens of thousands of children of classes, Amnesty International said in a new report Wednesday. The rights group's report was released on the seventh anniversary of the kidnapping of at least 276 schoolgirls from a government school in Chibok, a town in northeastern Borno state. More than 100 of the so-called Chibok girls have not yet been returned.

Both Amnesty International and UNICEF say government has a responsibility to make schools safe.

President Muhammadu Buhari, who has led the country since 2015, has pledged all along to improve security. That includes quelling Boko Haram, the Islamist extremist group responsible for the Chibok kidnappings, and others in its war against formal education and the government.

But kidnappings for ransom have been on the rise.

The possibility of payment has created "a conducive environment for this [kidnapping] to fester," Yetunde A. Odugbesan-Omede, professor of global affairs and politics at Farmingdale State College in New York, told VOA.

Odugbesan-Omede, a native Nigerian who also does research on corruption, said some young people have resorted to kidnapping for money because they can't find legitimate work.

"Some of these abductors, unfortunately, go into these trades out of greed," she said. "Many of them go out of just simple need of survival."

Both state and federal governments allegedly have paid ransoms to secure hostages' release.

Buhari warned against ransom payments in a tweet February 26, saying that "state governments must review their policy of rewarding bandits with money and vehicles."

State Governments must review their policy of rewarding bandits with money and vehicles. Such a policy has the potential to backfire with disastrous consequences. States and Local Governments must also play their part by being proactive in improving security in & around schools.

That same day, armed men kidnapped the 279 female students from a boarding school in Zamfara state's Jangebe village. The schoolgirls were freed by their captors several days later, and authorities denied paying a ransom.

This report originated in VOA's English to Africa Service.

Previous Story
'10,000 Boys and Girls Still Held By Boko Haram'
Next Story
We've Not Given Up On Missing Chibok Girls - Presidency

We've Not Given Up On Missing Chibok Girls - Presidency