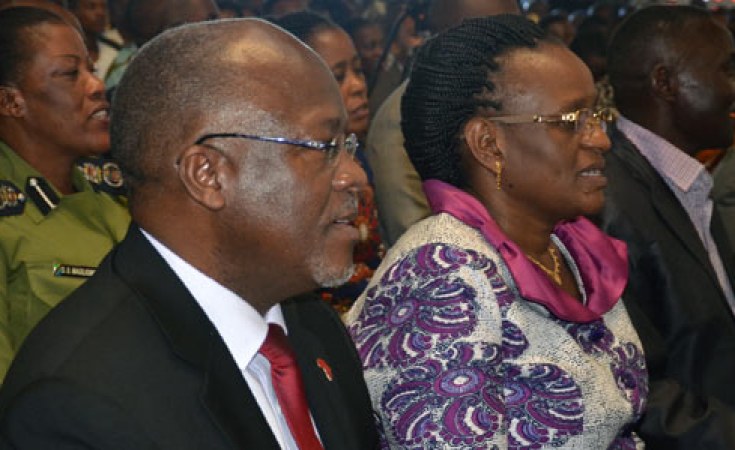 Dodoma — Janet Magufuli the widow of former President John Magufuli is reportedly ill after she suffered a shock after the death of her husband which occurred a month ago.

Speaking on behalf of the family, Dr Magufuli's son Joseph said the former president's widow Janet Magufuli couldn't attend the event because she was sick after sustaining the shock of losing her husband.

"She is going on with treatment. She has asked me to convey her appreciation to Tanzanians for their condolences and cooperation immediately after announcement of Dr Magufuli's death until his burial late last month," said Joseph Magufuli on behalf of the family.

Specifically, he conveyed the family's appreciation to President Samia and her government, clerics and leaders of defence and security forces for the role they played during the death and burial of the former Head of State.

This was the first time that Magufuli's son spoke in public having kept a low profile throughout the years when his father was president .

In another development, The Tanzania Pentecostal Church (TPC) Bishop Peter Konki has on Sunday, April 18, 2021castigated a tendency of some Tanzanians who are seeking favours by praising President Samia Suluhu Hassan and talking ill of former President John Magufuli on social media.

Bishop Konki made the observation in Dodoma during the national congress to remember outstanding leadership of ex-President Magufuli who died at a Dar es Salaam hospital on March 17, this year of heart complications.

The event also aimed to pray for the current President Samia Suluhu Hassan and her Zanzibar counterpart Hussein Ali Mwinyi as they take leadership roles for both sides of the union.

Speaking during the event Bishop Konki said his observation was that some people took to social media messages that praise President Hassan and talking ill comments on ex-President Magufuli.

"They are doing so in order to seek appointment favours for various government positions. This is a very bad hypocrisy that could divide the country and turn back to the mourning time," he said, adding.

He said President Magufuli has died leaving a unified country, warning that Tanzanians shouldn't accept any attempts to divide it based on ideological differences.