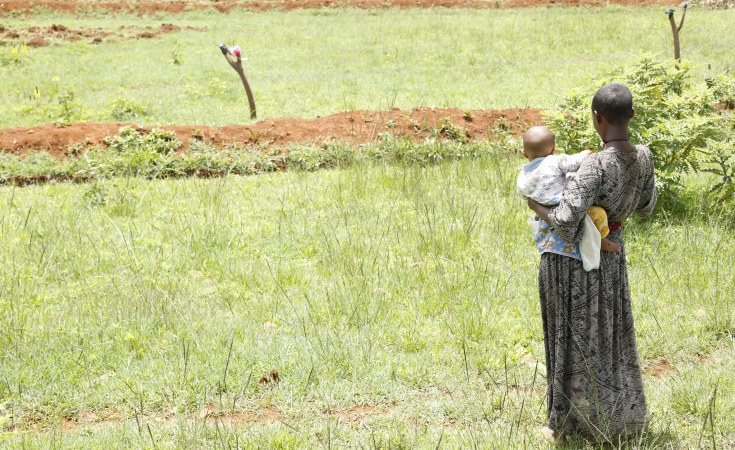 Bintu, (not her real name) was married off to a 49-year-old man in Dogon Daji village, Sokoto State in Northern Nigeria when she was 13. Bintu said she wanted to become a medical doctor before her father decided she would get married to a man thrice her age, who was a farmer. Bintu said her mother was completely against the marriage, having herself been married off at the age of nine.

She got pregnant two months into the marriage, a pregnancy she said came with lots of complications. When it was time to give birth she had a prolonged, obstructed labour, and eventually she lost the baby and developed Vesico Vaginal Fistula (VVF). She was treated successfully and later had three children in the marriage. Her husband later died in a car accident which left her a widow at the age of 22.

The prevalence of early marriage

According to UNICEF, child marriage refers to any formal marriage or informal union between a child under the age of 18 and an adult or another child. While the prevalence of child marriage has decreased worldwide from one in four girls a decade ago to approximately one in five today, the practice remains widespread. The United Nations Sustainable Development Goals call for global action to end this human rights violation by 2030. More than a third of girls in Nigeria end up in child marriages, and with 22 million married before the age of 18, the nation has the highest number of child brides in Africa.

Child marriage affects and violates the fundamental rights of women and girls. It is often the result of entrenched gender inequality, making girls disproportionately affected by the practice. In Nigeria, early marriage is a widespread practice. There is an unfounded belief that when a girl is married off early, she does not have the opportunity to become promiscuous. This places a heavy societal burden on young girls and the reality is different.

It is also believed among Muslims in most parts of northern Nigeria that it is permissible for a man to marry a child as young as 9 years, as long as sexual relations with her is postponed until she has attained puberty. However, it is clearly seen in the Northern parts of Nigeria that child brides are usually forced to have sexual intercourse with their spouses as soon as they are married, and many get pregnant in their first year of marriage. These early pregnancies often lead to Vesico Vaginal Fistula (VVF) or Rector Vaginal Fistula obstetric fistula as these young girls are giving birth at a very tender age when their bodies are not physically able to deliver a fetus. The pregnancy also puts them at a greater risk of sexually transmitted diseases, HIV/AIDS, human papilloma virus (HPV) and domestic violence.

This practice is detrimental to the well-being of the girl-child and is prevalent in several other countries in Africa, as well as Nigeria.

Even though early marriage is prevalent in Nigeria, Northern Nigeria has some of the highest rates of early marriages in the world where 39% of girls are married off before the age of 18 and 16% are married before they turn 15 years old. However, according to Save the Children, the number of Nigerian girls that are married before their 18th birthday is as high as 58.2%. The prevalence of child marriage varies widely across the country, but figures are as high as 76% in the North West region, compared with 10% in the South East.

Islamic law seems to condone child (early) marriage and supports the rights of men over their female counterparts. Islamic scholars assert that there is no age limit fixed by Islam for marriage; children of the youngest age may be married or betrothed even though they insist that a girl should not be allowed to get married until she is ready for marital sexual relations. Perhaps this accounts for the prevalence of the practice of child marriages in Northern Nigeria where young girls between 12 and 14 are withdrawn from primary schools, to get married to husbands who are often significantly older than them.

Dr Abdulfatah Adeyemi, Director for Arts Counseling and Culture, International Centre for Islamic Culture and Education, is of the opinion that in Islam there's absolutely "nothing like child marriage. A child is a child when he has not attained the age of puberty and a marriageable person is a marriageable person when he has attained puberty, mentally, physically and psychologically fit and can make reasonable decisions. Some people mistake betrothal to mean the consummation of marriage and Islam does not give any prescribed age for marriage. Instead it focuses on maturity because the science and civilisation of people differ from one age to another."

Poor families tend to marry off their young daughters to reduce what they see as an economic burden, so they have fewer children that they need to feed, clothe and educate. In some cultures, a major incentive is the price prospective husbands will pay for young brides. Pathfinder International published a report encouraging young girls to adopt the use of backyard gardens as a source of nutrition or to generate income, thereby marriage is not the only option for financial income.

Maryam Uwais, a lawyer based in northern Nigeria who grew up watching girls being married off around her, said, "Child marriage is prevalent in many of the communities where poverty is endemic. Parents, and fathers especially, actually benefit from the dowry and extras that their daughter's suitor contributes to the family of the girl child."

Social pressures within a community can lead families to wed young children. For example, some cultures believe marrying girls before they reach puberty will bring blessings on families. Some societies believe that early marriage will protect young girls from sexual attacks and violence and see it as a way to ensure that their daughter will not become pregnant out of wedlock and bring dishonour to the family.

However, the Federation of Muslim Women's Association of Nigeria (FOMWAN), points out that child marriage is compounding on the problems the North already faces. According to Mrs Saadatu Hashim past Amirah of FOMWAN Kano state, "We go to several local governments sensitizing women and girls about child marriage, and also enroll them in school, build classrooms and participate in advocacy. We should avoid child marriage if we want our society to prosper as child marriage is the main producer of ignorance in our society."

The Impact of Child Marriage on MNCH outcomes

According to the UN, complications from pregnancy and childbirth are the leading cause of death for girls aged 15-19 years in developing countries. Stillbirths and newborn deaths are 50% higher among mothers under 20, compared to women who get pregnant in their 20s.

Maternal and child mortality are some of the implications of early marriage, as a result of the increased likelihood of early pregnancy. A WHO report shows that child marriage and adolescent pregnancy are essentially linked to 90% of adolescent births in the developing world.

When a girl child is married off, the health of her children suffers too. The children of child brides are at a substantially greater risk of illnesses and deaths. Furthermore, stillbirths and newborn deaths are 50% higher in mothers under the age of 20 than in women who give birth when they are in their mid to late 20s or older.

Reducing child marriage will help improve the health of millions of girls and women. In spite of this, few health services are tailored to the particular needs and circumstances of child brides, who are hard to reach and are often unaware that services are in place to support them. It is critical for maternal health and family planning programmes to reach adolescent girls, including married girls, and tailor services to their needs.

Health services can also be an entry point to other services, such as formal and informal education, skills-building and income-generating activities, which can provide married girls with life-changing opportunities.

Ending child marriage requires strategies for girls' empowerment, social and cultural norms change, legal reform, and policy action. The Child Rights Act of 2003, later renamed the Child Right Protection Law, set the national legal minimum age of marriage at 18 years, but it is yet to be effectively domesticated. There are 10 states that have yet to pass the bill and agree on the minimum age of marriage. These states include Yobe, Bauchi, Kano, Sokoto, Adamawa, Borno, Zamfara, Jigawa, Kebbi and Gombe State. There is a need to advocate to these states to domesticate the Act in order to protect Nigeria's children.

In addition to the Child Right Protection Law, Nigeria at the national and sub-national level must fast-track the implementation of the Universal Basic Education Act, with special emphasis on girl education. Programmes at the local level are needed to promote change in attitudes and practices, including programmes that offer life skills, literacy, health information and social support.

To put an end to child marriage, we must focus on providing free universal access to primary education, working with community heads to sensitise their communities on the importance of sending children to school, with an emphasis on the girl child. We must also:

(b) educate girls, ensuring that they are able to stay in school until they reach 18 years

© continue to sensitise parents, religious and community leaders on the need to protect the rights of children

(e) provide opportunities for young girls to acquire skills that would enable them to be economically empowered.

The government should implement a policy that enables girls who become pregnant while at school to continue their education after giving birth. Different and flexible education models would need to be explored that take into account the individual circumstances of the adolescent mothers, including community schooling, bringing the educational opportunities closer to the young girl's homes. Working with legislators to raise the minimum age of marriage to 18 years and providing youth-friendly health services would help to reduce the school dropout rate for girls and enable them to make informed choices about their reproductive health.

Nigeria's future cannot be imagined without healthy, productive, educated girls and women. We must continue to do what we can to protect the girl-child, her dreams and aspirations, and her right to make decisions that empower her to have a brighter future.

Tagged:
Copyright © 2021 Nigeria Health Watch. All rights reserved. Distributed by AllAfrica Global Media (allAfrica.com). To contact the copyright holder directly for corrections — or for permission to republish or make other authorized use of this material, click here.