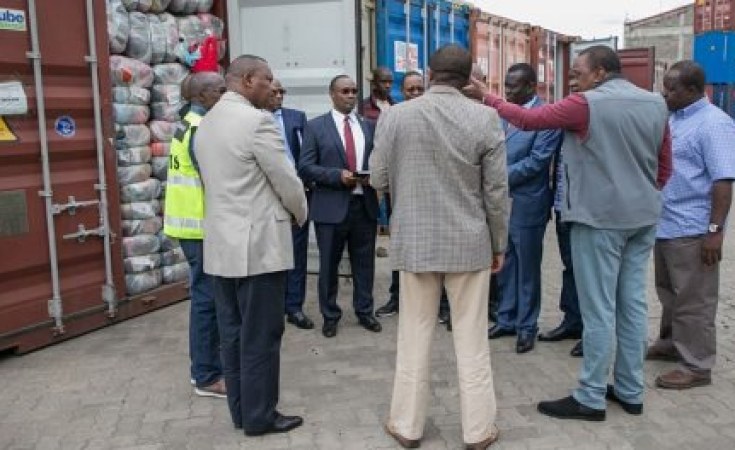 Kenya and Uganda have reached an agreement to resolve the persistent trade dispute between them following a seven-day visit by officials from Nairobi to Kampala.

Led by Cabinet Secretary for Trade and Industry Betty Maina, the Kenyan officials visited Uganda from April 11 to discuss non-tariff barriers (NTBs) affecting trade between the two countries and verify the Ugandan sugar industry to ensure that exports of the product into Kenya are wholly produced in Uganda.

Under the new framework of trade co-operation, Kenya will import up to 90,000 metric tonnes of Ugandan sugar per year and, from July 1, when the new financial year begins, abolish a 35 percent excise duty on liquid petroleum gas cylinders manufactured in Uganda.

"Kenyan authorities would immediately implement the March 2019 Joint Ministerial Commission Decision that allowed Uganda to export to Kenya, duty free, 90,000 metric tonnes of wholly originating sugar annually," according to a joint communique issued after the meetings.

The decision is sweet news for Ugandan sugar exporters who were previously restricted to an export ceiling of 11,000 metric tonnes per year allocated by the Common Market for Eastern and Southern Africa (Comesa) Council of Ministers.

Uganda's 11 sugar mills produce about 510,000 metric tonnes per year. Of this 360,000 tonnes are consumed locally, with the rest earmarked for export in the region.

In response to the concession, Uganda has committed to abolishing 13 percent excise duty on Kenyan-manufactured juices, malted beers and spirits with effect from July 1 and also scrap a 12 percent verification fee on pharmaceuticals manufactured in Kenya.

According to the joint communique, Uganda will also abolish the 18 percent VAT charged on processed poultry meat exported from Kenya and zero-rate drugs manufactured in Kenya with effect from July 1.

The bilateral meeting was held on April 12 at the Ministry of Foreign Affairs in Kampala to discuss and resolve thorny issues impeding bilateral trade relations between the two countries.

Regarding Uganda's denial of preferential market access to Pishori rice grown in Kenya, authorities in Kampala argued that Kenya enjoys a stay of application for rice and tea which, under East African Community trade rules, requires the products to attract the full Common External Tariff when exported to a partner state.

However, Kenya requested for a special consideration from Uganda to allow duty-free market access for the aromatic rice variety.

Regarding Uganda's denial of market access to tissue paper manufactured in Kenya on account of difference in interpretation of the applicable standards, Kenya said it will ensure immediate compliance by the exporting companies.

Regarding Kenya's ban of Uganda's exports of poultry products (chicken and eggs), Kenya's technical team asked for more time to consult for an appropriate course of action.

On the other hand, regarding Kenya's restrictive measures on Uganda's exports maize both countries agreed that any new measures must be communicated formally before enforcement for ease of compliance. Regarding Kenya's continued ban of milk imports from Uganda, the officials from Nairobi were invited to undertake another verification mission within two months after a December 2019 verification exercise proved unsuccessful.