Kenya: Why Are Kenyans Trolling the IMF? 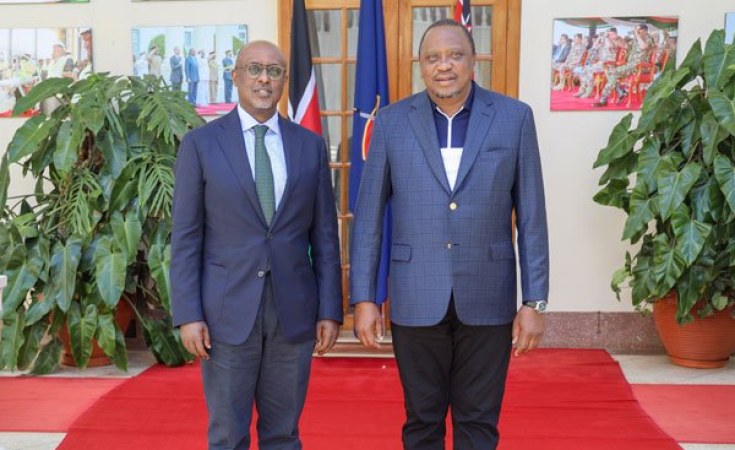 The Presidency/Daily Nation
President Uhuru Kenyatta with Abebe Selassie, the IMF's Director for African Departments, during a meeting at State House in Nairobi on October 28, 2019.
African Arguments
analysis By Ciku Kimeria

Kenya's economy is struggling, but many believe another loan will only benefit corrupt officials and leave ordinary citizens to pay off the debt.

For lack of a better word, Kenyans are currently trolling the International Monetary Fund (IMF). In the past few weeks, the posts on the international financial institution's Facebook page have cumulatively received thousands of comments by Kenyans. A typical one reads: "Take back the US$2.4 billion loan. We don't want it!" Or better yet: "Give it as a personal loan to the President and his cronies as this is how it will be used." A petition demanding the IMF cancel the recently approved loan garnered 200,000 signatures in less than 48 hours.

The financing package in question, agreed in early-April, is meant to support the government's COVID-19 response by providing $2.4 billion in low-cost financing over the next three years. Like many countries, Kenya has struggled with the economic impact of the pandemic. Six months into the crisis, at least 1.7 million Kenyans had lost their jobs. Over a year on, and with another one-month lockdown imposed from 26 March, the situation is ever more worrying. A recent increase in fuel prices has pushed the cost of living up even higher.

The loan is designed to cushion these impacts. According to the IMF, "without this help, Kenya would have to aggressively cut spending on investment and social programs, making it more difficult to achieve a durable and inclusive recovery".

Why the outrage then?

In the past few years, Kenyans have watched as the government taken on billions of dollars in debt. In the past year alone, President Uhuru Kenyatta's administration has borrowed about KSh 1 trillion ($9.2 billion), according to economist Ken Gichinga. Many ordinary citizens claim that this debt does little to improve their living conditions. Moreover, Gichinga suggests, more and more people are getting wise to the effects of these loans.

"Over the past five years, I have noticed that the average Kenyan has a real understanding of debt cycles," he told African Arguments. "Mama mbogas [informal fruit and vegetable vendors] will tell you that the cost of living and taxes are rising because of all the loans the government has taken."

This perception has some truth to it. Debts must be repaid, and the IMF has emphasised that Kenya must reduce its fiscal deficit, including by raising taxes. Many people are worried about what this loan will mean for the economy and their livelihoods when it has to be paid back. Some have living memories of the widespread privatisation and job losses that accompanied the IMF's structural adjustment policies in the 1990s.

Added to all this is also the belief that Kenya won't see any benefits from the loan to begin with because of corruption. As some have pleaded: "Please do not lend anything to our corrupt government. We will not benefit in any way, but will bear the burden of rising debt."

This January, President Kenyatta said that the country loses KSh2 billion ($18.5 million) to corruption every day. That means that in the five minutes it takes you to read this article, about $64,000 will have been stolen from public coffers.

This is perhaps not surprising given Kenya's wide array of scandals. This roster includes the KSh7.8 billion ($72 million) awarded to companies, some barely months old, to supply Personal Protective Equipment (PPE), much of which never arrived last year. It includes the $2.75 billion Eurobond, launched in 2014, of which $1 billion has allegedly since been stolen. And it includes the construction of the Standard Gauge Railway (SGR) from Nairobi to Mombasa, a project that attracted a $3.2 billion loan from China yet continues to make huge losses.

This, Kenyans fear, is what awaits them if Kenya takes on another loan even as the IMF says the country is at risk of debt distress. People recognise that the economy is struggling, but many believe that more debt will simply mean more money disappearing into the private bank accounts of officials, shortly after which the government will raise taxes and squeeze the ordinary Kenyan mwananchi to pay it back.

As the academic Wandia Njoya has written: "That is what IMF loans are. Those guys have printed dollars and created bank accounts with numbers. Those papers mean nothing. They can't eat papers, wear papers, drive papers, etc. So to convert those papers into tangible things, they go to countries and tell clueless presidents that they will give us colored papers (dollars), but in return we must give them our work and our property. "

It remains to be seen if popular pressure will have any effect. However, there is a precedence for a country cancelling IMF financing. This February, Bolivia returned a $350 million IMF loan that had been approved by an interim government the previous year. Its Central Bank stated: "This loan, in addition to being irregular and onerous due to financial conditions, generated... millions in costs to the Bolivian state."

Ciku Kimeria is a communication consultant at Speak up Africa, a policy and advocacy action tank focusing on various issues including sanitation, malaria, Neglected Tropical Diseases (NTDs) and immunisation among others.