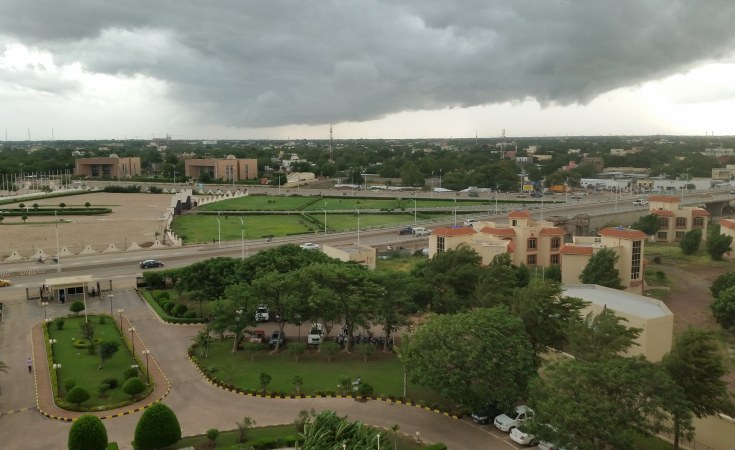 In the wake of Idriss Deby's death on the battlefield Monday, the military has consolidated behind the longtime leader's son. He will assume broad powers but not everyone thinks that's a good thing.

Chad's presidency on Wednesday released a "transition charter" that will repeal the country's constitution and serve as the "basic law of the republic." The military council in temporary control had already announced that President Idriss Deby's son Mahamat Idriss Deby Itno would take over the reins of power in the Central African country after the killing of his father on Monday by rebels, but sought to solidify that position on Wednesday.

The younger Deby, a 37-year-old general, will now head a Military Transitional Council consisting of himself and 14 military leaders who were allies and supporters of his father. He has been named "Supreme Head of the Armed Forces" and will "occupy the functions of the president of the republic," as well as assuming the leadership of the councils of ministers and of defense.

Mahamat Idriss Debby Itno himself signed a decree on Tuesday tasking the military council with heading an 18-month transition toward "free and democratic elections."

The move, which followed the controversial re-election of the elder Deby to a sixth presidential term on Sunday and his killing just hours later on Monday, have raised concerns that the country, and ultimately the entire region, could fall into a state of violent chaos.

"The potentially explosive consequences of President Deby's death cannot be underestimated -- both for the future of Chad and across the region," the non-governmental organization (NGO) Human Rights Watch (HRW) said in a statement.

France, the former colonial ruler of what is today Chad, is also keenly watching developments, with Defense Minister Florence Parly saying, "What's central to us now is that a process of democratic transition can be implemented and the stability of Chad preserved."

Chad has played a pivotal role in the West's war on Islamic terror in the Sahel region and has been praised by France for its steadfast allegiance in battling groups such as Boko Haram, al-Qaida and Islamic State in the Sahel.

Still, as HRW said in a statement, "For years, international players have propped up Deby's government for its support for counterterrorism operations ... while largely turning a blind eye to his legacy of repression and violations of social and economic rights at home."

As if to highlight the uncertainty in Chad, the US State Department on Wednesday issued a statement merely saying it was monitoring the situation closely and that it would be "concerned" by "anything that would stand in the way of a democratic transition of power in Chad."

'Chad is not a monarchy'

The most immediate threat to Chad's "stability" would appear to be presented by the rebel group FACT (Front for Change and Concord in Chad), which claimed responsibility for the injuries that killed Deby. The group, which was formed by dissident military officers in 2016 and is not linked to jihadist groups, has now vowed to depose the younger Deby, saying: "Chad is not a monarchy. There can be no dynastic devolution of power in our country."

The group, which had been based in southern Libya until flooding into Chad on April 11 -- election day -- has claimed that it is "heading toward N'djamena this very moment," though it is unclear just how close the group is to the country's 1-million-resident capital.

A spokesman for the group said: "We took up arms because there was no democratic space in Chad. A peaceful solution was not imaginable. We saw that Deby didn't want to quit power. We don't want to seize power to hold power. Our objective is for democratic transitions to be a reality."

In response, the Military Transitional Council said its fight with the rebels was far from over, "the security situation remains highly serious given the persistence and magnitude of the terrorist threat." A spokesman for the council said the military would fight to "prevent the country from sinking into chaos and anarchy."

Coup, or no coup?

The circumstances surrounding President Deby's death remain unclear, with some arguing it had been a coup rather than a rebel attack that ended his life. Those circumstances may never be resolved, still Chad expert Seidick Abba tells DW that what has happened since is unmistakable: "There is a constitutional mechanism for such instances [the transition of power after the death of a president] and it should have worked. The fact that the army decided to seize power and name Deby's son his successor is definitely a coup!"

Abba says that after 30 years of increasingly autocratic rule under Deby, who himself came to power in a 1990 coup, Chad has the chance to make a fresh start: "The way I see it, Chad has the opportunity to begin a new chapter after the end of the Deby years."

Some in the military agree. On Wednesday, General Idriss Abderamane Dicko, speaking for like-minded military officers, called on the army to disband the Military Transition Council: "We are many. We represent the national and republican armies [though not the presidential guard]. We have decided to support the will of the people and ask that you [the Military Transition Council] heed the wishes of the people and put the nation's sovereignty back in their hands. The role of the army is to support the people of Chad."

Opposition politicians, many of whom boycotted the election and complained of repression during campaigning before the vote, also called for a return to civilian rule.

Masra said a strong military was necessary but emphasized that it had "so much to do in order to guarantee the country's security but also in the fight against terror. Its place is in the barracks, and it must remain entirely neutral."

Fear spreads across the capital as rebels approach

Cameron Hudson, a senior fellow at the Africa Center of the US think tank Atlantic Council, said: "There is a great deal of uncertainty around how events in Chad will unfold. Whether the army will stay loyal to Deby's son and continue the effort to repel the rebels."

Hudson says that after 30 years of Deby's rule, Chadians are fed up and may well demand different leadership but warns this, too, "presents a high risk of civilian casualties and a likelihood that fleeing civilians or soldiers could export Chad's instability to neighboring states." Libya on Wednesday ordered increased surveillance of its borders with Chad.

That uncertainty has become palpable in the capital, with residents fleeing to escape potential conflict or stocking up on food and supplies as reports of approaching rebels swirl and an eerie quiet blankets the city.

"I went to the market to stock up on food for home. We have no idea what the coming days will bring. We have been told the rebels are coming and that they aren't far away. I'm really terrified," as Helene Madi told DW.