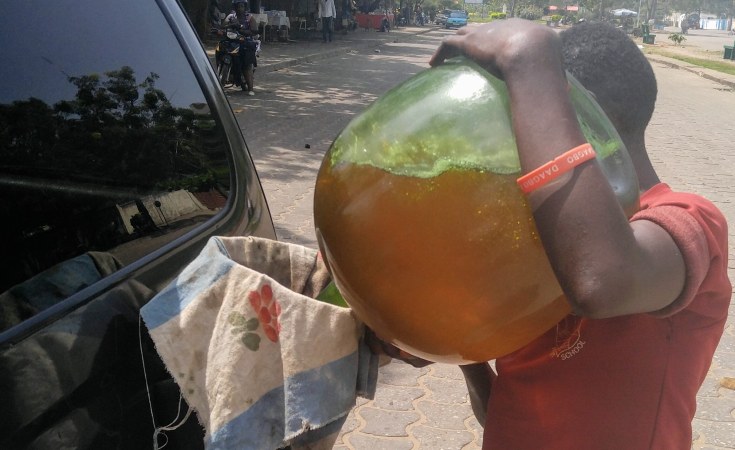 The illegal industry is a major source of jobs, making structural solutions as necessary as law enforcement.

The illicit fuel trade in Benin has soared since 1980, when the country faced a socio-economic and political crisis that saw unprecedented levels of unemployment, with few opportunities for the youth. The situation isn't much better today.

Added to poverty and underdevelopment in the formal sector, Benin has few official petrol stations to meet citizens' needs. In 2016, the country of approximately 11 million people had only 350 petrol stations, most of which were in urban centres.

The illicit fuel trade covers 80% of the national demand. Smugglers buy fuel in Nigeria and traffic it into Benin on motorbikes using unofficial roads. Benin shares a 780 km border with Nigeria, West Africa's leading oil producer and a country where government subsidies make fuel cheaper and accessible to illegal traders.

In Nigeria, oil bunkering - stealing oil and selling it on the black market - contributes to the illicit fuel trade, as Beninese dealers buy it on the black market. Even closing the border between the two countries between 2019 and 2021 didn't affect the networks. Many unofficial and poorly monitored entry points from Nigeria to Benin remained active.

Benin's government has undertaken some initiatives with varying degrees of success

Benin's government has undertaken some initiatives with varying degrees of success. A new law passed in 2018 banned the illicit fuel trade and related activities, including sales outside the official trading and distribution network. Those who transgress could face confiscation of the product and a hefty fine.

In criminalising the trade, the 2018 law reiterated and reinforced existing legal frameworks in place since the early 1990s. Police have made some arrests since the new legislation was passed, but not many.

Security forces were instructed to stop traders from displaying and selling fuel on public and secondary roads. And in 2013, the government pledged CFA 50 billion (US$10 million) to help reintegrate traffickers into the formal sector. But the initiative wasn't supported by the government and its partners during the 2016 elections, and in the absence of funding, it collapsed.

Since 2017, private groups such as Jehovah Nissi Petroleum, Oryx Energies and Benin Petrol have helped establish and expand official petrol stations in major cities. These entities are trying to fill the gap in the official distribution network.

This change could encourage citizens to rely less on the illicit fuel trade, they said. Most however, believed the illegal trade still held a substantial part of the market and didn't feel their activities were threatened.

The legislation and deployment of security forces since 2018 have provided only short-term relief. Illicit fuel traders were removed from public roads, but the operation lasted less than a year, and some returned.

The government measures have also caused violent reactions from traders, and traffickers have adapted by changing their routes and methods. Many dealers no longer operate on main and public roads and instead use rural or border areas to continue to service urban dwellers.

Since 2017, violent clashes between security forces and traffickers have forced government officials to backtrack or downplay the problem. They fear more generalised violence and, in the case of politicians, a loss of voter support. Corruption is also a factor, as illicit fuel traders offer bribes to customs officers to secure free passage.

The official registration of the Association of Importers, Transporters and Retailers of Oil Products (AITRPP) adds to the challenge in Benin. This formal body defends the informal and illegal business interests, posing both risks and opportunities for the country.

The AITRPP controls the national distribution of illicit fuel and has representatives across Benin. Some of its key representatives are seen to be politically connected and wealthy, and as a result, successive governments have struggled to regulate or suppress the sector. But because the AITRPP has influence, it could work with the government to frame long-term solutions.

The illicit fuel trade provides jobs to around 40 000 people - almost as many as the government. It's also estimated to generate 105 billion FCFA (160 million euros) annually, and these gains aren't reported to tax authorities. These are funds that should benefit Benin.

The government needs to look beyond sporadic efforts to address the problem. Sustainable, multi-dimensional responses are needed that deal with structural drivers. Government should implement bold job creation reforms to get those involved in the illegal trade back into the formal economy. A joint public-private partnership could help establish an official distribution network by creating fuel stations countrywide that meet citizens' needs in urban and rural areas.

The government could also work with AITRPP representatives to monitor the sector, especially in Benin's northern regions. The area shares borders with Niger and Burkina Faso - two countries under severe threat by insurgents. In a region where violent extremists need resources such as fuel for their operations, criminal networks will benefit from the distribution of trafficked fuel. This could exacerbate the threat of terrorism in the region.

Benin and Nigeria's governments should look at ways to formalise the cross-border sale of subsidised fuel - the primary source of the illicit fuel trade. Without comprehensive and integrated measures, fuel trafficking will continue to undermine Benin's economic prospects and threaten national security.

This article was produced with support from the UK Conflict, Stability and Security Fund, and the Hanns Seidel Foundation.