Nigeria: One in Five Nigerian State Governors Attended This University 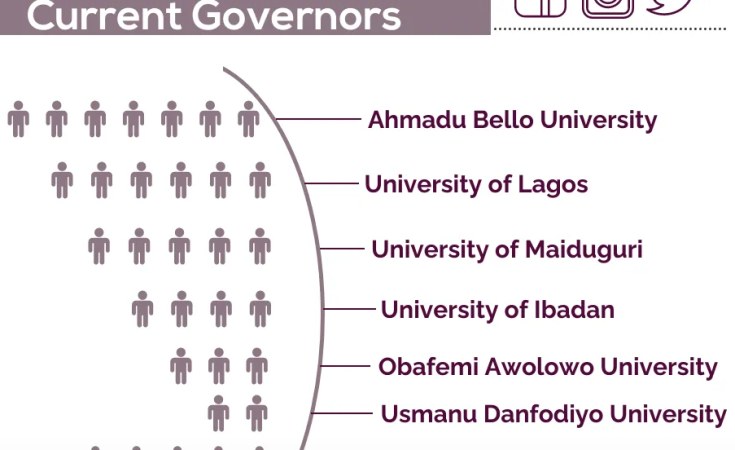 Premium Times
Half of the 36 state governors obtained their first degrees at one of three universities in the country.
Premium Times (Abuja)
analysis By Kabir Yusuf

Half of the 36 state governors obtained their first degrees at one of three universities in the country.

An extensive review of their official resumes also shows that half of the 36 state governors obtained their first degrees from three universities in the country while only two of the governors got theirs abroad.

Seven of the governors got their first degrees or a master's from ABU, named after the only premier of the defunct Northern Region whose administration established the university in the First Republic.

Mr Bello, who started his tertiary education at Kaduna State Polytechnic, obtained a Master's in Business Administration from ABU in 2002.

The 58 year-old institution, formerly named the University of Northern Nigeria, covers a land area of 7,000 hectares and encompasses 106 departments, making it one of the largest universities in sub-Saharan Africa.

The University of Lagos (UNILAG), which calls itself Nigeria's "first choice university," is the second most attended university among the governors.

Six of the serving governors obtained their first degrees from UNILAG. Two of the state executives returned for their master's degree in the university.

The University of Maiduguri produced five of the current state governors who at least obtained a bachelor's degree from the university.

While the governor of Borno State, Babagana Zulum, enrolled in the school for postgraduate studies, four of his counterparts had their first degrees at the university.

Abia State Governor Chikezie Ikpeazu and Ahmadu Fintiri of Adamawa State had their bachelor's and master's degrees from UNIMAID.

Closely following the three is the University of Ibadan which has four alumni among the governors.

After taking first and second degrees in Nigeria, Mr El-Rufai received a bachelor of law degree from the University of London in 2008. He later bagged a master's degree in public administration from the John F. Kennedy School of Government of Harvard University. The governor of Lagos state also earned a similar degree from the same university.

Mr Fayemi completed his bachelor's and master's degree in Nigeria before undergoing a doctorate programme in War Studies from King's College, London, specialising in civil-military relations.

Mr Buni and his Benue State counterpart, Samuel Ortom, had master's degrees in Leeds Beckett University and Commonwealth University Belize in the United Kingdom, in that order.

Mr Zulum, a professor, began his academic sojourn at Ramat Polytechnic in Borno State and later attended the University of Ibadan where he obtained a master's degree in agricultural engineering.

The governor of Katsina State, Aminu Masari, attended the Administrative Staff College of Nigeria, Badagry, in Lagos while the governor of Nasarawa State, Abdullahi Sule, had his first degree from the Plateau State Polytechnic and later proceeded to Indiana State University, Terre Haute, Indiana, USA.

Meanwhile, Zamfara State governor, Bello Matawalle, got his first qualification at Yaba College of Technology before he proceeded to Thames Valley University in the UK for a second degree.

Despite training many members of the Nigerian political class, public institutions in the country still have multifaceted problems, with arguably the most serious being poor funding. The gross under funding could be linked to undue reliance on the government for funds which has resulted in inadequacy of infrastructure and facilities for teaching and research.

The global body proposed that 15 per cent to 20 per cent of annual budgets be earmarked for education to enable nations cater for their rising education demands.

Some of the alternative strategies for improving Internally Generated Revenue (IGR) of universities in Nigeria include: establishment of entrepreneurship training centres in the universities, alumni contributions, partnership programmes and collaboration with other institutions.