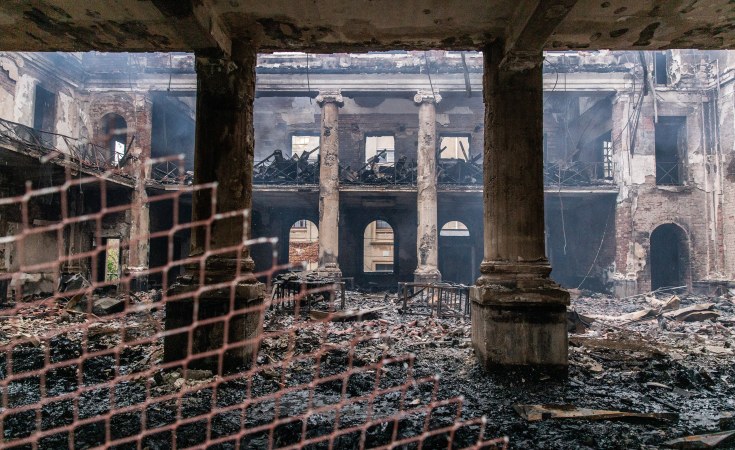 Johannesburg — Through digitising and worldwide donations, the University of Cape Town plans to preserve African history lost to fire

Cape Town is reeling after one of its worst fires in recent history tore through the University of Cape Town campus, forcing 4,000 students to evacuate as it consumed precious items from the library's rare African Studies collection.

Tens of thousands of books, manuscripts, films and government publications from across Africa were on Sunday turned to ash in the Jagger Library; many more emerged water damaged.

The library housed one of the world's biggest collections of African history books and unique African films, including early editions of the first Black-owned newspaper in South Africa.

Ujala Satgoor, executive director of libraries at the University of Cape Town, told the Thomson Reuters Foundation what the loss means for African Studies, and how they can recover:

What is the reality on the ground now the fire is out?

I am looking at a massive crane that is going to lift off what is left of the library roof so that debris can be cleared.

There has been a groundswell of support, from conservators to volunteers, trying to see what we can salvage from the basement where there is water damage from fighting the fire.

We have set up a triage centre to assess the extent of the water damage as any damp is dangerous for vulnerable and fragile materials.

Libraries and academics from around the world have reached out already, saying they want to help us rebuild our collection as best as possible.

What are some of the biggest losses?

The major loss for me is a single collection of 80,000 African Studies monographs looking at a range of subjects from an African perspective such as politics, gender, law, economics, history, HIV research and more.

This was a one of its kind collection on the African continent.

We also lost 3,500 African films that spanned the entire continent, from Egypt to South Africa, filmed by Africans in different languages from the 1950s onwards.

But we can't just quantify this in numbers, there is also the loss of the human effort that went into building these collections over decades.

What does this mean for African Studies as a whole?

It is a huge loss, there are gaps that may never be filled again, like first editions published before 1925 that may be out of publication.

Students are calling for curriculums to be decolonised, and our collections were an essential part of this.

Our responsibility was to be unbiased and uncensored as a library. We did not sanitise history by only collecting certain perspectives.

We allowed contemporary students to peek into the past, apply lessons to the present and understand what this means for the future.

People on Twitter compared this to the fire at Notre Dame. What do you think - and how did the world respond to each loss?

They are different contexts with different sentiments and meaning to people.

The global support to rebuild Notre Dame is happening here too, maybe not on the same scale, but we have been contacted by academics and foundations from across the world offering expertise and funding for the preservation and reconstruction.

The messages of global support have been heartwarming.

The loss of this library, which symbolises the loss of knowledge, really shocked the world and how we manage the reconstruction is so important.

What is the plan for recreating this unique collection?

The university has pledged to assist in rebuilding the collection as best as we can.

What was amazing to me was that librarians created a Google Doc requesting people to upload copies of materials they had used in the Jagger Library to create a digital repository and people have been uploading from around the world.

We had started the digitisation process before the fire but it is hard to quantify how far we got right now. We may be able to rebuild in different formats like e-books but finding those unique, original items will be a challenge.

While we may move into a digital space we still need to concomitantly consider the original. What if there is an internet shutdown? This is why we need to preserve originals.

We will be using all of our networks to actively rebuild our collections as much as we can.

What improvements can be made in the rebuild?

When we consider debate around decolonising the academy, we were actively going that route, bringing in African voices as part of the curriculum.

Our intention it to continue this legacy and not apply a narrow focus, a status quo based on what the library was, but to think about how we build an even broader scope for the future.

We have the opportunity now to look at all aspects of decolonisation, such as architecture, as we think about how we can incorporate African design.

Librarians are intrepid and we will figure it out. We need to see this as a new opportunity.