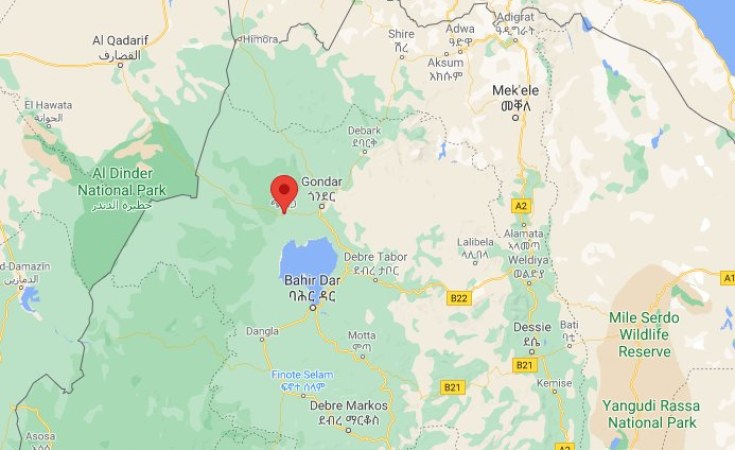 The violence which picked intensity last week and continued intermittently as of the publishing of this news flared up after "armed groups and security forces" clashed in Chilga Wereda of central Gondar zone, according to the peace and security bureau head of the Amhara regional state, Sisay Damte.

Addis Standard received testimonies from three members of the Kimant community who were following the situation closely. Melaku and Getahun (names changed for security reasons) recount the sequence of events that lead to the recent conflict and insist it was reminiscent of a previous clashes as was reported by Amnesty International; both blame the Amhara Regional state Special forces and Fano for being behind the latest bout of conflict.

Getahun recalled a support rally for Kimant Democratc Party days after the Prosperity Party chapter of the region held a rally of its own in Aykel town. Following the rally, Zonal administration of Central Gondar Zone convened a meeting with regional government officials in the town and delivered messages about taking measures on 'anti peace forces'. The zonal administrator also accused the Kimant Democratic Party of having affiliations with Tigray People Liberation Front (TPLF) and Oromo Liberation Army (OLA), which was met by dissent from the attendees of the meeting.

Zonal officials fled the scene after confrontations grew; regional special forces and federal security forces soon embarked on an operation to arrest people. "Gunshots ensued around St. Michael church resulting in casualties to both the government forces and Kimant militias. Six civilians who were crossing the road were wounded." Getahun said, adding, "the barrage continued on Wednesday April 14 in Kuwasmeda, Geta Feres and Tiwudiba neighborhoods. In the afternoon, Mortars were fired from the direction of a military camp of the Ethiopian National Defense Forces (ENDF) located near Seraba town."

Melaku, the second source, corroborated the statement saying "the town was bombarded with Mortars on Wednesday April 14, 2021 claiming the lives of three civilians who are all members of one family." Getahun said "The mortars were found in Kuwas meda neighborhood where houses were destroyed."

At the outset of the conflict, both electricity and water supplies were cut off in the town of Aykel, according to Melaku. In addition to that cellular networks were also cut off as of April 14 although relative calm was restored to the areas in the following days.

"The town was still tense, roads to Gondar were closed and the ENDF was encamped." Melaku explained "The Kimant community, fearful of more deployment of Amhara Special Forces began blocking roads but the Special Forces and Fano passed through the neighboring in Belgi woreda and went on looting and burning in Serte and Wartaye Kebeles" Melaku claims, adding "The community fled to Bezaho and Tembera kebeles with its cattle."

Among the burned down properties is a gas station in Aykel town, according to Melaku, who described the active conflict in Aykel town when the Kimant community retaliated against the attacks by the Amhara Special forces and Fano. Eshetu, another witness whose name is changed for security reasons, corroborated the statement explaining the crackdown on the Kimant community using law enforcement against TPLF and OLA as a pretext. "They say they are after TPLF and OLA rebels but the town is burned down, the residents are being killed and the remaining are fleeing their homes." he said, pleading, "Please be voice for the voiceless."

Although Addis Standard couldn't verify the figures, Getahun explained that 32 people were killed, 38 were injured, 25 houses were burnt causing property destruction including livestock. "Women and Children fled to Bulargi, Ankoba and Serargo Kebeles. But we don't know their status after the communication blackout," Melaku said.

On April 19, the head of the Peace and Security bureau of the Amhara region said that additional Amhara Special Forces were deployed to the central Gondar Zone and that blocked roads were reopened. By the end of the week the ministry of defense stated that federal and regional security forces were working alongside the community and local elders to peacefully resolve the security crisis between the Kemant and Amhara communities who have lived together for centuries.

Melaku added an earlier point of contention between the Kimant community and the Amhara regional state. "A couple of days before the clashes, armed Amhara rebels operating in the neighboring Woreda, Negade Bahir, were pardoned by the Amhara Regional State but similar demand for pardon by Kimant rebels escalated into a full blown conflict." According to the him, both the Amhara and Kimant armed rebels were outlawed by the command post that was established in the area in 2019. "When the Amhara Regional State pardoned and integrated the Amhara armed rebels into their communities, the Kimant rebels demanded to be pardoned too." Melaku added that "the regional government not only denied pardon to Kimant armed rebels but also responded by attacking the Kimant community with the help of Amhara Special forces, federal military and Fano."

Confirming the presence of the conflict, Amhara Prosperity Party released a statement yesterday regarding the demonstrations held in different cities of the Amhara region. The statement also described the violence in Central Gonder Zone as 'ethnically targeted' similar to recent clashes in North Shewa Zone and Oromo Zone. The Amhara PP also expressed its gratitude to regional and federal security forces for containing the clashes. "We would like to assure our people that we are committed to bringing to justice the perpetrators of the deaths and displacements of the people of Amhara," the statement read, "Our party is ready to save this country and its people from this disaster by working together with the people of Amhara and other political forces."

The conflict in the area involving the minority Kimant community and the regional government is not new. A referendum to determine the administrative jurisdiction of the Qimant people was held in eight Kebeles in September 2017. Seven of the eight Kebeles have voted to remain in the administrative jurisdiction of the Amhara Regional State, whereas Quaber Lomye Kebele voted to join the Kemant self-administrative zone, which was established two year prior to the referendum. The result of the September referendum was approved by the House of Federation in October 2017. Since then however, clashes have frequently visited the two communities. Activists blame "Kimant identity group", which refused to accept the results of the referendum, for the clashes.

In its report published in May 2020, Amnesty International detailed the atrocities committed against the Qimant community. The report covered the violence that took place mainly in 2019. Amnesty International listed the regional special police, local administration militia and two Amhara youth vigilante groups who joined forces to attack members leaving at least 100 people dead and hundreds displaced. The attacks on the Qimant community came in the form of grenade attacks, shootings and setting homes on fire. The report read "Flyers and leaflets telling kimant civil servants to leave the area had been circulating since September 2018, but the authorities took no action," Amnesty said. The regional governemnt denied the report as "false."

Since then, there had been efforts by the Amhara regional state under the presidency of the late Ambachew Mekonnen (PhD) and the MInistry of Peace to resolve the issue through dialogue. Addis Standard's repeated attempt to contact the head of peace and security bureau, the commander of Amhara Special Forces as well as the head of Amhara communication Bureau were all to no avail. AS