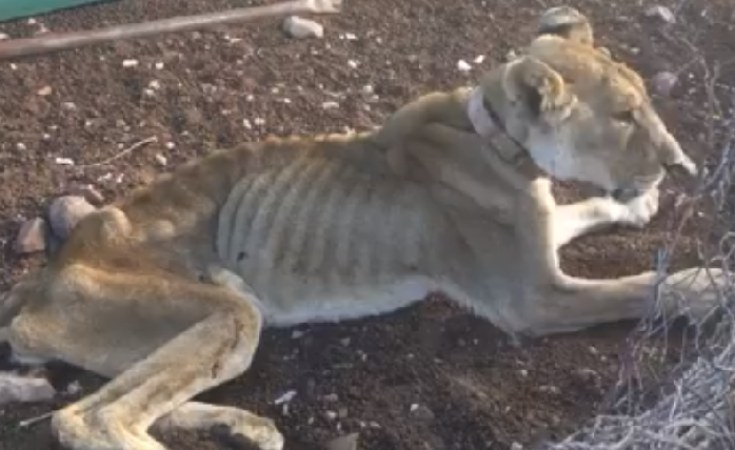 The desert-adapted lions in Namibia's north-west are facing an existential threat from the famine in the region.

A tragic reminder of these unique animals' struggle surfaced on social media yesterday in which an emaciated lioness, too weak to get up, was discovered next to a goat kraal on a communal farm.

A band around her neck revealed that she had been collared, and according to desert-lion expert, Philip Stander of Desert Lion Conservation, she was identified as 11-year-old 'XPL120'.

"She must have walked an incredible distance just to find food. She was not seen often as she lived in the mountains south of Sesfontein," Stander told The Namibian yesterday, adding that environment ministry officials were summoned to "put her out of her misery humanely".

He said the ministry was investigating the incident, but speculated that the lioness was too weak to enter the kraal where she was discovered.

"She was next to the kraal out of pure desperation, but weak and mentally disoriented due to the adverse conditions she had to endure," he said.

Stander said that scenes of emaciated lions are currently a tendency in Namibia's north-west where famine has prevailed in recent years.

He explained that below average rainfall during recent years, as well as unmanaged grazing by cattle of communal farmers, have resulted in hyper-arid conditions in the region, which has had severe impact on the local communities, livestock farmers and wildlife.

Because there was no food left for wildlife, predators struggled to find sufficient prey and many individuals, such as 'XPL120' have moved excessive distances in search of food - some moving towards human settlements that resulted in numerous incidents of human-lion conflict.

According to him, key lionesses have deteriorated in condition and either died from starvation or were euthanised by the environment ministry. He said there were between 80 and 120 desert-adapted lions in the region.

Stander told this newspaper that besides the natural devastation caused by the famine and the threat of conflict with humans, biological data is also being collected to determine whether a disease was at play, considering the numerous recent states of emaciation featured in the cats.

"This is unlikely though, but there might be a secondary cause to their condition, so we would just be responsible by collecting this data," he said.

He said the problem in the end was the shortage of food.

"A solution would be a combination of good rains and better management of grazing," he said.

Environment ministry spokesperson Romeo Muyunda said that besides having to put down XPL120, the ministry in February also put down a lioness in the Doro !Nawas conservancy.

"This situation has prompted the ministry to start with the review and development of the lion conservation and management plan to determine the best long-term sustainable management options on how we conserve lions in the Kunene region and elsewhere in the country where they occur, given the changing environmental and climatic conditions," Muyunda added.