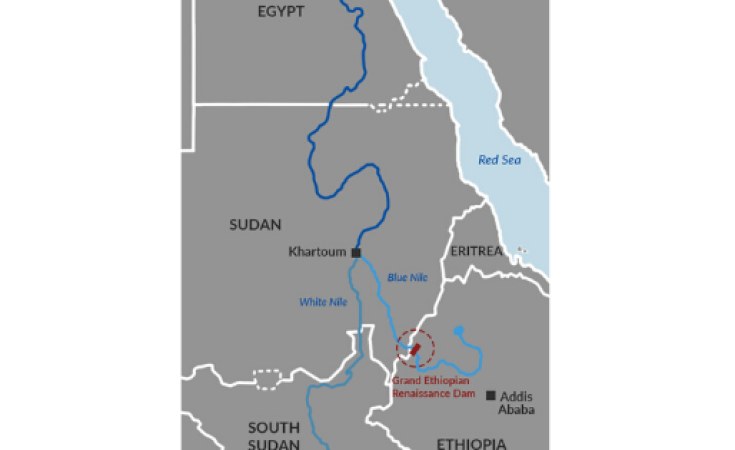 Institute for Strategic Studies
Location of GERD on the Nile River.
The Ethiopian Herald (Addis Ababa)

The corporation's CEO, Ashebir Balcha told local media that the two units have the power of generating 375 MW of energy each.

Ashebir further said that the first phase of energy generation produces more than that of Tekeze and Gilgel Gibe combined which have the capacity of generating 300 MW and 420 respectively.

The two units are planned to generate 400 GW/H having the capacity to provide about 4 million populations with energy facility, CEO underscored.

GERD National Public Participation and Coordination Office also remarked that the project is well underway as the two water tunnels have been completed and started operating last week.

The civil work of the project has been completed 91 percent whereas the metal works 53.7 percent with an overall progress of 79 percent, as to the office.

The reservoir accumulated 4.9 billion cubic meter of water by the first round filling carried out in July 2020, as to the Office.

The Office General Director Aregawi Berhe (Ph.D) said that the 8100 A messaging campaign escalated public's commitment to support the project.

Likewise, EthioTelecom has contributed 122.5 million Birr secured through 8100 messaging campaign to the project during a handover ceremony organized at Hyatt Regency Hotel in April 2020.

We Must Safeguard 20 Million People Downstream of Dam - Govt