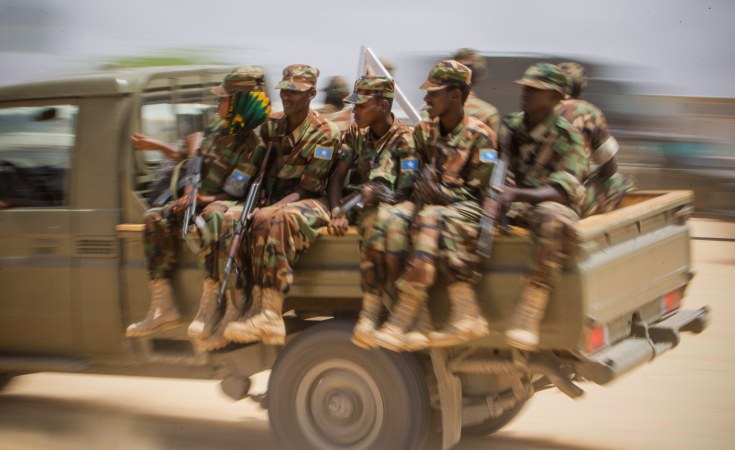 Somalia's key opposition figures were on Monday afternoon holed up in a meeting with the country's donors even as reports indicated fractures within the national army.

Following clashes on Sunday in the capital Mogadishu, pitting clan militia groups against soldiers of the federal government, opposition groups under the Council of Presidential candidates were meeting with Western donors, ostensibly to raise complaints against the government.

Ex-President Hassan Sheikh Mohamud said his home had been attacked by a special unit of the security forces trained by Turkey. It was reportedly targeting militia guarding opposition leaders.

Although army spokesman Abdullahi Abdulkadir rubbished those claims, the reports of divisions could harm Somalia's plans to combat terror group al-Shabaab and could make the country ungovernable.

"Attacking residencies of former President HSM and AAW is a reckless move that will have serious consequences," said Omar Sharmarke, who was Prime Minister during Mohamud's presidency, referring to the ex-leader's initials and those of former Planning Minister and Wadajir leader Abdulkadir Abdishakur, both of who claimed their homes had been attacked by government forces.

"It is self-evident that the outgoing FGS (federal government of Somalia) is viewing the battlefield as the strategic course in solving the stalemate and the upcoming negotiations merely as a tactical move."

Information Minister Osman Dubbe told the media that government forces had responded to "shut down" militia who had entered the capital "with aim of instilling fear and panic among the public." The Interior Ministry, in a statement issued on Sunday night warned against "politicisation" of security agencies.

But observers were quick to link the incidents to the current impasse over an election model to choose. Two weeks ago, the Lower House of Parliament passed a controversial motion, extending the term of incumbents by "not more than two years". The opposition groups attacked on Sunday have opposed the move. They are usually guarded by loyal militia who include soldiers trained under the Somali National Army. They are known as the National Guard.

Prime Minister Hussein Roble called the attacks a "tragedy" which had disrupted security in the capital Mogadishu.

"I believe that dialogue is the best solution open to us, a process that I have begun and hope for success. Let's work together for peace and stability in our country," he wrote on his Twitter page on Monday.

As tension arose over the electoral stalemate, the African Union advised Somalia to resume dialogue and hold indirect elections as earlier agreed under a September 17 Agreement. The AU will be sending an envoy to Mogadishu to help mediate, a session of the AU Peace and Security Council decided on Thursday.

It also asked the African Union Mission in Somalia to monitor troop deployments by the various branches of government.

Although leaders agreed on a delegate system, they have disagreed on venues and composition of electoral management teams. The motion by Parliament effectively ended talks on indirect elections as Farmaajo said two years will deliver one-person-one-vote.

"IGAD is deeply concerned by violence in Mogadishu and urges all parties to act with utmost restraint, return to dialogue and stay the course towards resolving the electoral crisis," said regional bloc Intergovernmental Authority on development in a statement.

"All parties have responsibility to ensure life, properties and civilian institutions are protected."

But even as the world rallied for dialogue, sceptics think the international community provided leeway to President Farmaajo: He initially promised universal suffrage before reality of security and financial challenges kicked in, forcing leaders to agree on indirect elections.

"Maybe there was a political agenda that was never satisfied with an inclusive agreement," observed Sharmarke.

"The FGS leadership turned what was initially deemed as low intensity, rather easy to solve, electoral issues into an intractable conflict with mounting violence. No longer capable of solutions."

PM Calls for Election Amid Unrest