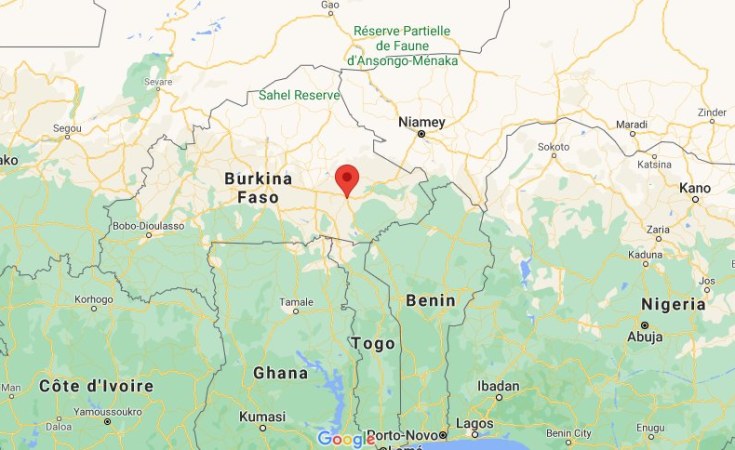 Google Maps/screenshot
A map showing the location of the town of Fada N'Gourma in Burkina Faso.
Deutsche Welle (Bonn)

Security sources say an anti-poaching patrol accompanied by Western journalists was targeted by armed attackers. Two Spanish and one Irish citizen were confirmed to have been killed.

At least three people were killed in Burkina Faso following an armed ambush on an anti-poaching patrol Monday.

The victims included two Spanish citizens and an Irish national, along with a member of the Burkinabe armed forces who was reported missing.

Spanish Prime Minister Pedro Sanchez said David Beriain and Roberto Fraile had been filming a documentary before they were killed. "The worst of news is confirmed," Sanchez posted on Twitter.

"Our recognition to those who, like them, carry out courageous and essential journalism from conflict zones on a daily basis," Sanchez tweeted.

Spanish Foreign Minister Arancha Gonzalez Laya told a news conference that the two men were making a documentary on the measures taken by Burkina Faso to protect national parks and natural resources.

Irish Foreign Affairs Minister Simon Coveney said he had learned of the death of journalist Rory Young "with deep dismay," condemning "in the strongest possible terms the actions of those who are responsible for this attack."

At least three people traveling as part of the convoy were also injured.

The incident occurred during the daytime in the Fada N'Gourma-Pama area in eastern Burkina Faso. In addition to the NGO workers, the patrol group also consisted of soldiers, forest rangers and foreign journalists.

No group has yet claimed responsibility for the kidnapping. Authorities are conducting a search.

Burkina Faso, one of the world's poorest countries, faces a precarious security situation due to the presence of jihadist groups such as al-Qaida and the "Islamic State" (IS) in the Sahel region. The country also borders Mali, which has faced an armed insurgency since 2012.

Armed groups frequently cross the porous border between Mali and Burkina Faso to conduct raids, with Burkina Faso also serving as a hub for weapons trafficking. According to the Geneva Center for Security Sector Governance, the local security forces are poorly equipped and lack the operational capacity to effectively keep the country safe from external threats.