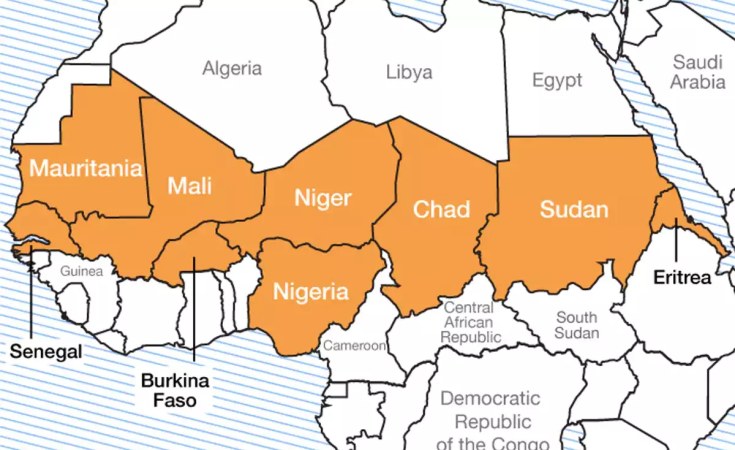 The Conversation/Zenobia Ahmed
The Sahel region of Africa is a 3,860-kilometre arc-like land mass lying to the immediate south of the Sahara Desert and stretching east-west across the breadth of the African continent.
Deutsche Welle (Bonn)
analysis By Cai Nebe

The killing of Chadian President Idriss Deby by northern rebels rocked the Sahel country and tossed the regional G5 security alliance into disarray. But how are Chad's neighbors reacting?

Many observers agree that in the aftermath of Deby's, the Sahel region's fight against Islamist extremism hangs in the balance.

"Chad has played a very instrumental role in combating violent extremism across the Sahel, which the military has been deployed in other countries, Mali, Niger Republic," says Dr. Christopher Fomunyoh of the National Democratic Institute for International Affairs in Washington, D.C.

He adds that Chad's battle-hardened troops are a "very strong component of the multinational task force in the Lake Chad basin."

"People are going to feel the loss of Deby, the impact that he had on the Chadian military, and Chad's ability to focus on external interventions," Fomunyoh told DW.

The void left by Deby, who was allegedly killed on the frontline fighting rebels belonging to the Front for Change and Concord in Chad (FACT), has left a power vacuum and a formerly stable country teetering on edge. Deby was a powerful ally for multilateralism in the Sahel and Western powers, but he made many enemies in Chad.

Niger's President Mohamed Bazoum has been named mediator of the G5 countries to find a peaceful solution in Chad. The G5 is made up of Burkina Faso, Mali, Niger, Chad, and Mauritania.

However, Bazoum's new role has been complicated by reports that Chadian rebels, enemies of Deby's regime, have sought refuge in Niger and use the country as a base. Nigerien officials officially rejected claims that Bazoum was negotiating with rebels. Opponents of Chad's military junta argue Bazoum will act in the Chadian army's interest.

"President Deby gained diplomatic influence in the Sahel, especially from countries that needed military support in the fight against violent extremist groups in the Sahel," Paul-Simon Handy, head of the Conflict Prevention and Risk Analysis Division of the Institute for Security Studies in Pretoria, told DW.

"Niger wants to provide a solution, and I do not think Niger can be blamed for its efforts to find a coalition in Chad," Handy said.

Nigerien analyst Moussa Aksar says President Bazoum's ties with the Chadian authorities, and Deby, in particular, is a matter of concern and places his legitimacy as a mediator under scrutiny.

"The rebels are taking advantage of this relationship to say the Nigerien authorities have already sided with the military regime against the rebels," Aksar told DW.

While both Chad and Niger have worked closely together to fight Islamist terrorism in the Sahel, Bazoum's close ties to the Chadian military are a sensitive topic.

There is dissent towards Chad's transitional military government and particular anger at Idriss Deby's son, General Mahamat Idriss Deby, who took over his father's leadership.

Meanwhile, clashes have already broken out in the capital N'Djamena. On Tuesday, Security forces brutally suppressed a peaceful march against the military transitional government. At least five people are reported dead.

Many Chadians took to the streets in several cities to express their disapproval and demand the departure of the military government. Chants of "Chad is not a monarchy" and "No power from father to son" could be heard on the streets. The demonstrators also targeted French institutions accusing Paris of supporting what they called a military coup.

Success Masra, president of the opposition Transformers Party, described this repression as barbaric. "This country is becoming ungovernable. The solution is to bring back civilian power and stop this dynastic transmission of power that will get us nowhere. And to allow a dialogue to take place that will lead to elections that will allow Chadians to choose those who will lead them," Masra told DW.

France, which initially said it backed the junta, seems to have shifted its position, with President Emmanuel Macron calling for a civilian transitional military government.

More attacks in the Sahel region

Meanwhile, in a virtual meeting with US Secretary of State Antony Blinken, Nigerian President Muhammadu Buhari called on Washington to consider moving its military US Africa Command (AFRICOM) headquarters to the continent from Germany. Buhari argued that such a move would help to tackle the growing armed violence in the region. Nigeria is in the midst of a decade-long battle against Boko Haram Islamist insurgents.

According to local security sources, in northern Burkina Faso, gunmen killed around 15 people in a night raid on several villages near the Niger border. Additionally, two journalists and a conservation official were killed in Burkina's Arly National Park.

The United Nations and other humanitarian organizations say 29 million people need humanitarian aid in the Sahel, noting "unparalleled" insecurity and hunger across six countries in the war-torn African region.

Previous Story
With Transitions Underway in Mali and Chad, the Sahel is at a Crossroads
Next Story
A Year On, No Justice for Victims of 2020 Protests & Coup

With Transitions Underway in Mali and Chad, the Sahel is at a Crossroads

A Year On, No Justice for Victims of 2020 Protests & Coup