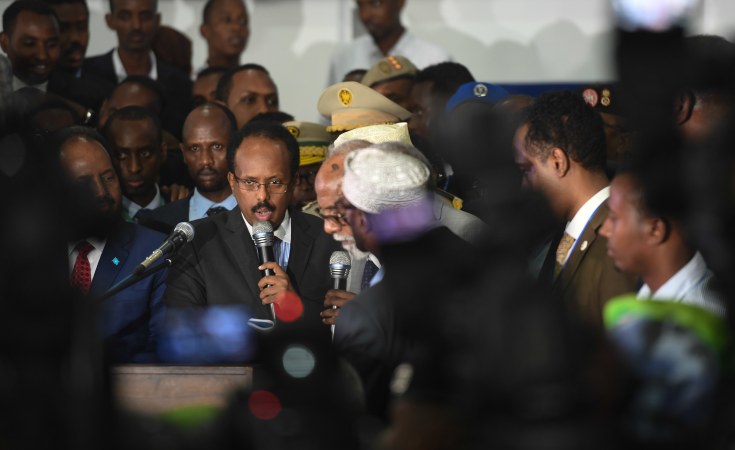 Ilyas Ahmed/UNSOM Somalia/Flickr
Mohamed Abdullahi Farmajo is sworn in as president after he was declared the winner of the election held at the Mogadishu Airport hangar in Mogadishu on February 8, 2017.
Radio France Internationale
By Daniel Finnan

Somalia's President Mohamed Abdullahi Mohamed on Tuesday bowed to pressure over his bid to extend his presidential term, saying he would instead ask Somali lawmakers to restore an agreement calling for the election of MPs who would then elect the country's president.

Mohamed, commonly referred to as Farmajo, made a U-turn during a televised address when he went back on a resolution passed by parliament giving him a two-year extension to his term in office.

The power grab by Farmajo sparked three days of clashes in Mogadishu between different factions of the security forces, some supporting the president, others throwing their weight behind those opposed to him.

The violence caused some Mogadishu residents to flee, and raised the spectre of a return to civil war years after the country recovered from conflict.

In his address, Farmajo said he would appear before Somali lawmakers this weekend to request that they put back in place a deal between the federal government, leaders from the five states and governor of Mogadishu.

The original plan, known as the "17 September agreement", outlined the election of federal MPs through elections, who would then vote on a president.

BREAKING: Somalia President @M_Farmaajo says he will appear before the Lower House of Parliament on Saturday to ask lawmakers to restore the Sept 17 agreement. If the House approves the request it will reverse the two-year term extension passed by the lawmakers on April 12. - Harun Maruf (@HarunMaruf) April 28, 2021

The polls are a somewhat complicated indirect system when clan elders choose lawmakers who then select the country's leader.

Parliament had thrown out that agreement in April, giving the government two more years to hold elections. But now Farmajo will look to reverse that extension.

Farmajo was trying to stay in power indefinitely, according to Mohamed Mubarak, head of Marqaati, a Somali anti-corruption organisation, talking about the start of skirmishes in Mogadishu.

Kenya v Somalia maritime dispute: the difficult task of drawing a line in the sea

"He attacked them in their homes using heavy weapons. Clan militias and sections of the security forces defected to protect the opposition politicians," said Mubarak.

One former president Hassan Sheikh Mohamud accused the sitting president of being responsible for an attack on his residence, as different factions of the security forces took up positions in the capital.

Farmajo's term came to an end on 8 February and the country's parliament should have been dissolved at the end of December 2020. The failure to organise elections led to street demonstrations.

The crisis started because of Farmajo's attempt to hang on to power without having legitimate authority, according to Nuradin Dirie, a senior advisor to president of Puntland, one of the country's federal states.

Farmajo on Tuesday night said the only solution was dialogue and compromise, calling on all parties to hold talks to discuss the way forward and implementing the 17 September agreement.

The political crisis had led to polarisation amongst the army and police, with the US warning that the Somali military was fracturing along clan affiliation.

"The armed forces split is very serious and will affect the stability of Somalia beyond the current election cycle," Mubarak told RFI.

Some questioned whether the Somali military, which has been largely supported by the African Union's AMISOM peacekeeping force, notably in the fight against the Al-Shabaab hardline militant group, would break up into different factions.

"The armed security forces that have been built over the past few years in Somalia, haven't had enough time to prove to themselves that they can survive political differences," said Dirie, who previously acted as an advisor to the UN mission in Somalia.

"I don't think Farmajo is tenable any more, I don't think he can be part of future solutions," said Dirie, highlighting the president's move to break the constitution and stay in power by force.

Between 60,000 and 100,000 people have fled their homes since Sunday over the fighting and threat of an escalation in violence, according to the UN.

Somali Prime Minister Mohamed Roble has now called on civilians to return to their homes.

The UN Security Council had warned that the country's political crisis was distracting from serious problems, such as the fight against Al-Shabaab and dealing with the coronavirus pandemic. 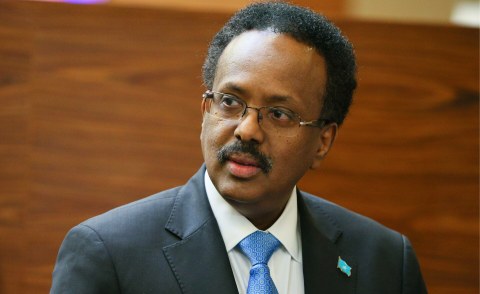 Somalia's Parliament Votes to Cancel Presidential Term Extension
Tagged:
Copyright © 2021 Radio France Internationale. All rights reserved. Distributed by AllAfrica Global Media (allAfrica.com). To contact the copyright holder directly for corrections — or for permission to republish or make other authorized use of this material, click here.