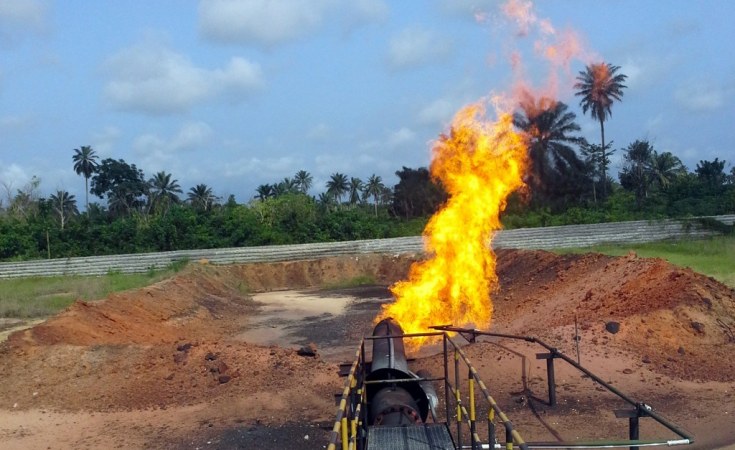 The World Bank says the seven countries produced 40 per cent of the world's oil each year, but accounted for roughly 65 per cent of global gas flaring.

It added that the satellite was first launched in 2012.

It said the seven countries produced 40 per cent of the world's oil each year, but accounted for roughly two-thirds (65 per cent) of global gas flaring.

"This trend is indicative of ongoing, though differing challenges facing these countries.

"For example, the U.S. has thousands of individual flare sites, difficult to connect to a market.

"However, a few high flaring oil fields in East Siberia in the Russian Federation are extremely remote, lacking the infrastructure to capture and transport the associated gas."

The report said that 2020 was an unprecedented year for the oil and gas industry, with oil production declining by eight per cent, while global gas flaring reduced by five per cent.

"The U.S. accounts for 70 per cent of the global decline, with gas flaring falling by 32 per cent from 2019 to 2020, due to an eight per cent drop in oil production, combined with new infrastructure to use gas that will otherwise be flared."

Demetrios Papathanasiou, Global Director for the Energy and Extractives Global Practice at the World Bank said in the wake of the COVID-19 pandemic, oil-dependent developing countries were feeling the pinch, with constrained revenues and budgets.

"However, with gas flaring still releasing over 400 million tons of carbon dioxide equivalent emissions each year, now is the time for action.

"We must forge ahead with plans to dramatically reduce the direct emissions of the oil and gas sector, including from gas flaring."

Meanwhile, Zubin Bamji, Program Manager of the World Bank's GGFR Partnership Trust Fund, said awareness of gas flaring as a critical climate and resource management issue was greater than ever before.

He said that almost 80 governments and oil companies had committed to Zero Routine Flaring within the next decade and some were also joining the global partnership, which was a very positive development.

"In the lead-up to the next UN Climate Change conference in Glasgow, we continue to call upon oil-producing country governments and companies to place gas flaring reduction at the centre of their climate action plans.

"To save the world from millions of tons of emissions a year, this 160-year-old industry practice must now come to an end," he said.

The report said gas flaring was the burning of natural gas associated with oil extraction which took place due to a range of issues, from market and economic constraints, to a lack of appropriate regulation and political will.

The practice resulted in a range of pollutants released into the atmosphere, including carbon dioxide, methane and black carbon also known as soot.

It added that the methane emissions from gas flaring contributed significantly to global warming in the short to medium term, because methane was over 80 times more powerful than carbon dioxide on a 20-year basis.

The World Bank's GGFR is a trust fund and partnership of governments, oil companies and multilateral organisations working to end routine gas flaring at oil production sites around the world.

GGFR, in partnership with the U.S. National Oceanic and Atmospheric Administration (NOAA) and the Colorado School of Mines, had developed global gas flaring estimates based upon observations from two satellites, launched in 2012 and 2017.

The advanced sensors of these satellites detected the heat emitted by gas flares as infrared emissions at global upstream oil and gas facilities. (NAN)