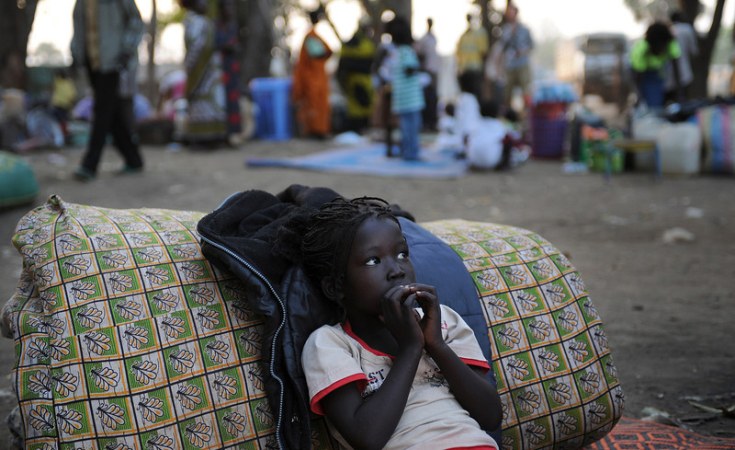 UN
The United Nations humanitarian chief, Valerie Amos, announced today that she has allocated more than US$20 million to help alleviate the suffering of the recent wave of Sudanese refugees fleeing into South Sudan from the conflict in South Kordofan and Blue Nile States (file photo).
Radio Dabanga (Amsterdam)

He confirmed that the clashes caused a "large number" of deaths and injuries, although the exact figures are not yet known due to continuing confrontations. The mayor further confirmed that a third party entered the conflict and that military reinforcements have arrived to contain the situation.

Hussein stated that the wali (governor) of South Kordofan, Hamid El Bashir, had failed to provide security for the state. He told Radio Dabanga that currently, the region is in a state of chaos in which people have been killed.

In a separate event, Jahallah Mohamed Osman Khalid died while in custody at the police station in Dibebad, South Kordofan, on Tuesday. His body has been transferred to the mortuary in El Obeid, capital of North Kordofan, so that the cause of death can be determined.

Witnesses from Dibebad told Radio Dabanga that Khalid was arrested for stealing solar panels. The witnesses also indicated that the family of the deceased refused to receive the body of their son until an autopsy had taken place because there are reports that the deceased has been tortured in police custody.

People from Dibebad blocked the road to El Obeid on Tuesday in response to the incident.

In the Nuba Mountains, one man was killed while another was wounded in an ambush by gunmen from the village of Kadabar in South Kordofan yesterday. Sources from the area told Radio Dabanga that an armed group stole cows from Kadabar, causing panic among the villagers.

Last week, at least four people died and 18 were wounded when clashes erupted in Abbasiya after the theft of a rickshaw. Earlier this month, a villager was killed while he was working on his farm in Habila locality and two others were killed in the same area on the same day in a separate incident.

These are not the only violent incidents in the Habila locality recently. Radio Dabanga reported on the death of two other farmers who were killed at the end of last month by unidentified gunmen. A case was filed at the police station, but no action was taken.

In the same month, a Hausa omda (community leader) was killed during an attack at his home in South Kordofan in March. His relatives reported the case to the police of the town, but no investigations have been done.

South Kordofan witnessed protests earlier this year over the rampant insecurity in the region. At the start of January, Radio Dabanga reported on a surge in violence and crime in the western parts of South Kordofan. People are particularly frustrated about the lack of police action.