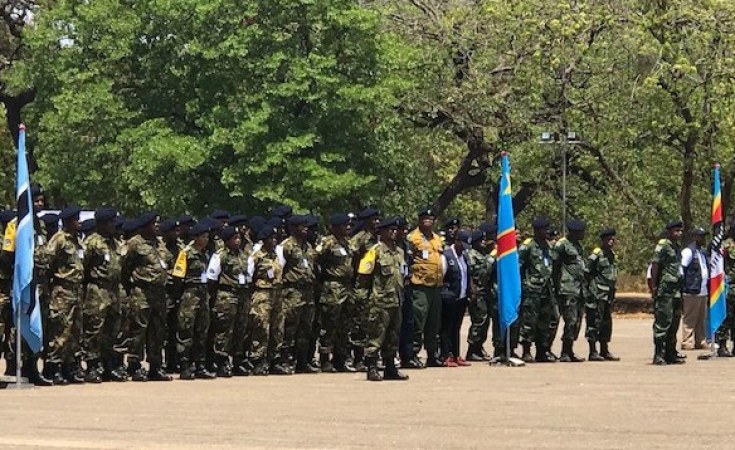 SADC
Troops from Malawi, the DR Congo and eSwatini at a Southern African Development Community joint training exercise in 2018.
The East African (Nairobi)
By Kitsepile Nyathi

Southern African leaders will meet on Thursday to consider recommendations by security chiefs to deploy a 3000-strong rapid response force in Mozambique as the region moves to neutralise insurgents in that country.

South African President Cyril Ramaphosa, Emmerson Mnangagwa of Zimbabwe, Mokgweetsi Masisi of Botswana, who are leaders of the Sadc Organ on Politics, Defence and Security Cooperation and Mozambique President Filipe Nyusi will decide on the recommendation to deploy a regional military intervention force immediately.

Their summit in Mozambique's capital Maputo will be preceded by a meeting of Foreign Affairs ministers from the same countries on Wednesday.

"This important ministerial troika meeting will be held pursuant to the decision of the Sadc Double Troika Summit held in Mozambique on April 8, which directed an immediate Sadc Organ deployment to the Republic of Mozambique and the convening of the extraordinary meeting of the ministerial organ troika by April 28 to consider the outcome of the technical deployment and report to the extraordinary troika," Zimbabwe's Foreign Affairs and International Trade ministry said in a statement.

They concluded that although there was a lull in fighting since the Mozambican army recaptured the town of Palma after it was overrun by the jihadists last month, the retreat could have been due to the start of the holy Muslim month of Ramadhan.

"The possibilities of renewed attacks are high after Ramadhan. However, this does not rule out the likelihood of attacks during the fasting period," reads part of the mission's report.

It added that Mozambique's security forces needed immediate support "to combat the threat of terrorism and acts of violent extremism in Cabo Delgado."

Sadc leaders, however, would have to convince President Nyusi to accept the deployment of the force as he has previously been reluctant in accepting boots on the ground from Mozambique's neighbours.

The Mozambican crisis worsened on March 25 when an armed group linked to the Islamic State (ISIS) besieged the gas-rich town of Palma in northern Cabo Delgado province, killing hundreds of civilians and displacing thousands.

Cabo Delgado has, since 2017, been under siege from the Ansar al-Sunna group, known locally as Al- Shabaab which is not linked to insurgents in Somalia going by the same name.