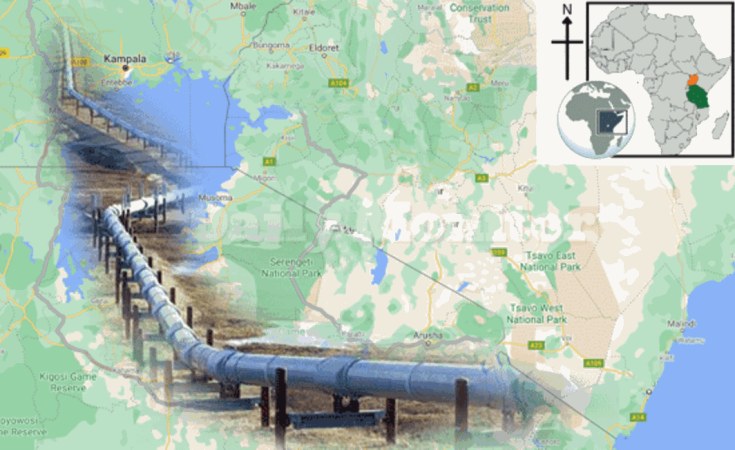 Africa does not need the East Africa Crude Oil Pipeline.

We are living in a climate crisis fuelled by fossil fuels, which may have catastrophic impacts on the African continent. Yet, in the midst of this, the Ugandan and Tanzanian governments together with oil firms have signed an accord to build the East African Crude Oil Pipeline (EACOP.) A 1,445-kilometer pipeline that will transport oil from Hoima, Uganda to the port of Tanga in Tanzania.

The argument given for going ahead with the pipeline is that it will ignite development in the region. However, investments in fossil fuels are a dead end, and developing such a huge Oil Pipeline will not only support the extraction of oil that is driving climate change, but also lead to social and environmental challenges such as massive land-grabbing, threats to land and marine ecosystems as well as biodiversity loss, combined with air and water pollution leading to serious health impacts for Tanzanians and Ugandans. A report by BankTrack indicates that the current plan for the pipeline will lead to the loss of an estimated 14,000 households across Uganda and Tanzania, hundreds of families will need to be resettled and thousands more will be affected by the associated oil development projects leading to loss of livelihoods.

The increasing frequency and magnitude of extreme weather events in Africa and East Africa driven by the climate crisis are pushing communities beyond their capacity to cope. The cycle of droughts, floods, and now locusts, brings devastating impacts on the people of East Africa. Fossil fuels such as oil and coal are not only fuelling the dangerous climate crisis that threatens the lives and livelihoods of millions of people in Africa but also cause immense harm to people, communities, and the environment. Various African countries are already suffering paralysing climate change impacts. Recently, cyclone Idai led to the deaths of over 1,000 people across Mozambique, South Africa, Malawi, and Zimbabwe and left 2.6 million people in desperate need of humanitarian assistance. Last week, East Africa experienced cyclone Jobo that hit multiple countries including Tanzania. Fossil fuels such as coal and oil lie at the heart of a broken energy system that is unjust and unsustainable and destroys people and the planet.

But there is a viable and sustainable solution: renewable energy.

Africa's plentiful renewable resources and large population under the age of 25 presents an opportunity for Africa to be the future and hope of the world economy. Renewable energy sources such as solar and wind offer Africa the opportunity to produce affordable and clean energy, reduce dependence on fossil fuels such as coal and oil and enable mass employment in sustainable transitions. Africa's vast solar resources from the Sahel to the Horn of Africa provide the continent with a chance to emerge as the global leader in the drive towards 100 percent renewable energy.

Renewable energy is a viable alternative to the fossil fuel industry's business model, particularly in terms of its promise of decentralised, secure energy owned by the consumer. The abundance, healthy and sustainable nature of renewable sources continue to be a threat to fossil fuels because they can relegate fossil fuels to the history books. That is why many supporters and investors of fossil fuels are now grudgingly saying that we can have both renewable energy and fossil fuels. The truth is, we can't have both, or we risk pushing the climate crisis into a catastrophe. We must shift away from fossil fuels in a just transition to protect our future.

With the sustainable and economic possibilities of renewable energy why take the risk that EACOP poses to communities in East Africa and particularly the Lake Victoria basin? Oil transport could lead to devastating oil spills. Last year a ship ferrying oil crashed into one of Mauritius' coral reefs. As a result, the ship spilled significant amounts of oil into a very fragile environment. Before the leak was stopped, about 1,000 tonnes of oil had seeped into the Indian Ocean, severely contaminating Mauritius's shoreline and lagoons in what has now become the worst environmental disaster that the country has ever known.

In the case of EACOP and oil extraction in Uganda, there are serious risks of degrading the ninth most biodiverse region in the world . Oil extraction will degrade the rich ecosystems in the Albertine Graben region, which is home to half of all African bird species. The EACOP will cause destruction and loss of cultural sites and value, and lead to habitat disturbance to nearly 2000 kilometres of protected wildlife habitat.

New incoming investment needs to be directed towards ensuring a just transition from fossil fuels such as oil and coal to community-controlled renewable energy infrastructure that will actually provide energy for the people and end the ongoing inequalities and afflictions caused by the fossil fuel energy regime. Investing in new fossil fuel infrastructure such as the EACOP will lock Africa into a dirty energy pathway at just that point in history when new, low-carbon, and renewable energy technologies are increasingly available.

Along with the rest of sub-Saharan Africa, East Africa needs to protect its natural heritage by championing a sustainable future powered by renewable energy sources. The EACOP will not provide this, instead, it will provide loss, inequalities, and afflictions for our communities, livelihoods, and the environment. Transforming our current broken energy system needs to be Africa's number one priority and this does not include investing in new oil pipelines or more fossil fuels.

African countries need to avoid fossil fuels to protect people now and in the future. It is time to abandon dirty fossil fuels and in a Just Transition, replace them with a people-centred transformation to low-carbon, affordable, accessible renewable energy in Africa for the benefit of the climate, local communities, energy security, and the environment.