Sudan: Another Gendered Killing Within One Month in Sudan

Lana H. Haroun
In what has become an iconic image of the Sudan protests, 22-year-old architectural engineering student Alaa Salah (@oalaa_salah) chants poetry from the top of a car, wearing traditional dress (file photo).
Strategic Initiative for Women in the Horn of Africa (Kampala)
press release

For the second time in one month,1 a girl in Sudan has been killed by an immediate family member.

On April 3, 2021, Aida Al-Mahdi, 19 years old, was killed by her brother Al-Nour, who stabbed her 6 times and slashed at her until her head was separated from her body, according to sources close to the family in the village of Tawal, Raheid Al-Bardi, South Darfur.

Her sister was the first to discover the crime. Al-Nour confessed to committing the crime, justifying that a number of young men claimed that his sister was pregnant. Although his parents confirmed the falsehood of the pregnancy allegations and provided protection for Aida two days before the crime, this did not deter Al-Nour from ending his sister's life.

Fatima (someone close to the family, whose name has been changed for reasons related to personal safety) sent a call for help to the media and human rights defenders’ groups after learning that the Traditional Administration along with the local prosecutor and law enforcement personnel have been attempting to persuade the family to accept a sum of money in exchange for pardoning the murderer. Aida’s mother reportedly agreed to these terms under heavy pressure by the Traditional Administration, while her father insisted that the perpetrator should be tried, and that the prosecutor should push for the harshest punishment.

Fatima stated: "After Aida’s killing, I do not feel safe. This is not the first crime, and she will not be the last one if there is no accountability and our lives are compensated by cows. These are the customs of our people, but the government is supposed to fear God and protect us.” She criticized the complete absence of the government’s role in protecting women and girls from crimes of gender-based violence and the complete reliance on the judgement of the Traditional Administration, stressing that the absence of accountability contributes to the rampancy of these crimes. She further shared that, "Aida was full of love for life and education, and she sat for the Sudanese certificate exam last year and scored more than 60%.  In addition to our lack of sense of safety as women, we feel we deserve independence, as we are herding and working for agriculture outputs and yet all the material returns go to the man's well-being."

The prevalence of gendered violence and killings in Sudan is enabled by the Transitional Government who continues to keep silent and turn a blind eye to the urgency of situation.

SIHA notes that this issue is not unique to Sudan, and while the contexts of each country in the Greater Horn of Africa region are different, there is a common thread of increasing violence against women and girls, whereby impunity for this violence is justified through false claims of protecting culture and tradition. This is the case particularly, in South Sudan, Somalia, and Somaliland, where SIHA calls on the region’s governments to end all forms of sexual and gender-based violence, including gendered killings, and the criminalization of women and girls in this region, under the pretext of traditions and religion.

Across the Greater Horn of Africa region, women and girls like Aida are being subjected to violence in their own homes, by their own family members, and by their own communities. The scope of ‘women, peace, and security’ (WPS) endeavors needs to be expanded to recognize that women and girls are not only or even primarily threatened by external agents of violence. Rather, they face daily threats of violence from within the very groups of people that they should most be able to trust. Thus, whether in a conflict, post-conflict, or ostensibly peaceful setting, women and girls continue to live without security.

1 See ‘Ugliest crime:’ Outcry in Sudan over lack of justice for killing of teenage girl (26 Mar 2021) by Zeinab Mohammed Salih in The Guardian: https://www.theguardian.com/global-development/2021/mar/26/ugliest-outcry-in-sudan-over-lack-of-justice-for-killing-of-teenage-girl

Previous Story
Next Story
Sudan's Children of the Revolution - Where Are They Now?

Sudan's Children of the Revolution - Where Are They Now? 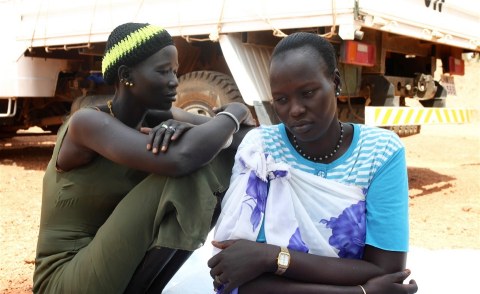