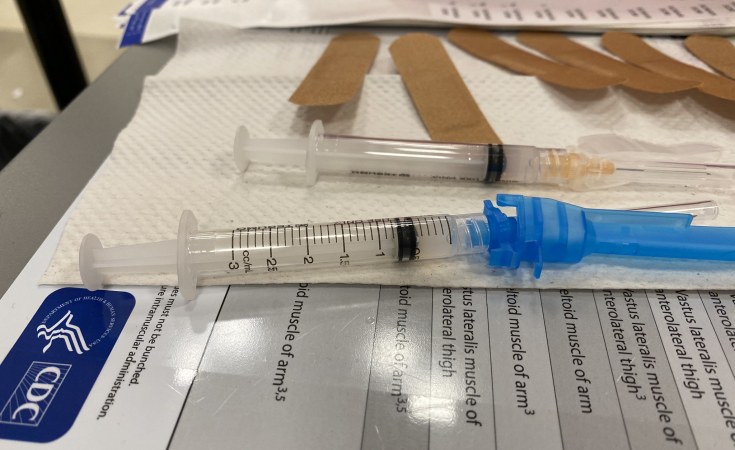 Anthony Quintano/Flickr
A photo of Covid-19 vaccine made by Moderna and administered in New Jersey in the United States.
The Conversation Africa (Johannesburg)
analysis By Andrew Pollard

Usually, World Immunisation Week is a chance for those of us who research vaccines to reinforce the message about their importance in saving lives. From whooping cough to polio, measles to meningitis, vaccines have quietly been saving millions of lives, every year, for decades.

Usually, nobody really cares or takes notice. However, 2021 is different. In this last year, we've heard a lot about public health science, from how diseases take root and are spread, to how new drug therapies - including vaccines - are developed, trialled and monitored for safety and impact after their rollout. People are aware that COVID-19 vaccines are saving lives - hundreds of thousands globally.

Normally, I'd want to join in celebrating this increased awareness of immunisation - outdoors in a group of six or less, of course. But despite our success developing COVID-19 vaccines, we need to confront a hard truth: globally, there aren't enough doses in people's arms. Nor are vaccines being spread widely enough across the world. Over 1 billion doses have been given in a matter of months, but still more than 90% of the world's population haven't been protected.

More vaccines must go where they're needed

This week, I've watched on in horror at over 2 million new cases of coronavirus in India, with more than 20,000 documented COVID-19 deaths - a figure likely to underestimate the true toll. In Brazil, there have been 400,000 cases and approximately 17,000 deaths; in the WHO European region, 1 million cases and over 20,000 deaths. Numbers so high it's almost impossible to fathom.

While we consider exiting lockdown, in many parts of the world the pandemic rages on. Case numbers have fallen to low levels in the UK, but cumulatively worldwide they are growing higher and higher each week. For much of humanity, this means time is running out.

We are seeing health systems overwhelmed in India, as they have been in Brazil. I look at the news pictures of my Indian medical colleagues and fear for them as they run out of oxygen for sick patients, of whom there are so many that some die on the hospital doorstep.

For the few governments around the world who have the power to share vaccines - such as the US and the UK, who are well on the way to high coverage and have hundreds of millions of further doses ordered - the moral argument for making international donations can be difficult. These governments are, rightly, primarily responsible for their own populations.

However, sharing vaccines is key for our own nations' self-interest. It is needed for our health security, by preventing spread and emergence of new variants, which are more likely to arise when infections are out of control as the coronavirus can mutate when it reproduces. Increasing worldwide vaccine coverage will also help our economy by opening up trade, and allow those politicians who aspire to be global actors to have their day.

And it's not just today we need to worry about. Health systems that are overwhelmed are unable to deliver normal services, meaning that key services, such as childhood immunisations, have been knocked significantly in many parts of the world. Last year there were more measles deaths globally than at any time in the past 20 years: over 200,000 - from one of the most preventable causes of child mortality.

Yes, the global scientific endeavour in vaccine development is astonishing, but we must not be complacent: the pandemic is growing, and the vast majority of people aren't protected, especially in countries where things are currently escalating. We urgently need to get vaccines to these people - to protect them, global health systems and us.