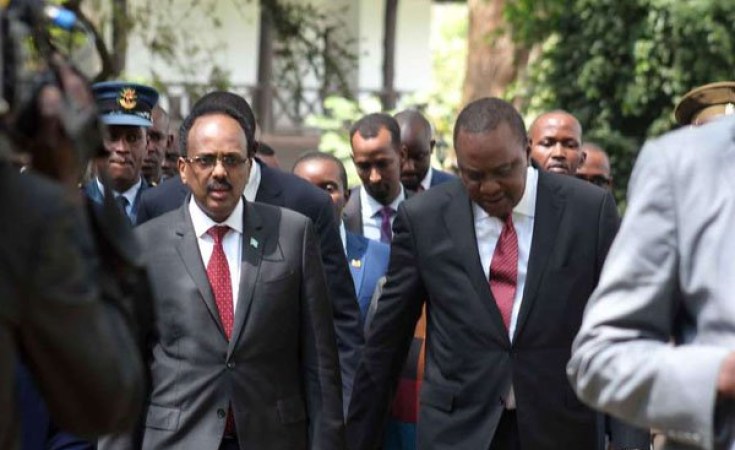 Dennis Onsongo/Daily Nation
President Uhuru Kenyatta with his Somalia counterpart Mohamed Abdullahi Farmajo after the National Prayer Breakfast at Safari Park Hotel in Nairobi on May 31, 2018.
The East African (Nairobi)
By Abdulkadir Khalif

Qatar has sent a special envoy from the office of the Foreign Minister, Mutlaq bin Majed Al-Qahtani, to Somalia to engage with the country's political rivals in what could be a change in tack for the Gulf country that has been siding with President Mohamed Farmaajo.

Dr al-Qahtani, who has been in Somalia since Saturday, is well known in Doha and Washington for helping to steer negotiations between the Taliban and the Afhani government which would allow US forces to depart without leaving a security gap.

Before his arrival in Mogadishu, the renowned strategist had transited through Hargeisa, the capital of the self-declared Republic of Somaliland, meeting President Muse Bihi Abdi.

According to statements released by Somaliland, President Bihi discussed establishment of bilateral ties with the Qatari delegation and the opening of an official diplomatic mission by Qatar. In addition, the two sides discussed a plan by Qatar's charity organisation, Qatar Charity, to equally open an office in Somaliland.

Qatar's Ambassador to Somalia, Mr Hassan bin Hamza Hashem, is part of the Qatari delegation that was in Somaliland. No further details were given on the brief visit.

Upon arrival in Mogadishu, Dr Al-Qahtani met with President Mohamed Abdullahi Farmaajo at Villa Somalia. Present at the meeting was, among others, the Director of the National Intelligence and Security Agency (NISA). Despite the high profile nature of the visit, no details on what was discussed has emerged since.

On Sunday, Al-Qahtani met the Speaker of the Lower House of Somalia's parliament, Mohamed Mursal, at the seat of the Golaha Shacabka (the Peoples' Hall). Information released afterwards stated that Mursal and Al-Qahtani discussed the outcome of the parliamentary session on Saturday that reinstated the September 17, 2020 Agreement as the sole electoral procedure for Somalia.

Dr Al-Qahtani also met with the Speaker of the Upper House of Parliament (Senate), Abdi Hashi Abdullahi, who also happens to be the chairman of the Somali National Salvation Forum, a coalition that opposed the position of President Farmaajo on the electoral processes.

Having seen a good number of influential figures, Dr Al-Qahtani met with Prime Minister Mohamed Hussein Roble, just a day after President Farmaajo assigned him the responsibility of executing duties regarding election preparations and its security.

Doha has said it is interested in seeing a peaceful transition in Somalia, a slight departure from propping up Mr Farmaajo for the last four years to the anger of opposition rivals. Now, it seems Qatar is worried that lack of an acceptable electoral process and a peaceful transition of power could harm its interests more.

According to official information released after the meeting at PM Roble's residence, the two sides discussed bilateral relations between Somalia and Qatar, ongoing counter-terrorism efforts and the thorny issues surrounding the electoral process in the Horn country.

An editorial by Garowe Online, a largely Somali news outlet, stated that with the coming of Al-Qahtani, this signals Qatar's seriousness in wanting to help Somalia.

"After all, his pedigree is of one able to put the toughest conservatives at a table to negotiate a deal," the editorial noted.

The Qatari envoy's visit comes just days before Mogadishu welcomes the African Union's envoy. Indeed, Garowe Online's editorial questions whether the Qatari's visit is meant to undercut that of the AU.

Next in line to meet Dr Al-Qahtani are the other signatories of the September 17 agreement, namely the five leaders of the federal member states of Puntland, Galmudug, Hirshabelle, Southwest and Jubbaland, plus the Mayor of Mogadishu.

Somalia Normalises Relations With Kenya on Intervention By Qatar