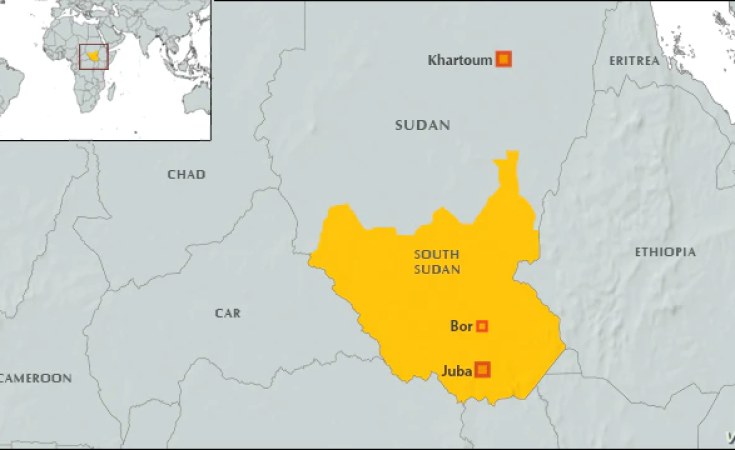 VOA
A map showing the location of Bor in South Sudan.
Voice of America (Washington, DC)
By Deng Ghai Deng

The president donated 12 truckloads of food to victims of last year's massive floods while visiting Bor on April 1.

David Garang Goch, chairperson of the Jonglei State Civil Society Network, said he saw some of the food being offloaded from a truck straight into shops at Bor's Marol Market this week.

The deputy mayor of the municipality, Mabil Tot, who was tasked with distributing the food to beneficiaries, denied that officials had sold any of the donated food in markets, saying his office promptly turned over the food to residential community leaders for distribution among the displaced.

Given to block leaders

Tot said it was possible, however, that individual recipients took the donated food to the market.

"We distributed it to the block leaders so that they can go and distribute it to the households. Bor municipality has no capacity to distribute the food house to house, so we just planned to divide the food according to the blocks," Tot told South Sudan in Focus.

Flood victims have been living in "blocks," areas designated for internally displaced persons.

Goch said the amount of food he saw being offloaded into shops was too large to belong to individuals. He also said there was no reason food-insecure people would sell their shares of the president's food donations.

The rations given were "not enough and didn't reach the people intended," Goch said. He also questioned the amount of money the government earns from the country's oil revenues and insisted that some of the food donations were "taken by the government officials."

Goch is urging the office of the president to investigate what happened to the food donations and take appropriate measures against those found responsible for stealing food assistance.

More than 100,000 people were affected in Bor town by flash floods following heavy rains and the overflow of the Nile in 2020, according to state authorities.

Michael Ghai, a resident of the Block 2 suburb in Bor, told South Sudan in Focus he had expected to receive his ration of the president's food aid but received nothing.

More than a month, and no aid

"When our president came to Bor on April 1st, he promised to support people who are affected by the flood," Ghai said. "He brought food items. We were told the distribution will be done in different phases. ... I am now in Block 2, and up to now, I have not received any information about the food."

Corruption has been a persistent and widespread problem in South Sudan since the country won independence in 2011.

In April, on his last day as head of the U.N. Mission in South Sudan, David Shearer told reporters he had no doubt South Sudan could reignite its economy if it eliminated widespread corruption.

"There hasn't been a statement of account coming from South Sudan. ... Apparently there's been no formalized budget that's been put in place, there's no real transparency about where money is coming into the country and how it's being spent, and all those are all important benchmarks of a modern state," Shearer said.

In a 2020 report, Transparency International ranked South Sudan the second most corrupt country or territory in the world, following Somalia. The Corruption Perceptions Index ranks 180 countries and territories by their perceived levels of public-sector corruption. It draws on 13 expert assessments and surveys of business executives.