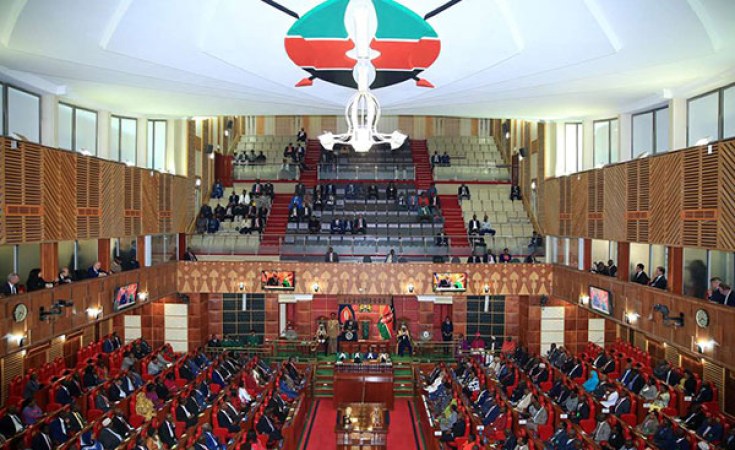 Kenya would be thrown into a constitutional crisis should President Uhuru Kenyatta dissolve Parliament as advised by retired Chief Justice David Maraga, the electoral agency has told the High Court.

In its submissions before a five-judge bench in Nairobi that is hearing 10 petitions filed in relation to Justice Maraga's advisory, the Independent Electoral and Boundaries Commission (IEBC) said there is a lacuna in law on how mass by-elections would be held in case the House is dissolved.

Through lawyer Douglas Bargorreti, the IEBC said there is no guidance in law on who would serve it with notices of vacancies in the National Assembly seats because Speakers of both Houses would also be affected by the dissolution.

He explained that the process of filling a vacancy of a member of the National Assembly begins with a notice by the Speaker to the IEBC.

He, however, stated that the IEBC is not opposed or supporting any of the 10 petitions.

At the same time, civil rights groups led by the Kenya Human Rights Commission (KHRC), Federation of Women Lawyers (FIDA) and the Law Society of Kenya (LSK) urged the court to uphold CJ Maraga's advisory and dismiss the petitions challenging it.

LSK president Nelson Havi opposed arguments by National Assembly lawyer Ahmednasir Abdullahi that Parliament does not have a perpetual succession or existence.

He also opposed Mr Abdullahi's argument that a court order issued in March 2017 requiring Parliament to enact the gender quotas law was directed to the previous House (11th) and not the current (12th).

Mr Abdullahi had told the court the order did not affect the current Parliament.

Mr Havi argued that Parliament is one and its obligations cannot be affected by the change of members.

He further added the advisory for dissolution of Parliament was not ultra vires or illegal and that the retired CJ did not act in excess of his powers.

"Public interest is best served by upholding the law. The interest of Kenyans is to have the gender rule enacted. Two arms of government, the Executive through the Attorney-General and Legislature, have failed to perform their people-given duty of ensuring gender parity. Judiciary has done its part," said Mr Havi.

For its part, the KHRC through lawyer John Khaminwa said a Chief Justice has supervisory powers to ensure orders of court are complied with.

Dr Khaminwa stated that failure by Parliament to obey the order on enactment of the two-thirds gender parity rule led the Chief Justice to advise the President to dissolve Parliament.

"Once the advisory is given, the President must comply. The Constitution uses the word 'shall', which means mandatory. The word 'shall' should not be given any other meaning. Any other interpretation is subversion of the Constitution. The Jubilee administration is notorious for disobeying court orders. The court should put down its foot and make the appropriate declaration that Parliament should be dissolved," Dr Khaminwa submitted.

FIDA also supported the dissolution of Parliament saying the petitions filed in opposition to the advisory are against the public policy.

The lawyer added the CJ was enforcing the fifth schedule of the 2010 Constitution, which required Parliament to enact a new law to give effect to Article 81 (b), which provides that 'not more than two-thirds of the members of elective public bodies shall be of the same gender'.

The law, he said, was supposed to be enacted within five years of the Constitution's promulgation but despite an extension of the timeframe in 2015 and court orders directing Parliament to enact the law, the legislature had failed to do so.

"The framers of the Constitution intended that any parliamentary lethargy would be met by a dissolution of Parliament. The framers had no other considerations to be taken into account," Mr Oduor told the five-judge bench.