Rwanda: The Commonwealth Must Call for Reforms in Rwanda 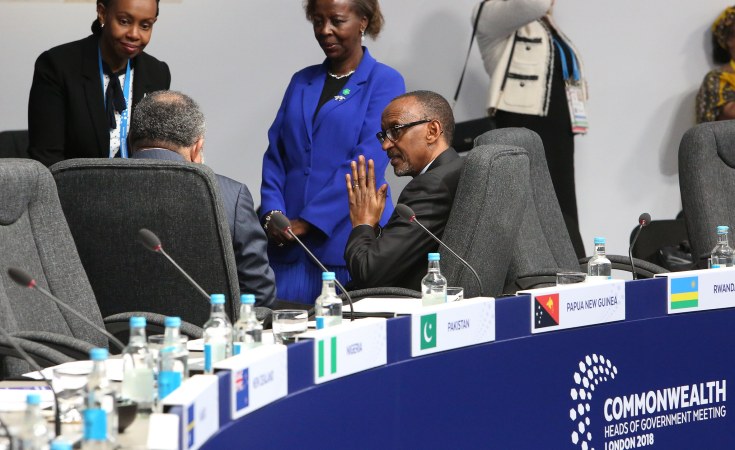 Rwanda joined in 2009 despite its poor human rights record. At the CHOGM summit this June, the Commonwealth must stand up for its values.

The Commonwealth summit in Rwanda this June is an opportunity for the association to stand for the values reflected in its charter. At the biennial Heads of Government Meeting (CHOGM), the secretariat and member states should call on their host to reform its governance, especially given that Rwanda will take over the Chair-in-Office for the next two years.

Rwanda joined the Commonwealth in 2009 despite the Commonwealth Human Rights Initiative's (CHRI) finding that "the state of governance and human rights in Rwanda does not satisfy Commonwealth standards" and that it "does not therefore qualify for admission".

For over two decades, the ruling circle in Rwanda has claimed to practice power-sharing consensus democracy with the intent of overcoming ethnic divisions and accelerating development. However, political participation has always been limited to parties affiliated to the ruling party. This leaves no space for a genuine opposition to provide checks and balances.

There is a pattern of excluding serious contenders in Rwanda's presidential elections. This is done by fabricating charges to prevent them from completing their candidacy process. This has been done to both the authors of this piece.

In 2010, Victoire Ingabire Umuhoza returned from exile to register her political party and run in the presidential election. Instead she was sentenced to 15 years' imprisonment by the Supreme Court in a politically motivated ruling. In 2014, Umuhoza appealed to the African Court of Human and Peoples' Rights (AfCHPR), which cleared her of any offence and held that Rwanda violated her rights to freedom of expression and adequate defence. Bernard Ntaganda was the nominee for the Social Party Imberakuri in the same 2010 election. He was arrested during a crackdown on opposition parties, journalists, and other perceived critics before the poll. Ntaganda was sentenced to four years in jail.

Others have faced similar fates. In 2017, Diane Rwigara expressed her desire to stand as an independent candidate. She was charged with inciting insurrection, imprisoned, and acquitted a year after the election.

Prohibition of association - preventing the creation of political parties not in line with the ruling party's ideology - is also applied in Rwanda. After eight years in jail, including five in isolated confinement, Umuhoza was released under presidential grace in 2018. She launched a new political party, Dalfa Umurinzi. However, she has not been permitted to organise a general assembly, meaning the political party cannot be registered and approved to operate.

Rwanda's government also engages in widespread human rights abuses. Arbitrary detention, including prolonged pre-trial detention has continuously been reported. Political opponents, human rights defenders and journalists still face reprisals, death, enforced disappearance, harassment and other offences for criticising the government. Many of our active supporters and independent activists have been victims of these acts.

Despite their release from prison, Umuhoza and Ntaganda have no right to leave Rwanda. Umuhoza cannot visit her family - whom she has not seen for over ten years - in the Netherlands. She must seek authorisation to leave Rwanda from the Minister of Justice but has received no response to her two attempts to do so. Ntaganda has been refused a passport.

The separation of power to guarantee the rule of law is another challenge. The power remains with the executive. The judicial system is influenced by the executive that appoints it, especially when ruling on cases involving the government's critics and interests. The parliament's counterbalancing power is weak as it has a biased composition made up of political parties selected and approved by the ruling Rwandan Patriotic Front (RPF).

Good governance that can bring about solid economic and social transformation is lacking. A development programme launched in 2000 to transform Rwanda into a middle-income country driven by a knowledge economy by 2020 has not succeeded. This is despite our government having received $17 billion from donors between 2000 and 2019.

The stories conveyed worldwide about Rwanda's development success are exaggerated. Our economy is characterised by high growth and low per capita income, high public and low private investment, high aid dependency and low exports and a small tradable sector.

The main challenges of our economy include low human capital, an undeveloped private sector, increasing indebtedness, high youth unemployment and inequality. Rwanda also has persistently higher poverty rates than peers with similar income per capita as well as a population happiness deficit.

Allegations of Rwanda government instigating instability in neighbouring countries also prevents it from benefiting from regional economic opportunities. Reconciliation policies, implemented after the genocide of the 1990s, are not inclusive. This weakens trust among our population and deters people from working together for our nation's development. Lastly, the repression of dissenting voices has infused fear, limiting fair citizen participation in development decisions.

A governance that limits political space, lacks separation of power, impedes freedom of expression, and represses critics of the government cannot lead to sustainable development. Governance reforms are a prerequisite. Rwanda's political environment must be revamped by opening political space and enabling genuine opposition to operate freely. These reforms' ultimate objective is to uphold previous achievements and build on them to reach sustainable development.

Since Rwanda gained its independence in the late 1950s, our population has experienced successive regimes that want to stay in power by any means possible and who refuse to implement reforms conducive to good governance. The repercussions have been massacres and human rights violations, culminating in the genocide of 1994. This pattern of events must be brought to an end.

COVID-19 has exacerbated the economic hardships in Rwanda, increasing risks to stability. These can only be overcome if our government is prompted and supported to make governance reforms. We therefore demand the Commonwealth Secretariat and all member states stand for Commonwealth values and call for governance reforms in Rwanda during the upcoming CHOGM.

Victoire Ingabire Umuhoza is a Rwandan politician and chairperson of Development And Liberty For All (DALFA)-Umurinzi, a political party that is yet to be recognised in Rwanda, with the focus to campaign for political space and sustainable development in Rwanda.