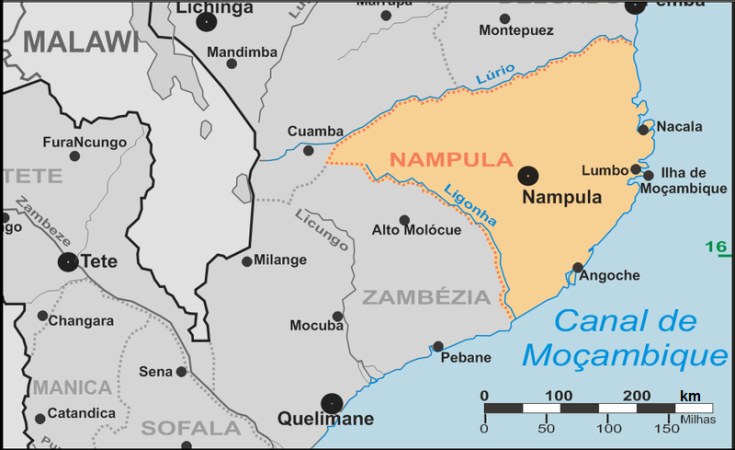 Contrary to predictions and claims, "trafficking networks have shifted to new and safer routes … outside the insurgent-controlled area, which is highly militarized." Contrary to perceptions and predictions that insurgents would gain funding from illegal trade, "our research in northern Mozambique in January and February 2021 has found there is little evidence to suggest that illicit economies have in fact become a major source of income for the insurgents," according to a 28 April report the Global Initiative Against Transnational Organized Crime (GI-TOC). This is the international agency that has become the best informed experts on Illicit Economies in Eastern and Southern Africa.

The full report is on https://globalinitiative.net/analysis/esaobs-risk-bulletin-17/. It contains a good and detailed map of trafficking routes, below, and in clearer form on http://bit.ly/Moz-traffic-map

"The ongoing fighting has had a knock-on effect on the … various trafficking routes - for heroin, rubies, gold, timber, wildlife - and migrant-smuggling routes -  which have long been entrenched in Cabo Delgado for decades."

After extensive research, "no evidence was found linking the ASWJ [Ahlu-Sunna Wa-Jama'a insurgents, known locally as al Shabaab or machababos] with the dhow-based drug supply route." And GI-TOC explicitly criticises the 11 March claim by US government counterterrorism envoy John Godfrey of "a nexus between terrorism finance and narcotics trafficking in Mozambique. ”

There are three drug routes, and all have changed in response to the war cutting roads. The main traditional route has been dhows travelling from the Makran coast of Pakistan to offshore of northern Cabo Delgado, where drugs are sent in small boats to beaches to be picked up by vehicles. The drug shipments, now half heroin and half methamphetamine, have moved south to beaches around Pemba, Nacala and Angoche. "One heroin trafficker know to the GI-TOC who had previously been based in Mocimboa da Praia had since moved south to Nacala."

The second route is larger shipments in containers, and some traffic has shifted from dhow to container. Containers arriving in Pemba from Pakistan sometimes contain heroin and those from Brazil carry cocaine. "These high volume traffickers reputedly enjoying support from senior party and government officials."

There is an implicit agreement that this is a transit trade, and that the heroin goes on to South Africa and none stays behind in Mozambique. So local demand in Cabo Delgado has always been supplied by a third route, in vehicles going from Tanzania across the Unity Bridge and through Mueda. This, too, has moved west, crossing into Niassa and then through Lichinga.

People smuggling used to also go down the coast in dhows with people dropped on beaches on moonlit nights. Now the route has shifted west and is by road via Malawi. GI-TOC investigators discovered a long-standing other route, by air. On Nairobi to Pemba LAM flights, after the plane has boarded, empty seats are filled with people being smuggled, and who are not registered. On arrival in Pemba, they are admitted by a trusted immigration officer.

Gemstones now appear to be exported via Malawi and flown to Asia, often as part of the illicit wildlife trade which includes lion teeth and claws and live pangolins from the Niassa reserve. But the ivory trade seems to have been stopped and GI-TOC found no evidence of ivory moving through Pemba or Malawi. There is some artisanal gold mining in insurgent controlled areas of Mocimboa da Praia and insurgents probably benefit from this.

Investigations about illegal trade by GI-TOC also generated information about the war itself. "The fact that the profits from both licit and illicit markets in Cabo Delgado were being channelled to a narrow political and military elite left people in the region impoverished and angry and contributed to the growing insurgency. For example, some early recruits into the organization were reported to be drawn from the communities of artisanal miners operating in Montepuez," especially after 1996 legislation criminalised most artisanal mining and 3600 miners were arrested in 2017. "Initial recruits from the area were attracted by ASWJ's [insurgent's] rhetoric of rejecting a predatory government hat they felt was excluding them from mineral resources on their land," the GI-TOC reports says.

War supplies and new recruits are carried at night on dhows the 200 km from Mtwara, Tanzania, to Mocimboa da Praia, according to local sources in January. Small islands in the Rouvma estuary are also used as logistic bases. There has also been active recruitment among the youth of Zanzibar and some have travelled to Mtwara to join the insurgents.

An English translation is now available of the key report by Joao Feijo of the Rural Observatory (OMR), "Characterization and social organization of machababos [insurgents] from the discourses of kidnapped women", on http://bit.ly/Moz-Feijo-Eng

The most complete list of past present and future private military and security companies and present and future foreign troops in Mozambique is on Defence Web (SA, 7 Apr) on https://www.defenceweb.co.za/featured/an-overview-of-foreign-security-involvement-in-mozambique/