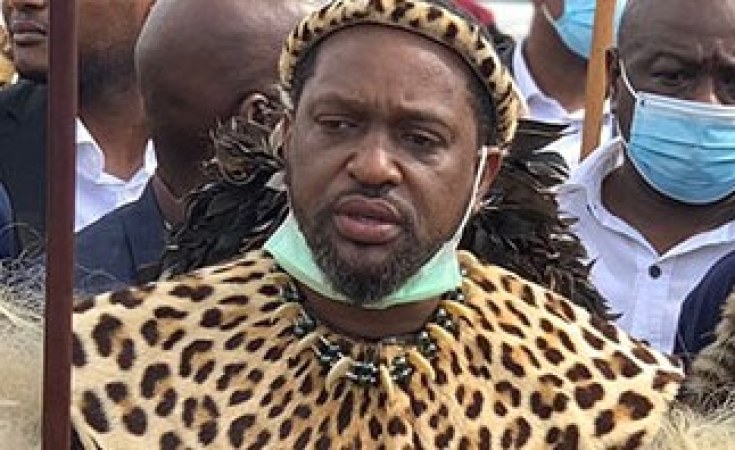 Prince Misuzulu -- whose name means "strengthening the Zulus" -- will take over as the next Zulu king, according to the will of his mother and regent queen. The announcement led to chaos at the royal palace.

Prince Misuzulu Zulu, the eldest son of South Africa's late Zulu King Goodwill Zwelithini and his recently departed regent queen, has been named the next monarch, as a succession battle plays out within the royal family.

The 46-year-old prince was named the heir to the throne in the last will of Queen Shiyiwe Mantfombi Dlamini Zulu, which was read out at the Royal Palace on Friday.

I "hereby nominate and appoint Misuzulu Zulu... as my successor to the throne," the late queen's will read out by advocate Griffiths Madonsela said.

The queen and regent died unexpectedly at 65 on April 30.

She was buried on Friday morning, just over a month after she was named interim successor to her husband king Goodwill Zwelithini.

Zwelithini, the longest-serving leader of South Africa's largest ethnic group, died on March 12 at 72 following a battle with a diabetes-related illness.

The former king spent more than half a century on the throne and left behind six wives and 28 children.

The regent's death last week set off a succession battle within the royal family, with various factions putting forward their candidates staking claim to the throne.

The letter that bequeathed the monarchy to the late queen's first son was dated 23 March, a day before she was named regent.

There were allegations that the regent was poisoned, and her husband's signature fraudulently added to his letter.

Chaos at the royal palace

The royal palace erupted into chaos soon after the televised reading of the will.

Two of the late king Zwelithini's daughters disputed the authenticity of the regent's will, according to the TimesLIVE news website.

Prince Thokozani Zulu, another member of the royal family and brother of the new successor, stood up to question the announcement.

"The Royal House should decide (on the succession) because the (late king's) will did not say who should take over from the queen," he said.

The prince was shouted down by screeching family members at the royal palace.

The newly named heir was then quickly whisked away by heavily armed security.

While the Zulu monarch's role was largely spiritual and ceremonial, with no executive power, King Goodwill Zwelithini was occasionally involved in politics.

He was the sole trustee of the Ingonyama Trust, which manages nearly 3 million hectares (7.4 million acres) of communally-owned land.

The monarch was also recognized by Zulu people around Africa, including in Malawi, Mozambique, and Zimbabwe.