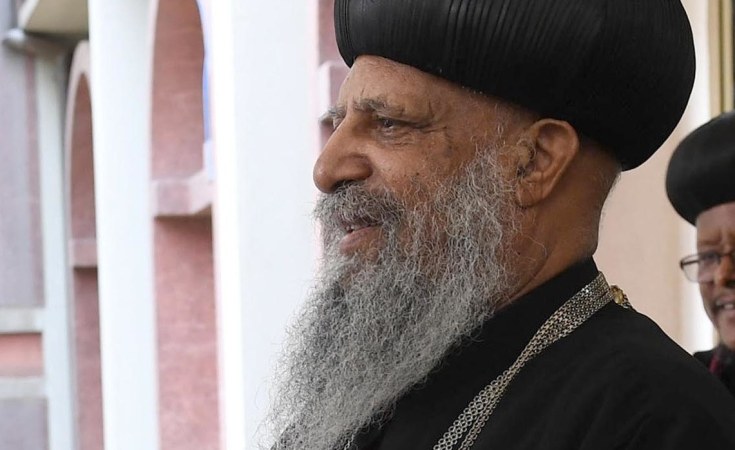 Abune Mathias, the head of the Ethiopian Orthodox Church, has accused the government of wanting to destroy Tigray.

"They are working day and night to destroy Tigray," he said in Amharic on the 14-minute video. "They have no rest when it comes to destroying Tigrayans."

These are the first public comments from Abune Mathias, originally from Tigray, since the beginning of the civil war six months ago. He says he has been stifled and censored by the government.

Public criticism by an Ethiopian figure against the prime minister, Abiy Ahmed, is rare.

However in the video, Abune Mathias described the violence as the carnage of people - particularly the killing of innocents.

The conflict engulfing the region pits Abiy's military against forces loyal to the Tigray People's Liberation Front (TPLF), which was once the dominant party in power.

"In all parts of Tigray there are killings. They mean to wipe Tigrayans from the surface of the earth," said Abune Mathias.

Abiy has repeated a number of times that the military is targeting TPLF leaders and not civilians. But reports out of the Tigray region have indicated otherwise.

HH Abune Mathias, Head of the Ethiopian Orthodox Tewahedo Church says "they want to destroy the people of Tigray" with actions of "the highest brutality and cruelty." He lived in exile for 30 years for criticizing country's then-communist regime. Now, He is under house arrest. pic.twitter.com/p8BegOpnfB - Mehari Taddele Maru (@DrMehari) May 9, 2021

Attacks on civilians, including numerous masscacres and gang rapes, have been documented.

Survivors blame Ethiopian troops and Eritrean soldiers, who are backing Abiy, of committing these war crimes.

Abiy, who won the 2019 Nobel Peace Prize, sent troops into Tigray in November after accusing the TPLF of attacking army barracks.

Abiy declared victory in late November after the army entered Mekele, the regional capital. But fighting continues there.

The Orthodox Church is Ethiopia's largest, with more than 40 percent of the population as adherents.

The French news agency, AFP, was in the Tigrayan town of Dengolat in February, where Orthodox priests said they were disappointed that Abune Mathias had not spoken out about the massacres committed on church grounds and in other parts of the town.

But they conceded that he and others might have been afraid of speaking publicly.

In the video, Abune Mathias decried the massacres and destruction that had happened in Dengolat and on church property.

He said he had tried to speak out against the war multiple times but the government had prevented him.

He had the chance after Dennis Wadley, the director of the US-based group Bridges of Hope International, who is also a friend, recorded the video on 26 April during a trip to Ethiopia.

"The patriarch asked me not to release it until I was out of the country, back in the US," Wadley told AFP.

An Orthodox official confirmed the authenticity of the recording.

World leaders believe that if the fighting continues, Tigray could turn into a humanitarian disaster.

Abune Mathias said he was worried about worsening hunger in Tigray and that farmers might not be able to plant this year.

"I call on international governments to try and find a way to stop this immediately," he said.