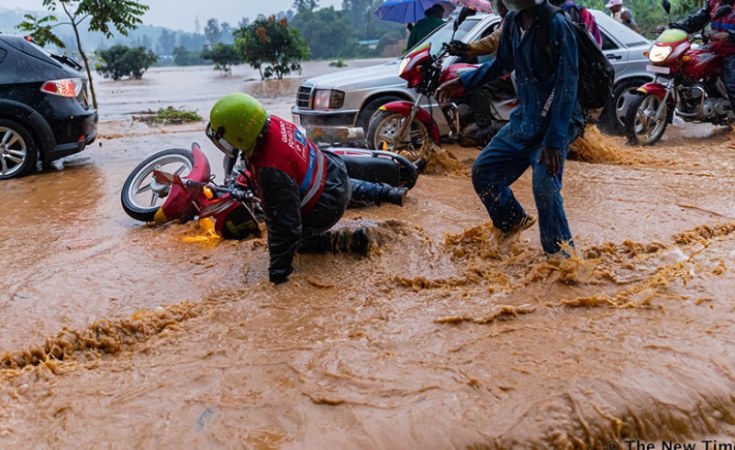 The rains that pounded the city overnight left flood-prone areas submerged, with emergency services concerned on the fate of people living near river banks and riparian areas.

The Kenya Meteorological Department had over the weekend warned of heavy downpours in the city that will continue throughout the week.

A forecast of the rainfall situation by the weatherman indicated that there will be heavy rainfall in the Nairobi region, Central Kenya and parts of the Eastern Region from Saturday.

Director of Meteorological Services Stella Aura, in the statement, called for measures to be put in place to avoid loss of lives and property during the rains.

Aura has warned Kenyans, especially motorists and pedestrians, to be on the lookout and be cautious while passing through moving water.

"It's going to rain heavy tonight. Everyone using the roads either as a driver or pedestrian is advised to observe extra caution. Avoid passing through moving waters. Keep safe," she said.

On Monday morning, along Mombasa Road, near Imara Daima estate, motorists were forced to use only one lane with access to several offices completely cut-off by the raging waters.

Some blamed the situation on the construction of the expressway saying contractors were spilling rainwater from their site onto the road.

Others blamed the perennial flooding challenge on poor drainage in the area.

@ntsa_kenya @KURAroads why should this happen?🗑🤦🏾‍♀️ Unnecessary traffic on Mombasa Road at Imara Daima to town. @Ma3Route Complete flooding giving pedestrians absolutely nowhere to pass!! Shame on you for this nonsense. pic.twitter.com/tvsdAJUhzk

Mark Lukale said that the road from Garden estate to Windsor "is now a big river! From Ruaka to Ndenderu is a nightmare. These roads need a 4×4. Balaa tupu na hii mvua."

The weatherman only replied by telling him that there was more rain coming.

Following the night rains, most roads in Nairobi were flooded but the most affected areas were Wetlands, South C, Thika Road, Parklands and Kilimani.

On Thika Superhighway, traffic started at the way from TRM Mall junction and snaked to the Central Business District.