Kenya: A Peek At the Guidelines for Establishing GBV Centres 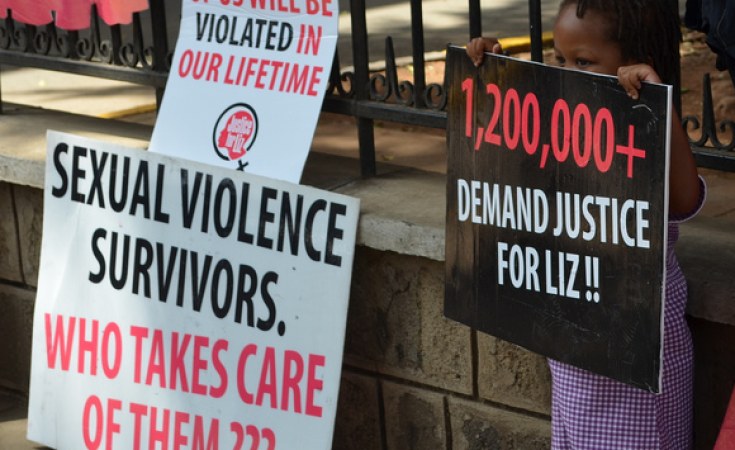 Coalition on Violence Against Women
(File photo).
The Nation (Nairobi)
By Okumba Miruka

The enormity of gender-based violence (GBV) nationally and globally, cannot be gainsaid whether relying on anecdotal or scientific evidence. The rather dated information from the 2014 Kenya Demographic Health Survey shows that one third of women aged 15 to 49 have experienced one or another form of GBV.

Additionally, a 2016 study by the National Gender and Equality Commission established that the average cost of treating a survivor is Sh16,464, which demonstrates the economic burden of this problem on the country.

Kenya has a number of laws dealing with GBV, the most prominent being the Protection Against Domestic Violence Act (2015), Prohibition Against Female Genital Mutilation Act (2011) and Sexual Offences Act (2006). These laws focus on prevention as well as response to GBV. Gender-Based Violence Recovery Centres (GBVRCs) fall within the realm of response, especially with regard to medical treatment and psychosocial rehabilitation.

These centres were pioneered by Nairobi Women's Hospital in March 2001. Since then, more have been established not only by private actors and charitable organisations but also by the government.

The most visible public GBVRCs today are in Moi Teaching and Referral Centre in Eldoret, Coast General Hospital in Mombasa, Kenyatta National Hospital in Nairobi and Makueni County Hospital.

That this idea has matured, is evident in the fact that the Ministry of Public Service and Gender has released Guidelines for the Establishment of Gender-Based Violence Recovery Centres in Health Facilities in Kenya (2020) to standardise their establishment and operations towards ensuring availability and affordability of services as well as justice to survivors.

The guidelines propose one-stop county-based facilities attached to hospitals where various sectoral actors will be available. It is envisaged that the centres will have the necessary infrastructure, equipment and supplies as well as 24-hour staff.

The one-stop approach intends to eradicate the tedium of a survivor having to "travel to other service delivery points for essential services not provided within the establishment". The intention is to have a combination of medico-legal, psycho-social and police services available at the centres. Gratifying in the guidelines is recognition of the needs of children and people with disability (especially those with speech and sight impairment) in the set-up of the centres.

Also notable is the proposal to the police not to insist that the survivor report the case where the offence took place and the other, to have government chemists in every region.

Inlaid in the guidelines is an assumption that more GBVRCs will be established. This is a tacit acceptance that GBV is here to stay, hence an admission of defeat in preventing it. One pertinent question as we angle to establish more of them is how we will measure success.

It is conventional to look at the caseload handled. In deed the guidelines list the number of cases handled among the indicators. The fallacy in such an indicator is that it could be misinterpreted. For example, should an increase in numbers of GBV reports be taken to mean success? Certainly not since this is evidence that we are unable to stop the scourge. In fact, a good indicator would be the number of GBVRCs closed as we eradicate GBV. Proliferation of GBVRCs should, therefore, be discouraged.

A close look at the guidelines raises a number of concerns. First, acknowledgement in the guidelines that establishment and operation of these centres is resource-intensive, brings into question their potential sustainability. In this context, one wonders whether their establishment should be encouraged or if other models should be considered. Second, the guidelines do not articulate how physical confidentiality when reporting, a cardinal principle in handling GBV, will be ensured.

Third, the bulk of the document regurgitates conventional roles of different actors without providing minimum standards that they should adhere to in delivery of the services.

Furthermore, the guidelines are long on generalities that one can find in any well written manual on GBV but short on technical details that one who wants to set up a GBVRC would gain from, such as space, layout, staff and equipment requirements.

Be that as it may, implementation of these guidelines should not only focus on medical treatment for survivors but also emphasise justice through mandatory prosecution of perpetrators.

The guidelines should also be implemented in close synchronisation with the Victim Protection Act 2014, which requires that victims of crime be compensated by the perpetrator or the State through the statutory Victim Protection Trust Fund. Whether the fund has been established and operationalised is unclear. If yes, then it should be publicised.

In furtherance of the justice component of the guidelines, the established centres should also have in-house paralegals and legal counsels to support survivors.

The writer is an international gender and development consultant and scholar. okumba.miruka@gmail.com