Morocco: The Moroccan Landscape, Traditions and Communities Behind Argan and Its Oil 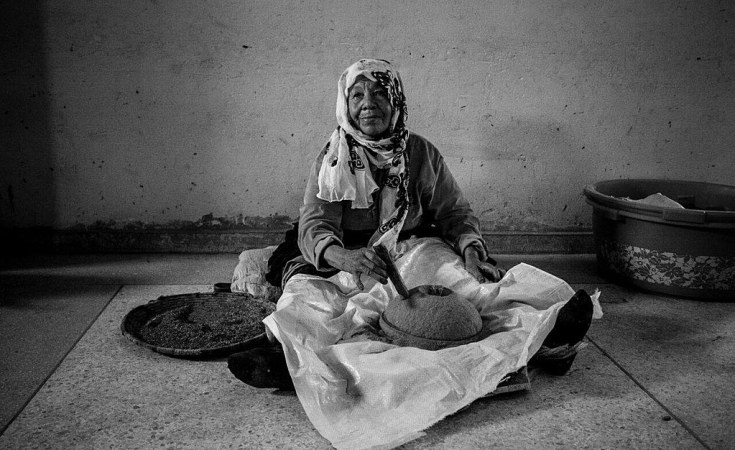 Celebrating argan trees as part of a remarkable agricultural heritage

Just south of the busy city of Agadir lies the rural Chtouka Ait Baha region of Morocco. Despite its proximity to several spots along Morocco's tourist trail, Chtouka Ait Baha's empty desert mountainscapes are worlds away from the colourful, bustling streets of the country's cities. However, the relatively remote area is home to the incredible argan tree. A treasure of Morocco, the argan tree not only provides one of the country's most valuable exports, argan oil, but is also endemic to the region and only grows naturally in and around Morocco!

These drought- and heat-resistant trees have been cultivated for centuries in the Ait Souab-Ait Mansour area of the Chtouka Ait Baha region. Argan trees can withstand temperatures of up to 50 degrees and play an irreplaceable role in the lives of the region's communities. Local people living in these arid and semi-arid lands have created an incredible production system based on the argan tree. These local communities make oil and other products from the argan trees, farm on the land around the trees and rear goats who scale the short trees and eat argan nuts. For this reason, it is known as an agro (farming)- sylvo (trees)- pastoral (goats) system.

FAO designated Ait Souab-Ait Mansour a Globally Important Agricultural Heritage System (GIAHS) in 2018 to recognize the communities' unique and resilient agricultural practices and valuable cultural heritage that have preserved this outstanding landscape and biodiversity. This argan-based, agro-sylvo-pastoral system is just one of the 62 innovative GIAHS sites.

So what is argan used for?

Argan oil is the main product of the argan tree and perhaps its most well-known product globally. It is made from the nut of the fruit on the Argan tree and is used both in cooking, in a similar way to olive oil, and cosmetics, for nourishing both skin and hair. Extracting the oil is a lengthy business - in fact, 50 kilos of fruit are needed to produce just half a litre of oil, which is why argan's market price is usually much higher than that of olive oil. Since the 1990s, when the food, cosmetic and therapeutic virtues of argan oil became more well known, this hidden treasure from the depths of Morocco has made waves on the international market too.

Argan products are a key source of income for communities in the area, and for centuries argan oil has been prepared at home by rural women in the argan grove areas using family recipes. The women break down the hard shells of the pits with a stone, and extract and chop the kernel, before adding some warm water to help extract the oil. The making of argan oil is also a social occasion for the women get together.

The argan tree also produces excellent quality wood and charcoal, which is highly valued throughout the region and has long supplied most of the big cities in Morocco.

The area is a biodiversity hotspot where argan trees are grown together with more than 50 cultivated plant species with 102 local varieties, all endemic to the region, and 16 local breeds of cows, sheep, goats, camel, equines, poultry and honey bees. The livelihoods of local communities are tightly linked to this biodiversity, which provides food, animal feed, seeds and income. Argan trees are the pillar of this traditional agricultural system, playing a key role in the ecological stability of the region and providing most of the farmers' income. However, the integrated system also provides the communities with other food and material such as staple crops, cereals, firewood, meat and wool.

Local communities have developed many clever ways of using the land, including agro-forestry practices that are highly resilient to the arid, water-scarce environment and poor soils. For example, given that arable land is limited and the area is mountainous, farmers have shaped flat, terraced areas on which to grow their food. The stone terraces help the soils retain water and reduce erosion so that the crops can be grown under rainfed conditions.

Water is critical in such a dry, arid climate and local farmers have developed a water management system that has been passed down over the centuries. In addition to the long canals built along the slopes of mountains, agro-pastoralists have carved large rain-water reservoirs, called Matifiya, into rock underneath the ground. These large underground caverns catch and filter water from the land above and are so effective at collecting water that locals can continue their livelihoods despite long dry periods.

It is not just the collection of water that is so impressive, but also the way it is managed. The management of water resources is organised through local Jmaa - a 'committee of wise persons'. The Jmaa organises collective goods like water and solves disputes between village members. The Jmaa's decisions go undisputed, as they have built up respect over many generations and are a key part of society.

The United Nations has designated 10 May as the International Day of Argania, a chance to recognise this valuable resource and the local communities that process and farm it. On this day, we celebrate argan, the Ait Souab-Ait Mansour GIAHS site andtraditional communities worldwide whose innovative farming techniques increase resilience to climate change and boost food security.